My Daughter Is A Ghanaian Jew. Trump Just Called Her Shit 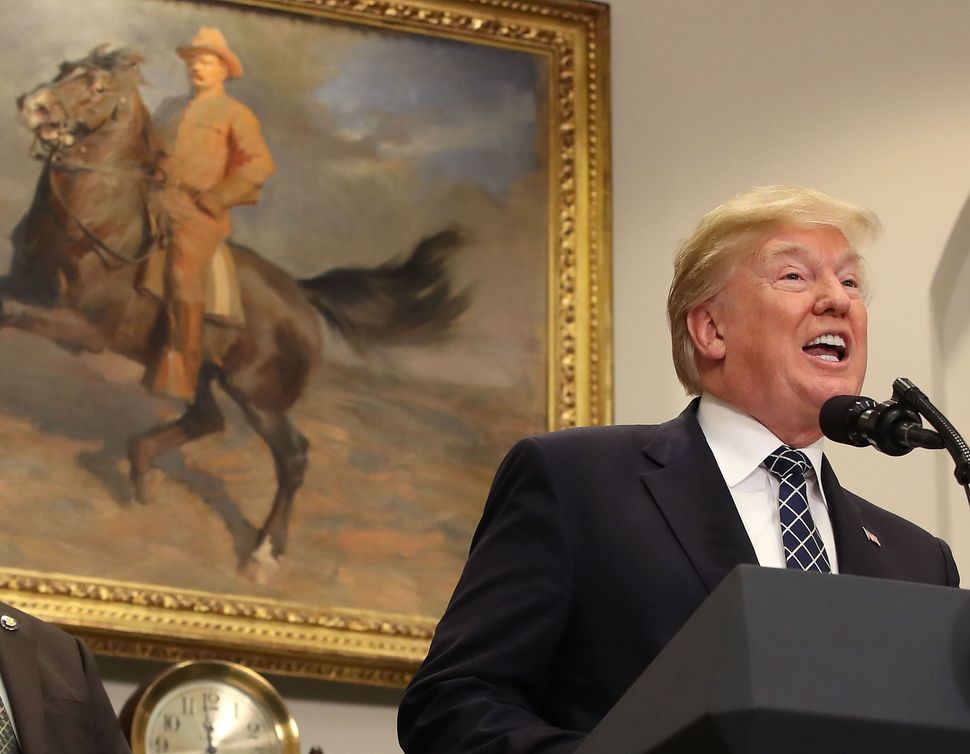 And according to our president, they are shit.

When President Donald Trump said on Thursday that he doesn’t want people from “shithole” countries to come to America, he was not commenting on the political, social, or economic challenges a country faces. He was claiming an entire continent of 54 individual countries and a country largely descended from slaves stolen from that continent, is shit. And he is claiming that their inhabitants are shit. They are shit from shitholes, and therefore are not welcome here. They are not worthy of a life in America. They are not equal to us. They are not the same as us. They are inferior.

It’s racist, and racism cannot be reconciled with Judaism. As Jews we believe that God made people in God’s divine image, b’tzelem Elohim bara otam. We cannot reconcile the idea that the divine essence of God is in all humans, with the idea that some people are human excrement.

B’tzelem Elohim is not written with an asterisk that says “But Not Africans.”

How painful it is that we heard of Trump’s disgusting comments on the eve of the eight-year anniversary of the devastating earthquake in Haiti. Eight years ago today, I was a fellow at Jubilee USA Network, a small non-profit that fights for debt cancellation for highly indebted poor countries. We had been fighting for a debt cancellation deal and working with many members of the Haitian community in the US when the earthquake struck.

My memories of my Haitian colleagues that day are seared into my mind forever. I spoke with colleagues who were unable to reach their family, terrified they may be buried alive, who were still plowing forward, working harder than ever for their country. I comforted orphanage workers who were looking for children presumed dead. I spoke with volunteers holding two phones, one for calling their Member of Congress and one for calling their missing family. I was honored to work beside them and stand with them when Haiti’s debt was cancelled. They are not less than.

I work with a youth organizing fellowship in Zambia doing incredible volunteer community organizing work, leading trainings, letter writing campaigns and giving radio interviews on the need to fund the fight against HIV/AIDS, TB, and Malaria. I have learned more from them than any organizing training I attended. I train and support youth in the US to do organizing and advocacy work as well. I often work with African Immigrants who share heartbreaking stories of personal tragedy and triumph. They are not less than.

They talk about family members lost and legislation that could save lives. They are non-partisan advocates for the end of poverty doing the incredibly difficult work of advocacy in their spare time while becoming doctors, nurses, development professionals and business people. I am honored to serve them. We are blessed to have them in America and they will make us a better country. They are not less than.

This morning after breakfast, I watched my beautiful daughter showing off how she can crawl up and down the stairs. Giggling and grinning, she climbed all the way up and scooted backwards all the way down, so pleased to be growing up.

She will have so far to climb in life, and her climbing will be harder than mine was. She needs the Jewish community to speak up for her.

Please speak up this Shabbat and honor the memory of those who lost in Haiti eight years ago today. Please raise your voice today and everyday against the racism coming from this White House. Name the truth that we are living through. Speak up for my daughter so when she is old enough to know what hatred is, she will know that the Jewish community is behind her.

I urge Jewish Americans to condemn President Trump’s recent comments on Africa and Haiti and to lift their voices and speak the truth: President Trump is a racist.

Carly Pildis is a political organizer and advocacy professional based in Washington, D.C. Follow her on Twitter, @carlypildis.

My Daughter Is A Ghanaian Jew. Trump Just Called Her Shit