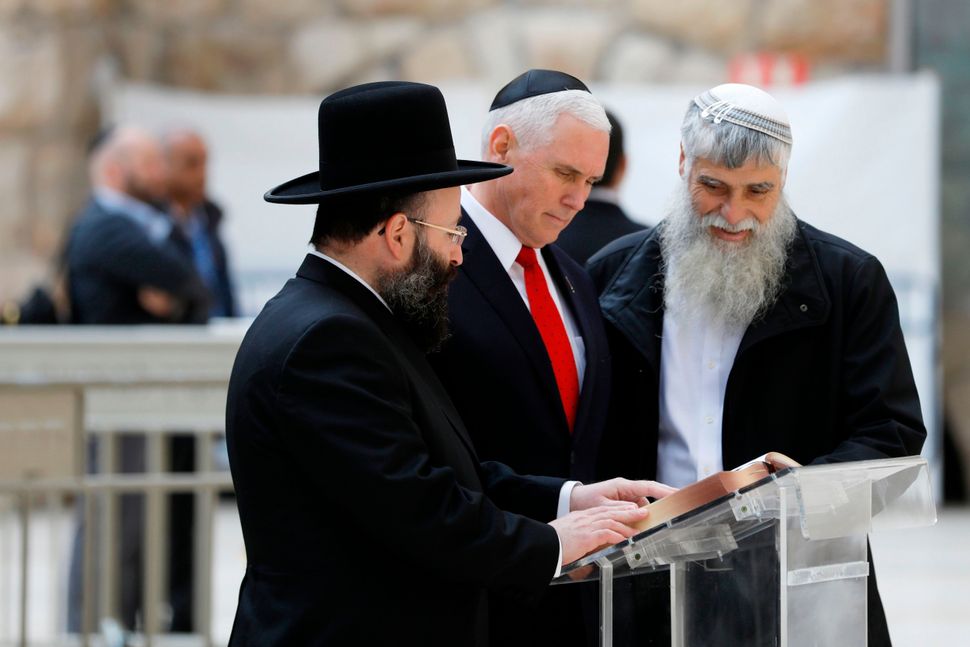 Vice President Mike Pence may have just become the first Christian visitor to Israel not to set foot inside a church. Palestinian Christians boycotted his visit this week, still furious over the Trump administration’s decision to recognize Jerusalem as Israel’s capital, so Pence never saw Bethlehem, or Nazareth, or the Holy Sepulchre.

Instead, like a good Jewish tourist, he visited the Western Wall, Yad Vashem and the Knesset.

The Pence fiasco is part of a larger pattern of American evangelicals who are in love with a fictional Israel, fictional Jews and even fictional Christians, and blissfully ignorant of actual ones.

On a superficial level, you can see this play out every day in Jerusalem. Tidy, white American families find themselves astonished at the chaotic smells and bells of the Holy Sepulchre and other Christian sites, not to mention the exotic-looking Copts, Greek Orthodox, Russian Orthodox and Armenians. These Christians look like Arabs! Some of them are Arabs!

But the fantasy, and the ignorance, runs deeper.

First, there are the Christians whom Pence was supposedly in town to save. The great irony of Pence’s visit is that it was, in part, supposed to be about protecting Christians from persecution. Only, no one asked any actual Middle Eastern Christians what they thought.

Had they asked, and listened, they would have learned that these Christians are outraged at the Jerusalem decision and at the Trump administration’s embrace of the settler right. They would have learned that the Palestinian Christian minority often has a fraught relationship with Palestinian Muslims, but that it has nothing to do with American fantasies of “terrorism” or the Islamic State group or Islamophobic myths of intrinsically violent Islam.

Likewise Christian populations in Egypt and Jordan, the leaders of which also refused to meet with Pence. Thanks but no thanks, they said.

Second, 77% of American evangelicals believe that we are living in the end times — that the Rapture will take place in their lifetimes. As is well known, this belief animates a great deal of Christian Zionism, which supports Jews moving to Israel not because it’s the startup nation but because it’s the future site of Armageddon. The miraculous rebirth of Israel has fulfilled biblical prophecy, but to complete it, Israel needs more Jews.

This has long been an open secret, and a bit of a joke, among Jewish Zionists. Let’s just agree to disagree, Jewish Zionists have said. We’ll take the Nefesh B’Nefesh money now, and see who’s right about the Messiah later. We’ll play the part of your fictional Jews moving to Israel for the apocalypse, while you pay for real Jews to come and settle in Netanya.

Even this jig may be up, however. Over the past decade, Christian Zionism has evolved. Christians United For Israel is now dominated not by Jerry Falwell- and John Hagee-style evangelicals but by charismatics, Pentecostals and members of the New Apostolic Reformation. Most of these sects believe that the “spiritual restoration” — that is, conversion — of the Jews is required for the end times events to begin.

Moreover, believing that the world will end in the 21st century has real impacts on policy. You won’t be so worried about climate change — which has already hit Israel disproportionately hard — if you think the rapture’s about to happen anyway. Nor will you be concerned that the abandonment of the two-state solution sows the seeds for greater unrest and violence. On the contrary, violence in the Middle East is a good sign, since it portends the imminence of the rapture.

Indeed, though the threat of IS is now greatly diminished, the apocalyptic prophecies of IS and American evangelicals had a great deal in common: a final battle between the forces of Christianity and Islam, an Antichrist-like figure reigning in the Middle East and, finally, the rule of the Messiah after a period of tribulation.

American evangelicals’ end-times beliefs are not harmless, then. (To be clear, Pence has not stated whether he shares the eschatological views of 77% of his co-religionists.) They support policies that are clearly not in the interest of stability – recognizing Jerusalem as Israel’s capital, for example – precisely because instability is a sign that things are going according to plan.

Chaos may be good for fictional Jews, as long as they are spiritually restored before the tribulations begin. It’s also good for those Jews who prefer the fictional Israel of nationalism and rebirth to the real, messy Israel of coexistence and compromise. But it’s bad for anyone who values reality.

Finally, there are the fictional Jews of American evangelical philo-Semitism. More and more evangelicals now hold Passover Seders, sing songs in (broken) Hebrew, display Jewish stars and other Jewish insignia, and see themselves as the “real” Jews following in the footsteps of Yehoshua ben Yoseph.

Some of this is cute (the broken and misspelled Hebrew especially), but only if you stay on the surface. Really, this philo-Semitism is Christian supercessionism, with Christians supplanting actual Jews as God’s chosen people. It’s creepy.

Meanwhile, of course, Pence and his colleagues are implementing social policies that the overwhelming majority of American Jews disagree with: restrictions on reproductive freedom, ever-expanding religious exemptions that primarily benefit Christians, massive funding subsidies for overwhelmingly Christian religious schools, the re-centering of Christianity in American public life and, in general, the erosion of the garden wall between church and state.

Fictional Jews love these policies, because they will save more souls in time for the imminent Judgment Day. Many Orthodox Jews like them, because they generate revenue for Orthodox schools and align with some Orthodox Jewish political views. But most actual Jews know that when the wall between church and state is eroded, tiny minorities like ours will suffer.

Mike Pence’s Christian-less Christian mission to Israel has ended. But his confusion of truth and fantasy continues to make real trouble.