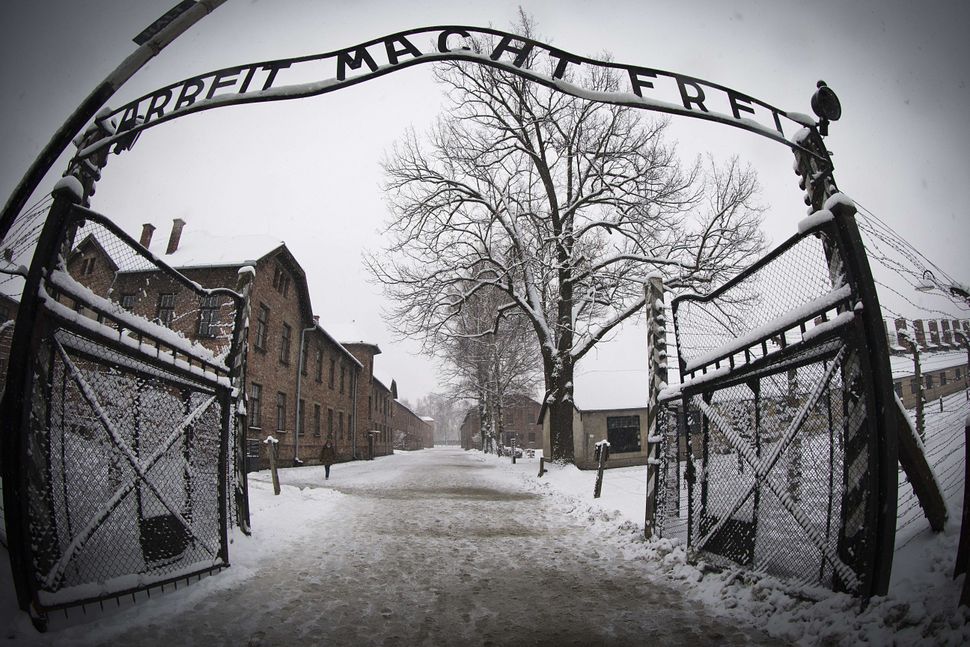 The outrageous move by the Polish legislature to punish anyone blaming Poles for the crimes of the Holocaust is wrong on so many levels. It is an anti-democratic attempt to limit free speech and academic inquiry. It is a cynical ploy to whitewash the real horrors of World War II. It is deeply offensive to Jews everywhere, especially Holocaust survivors.

But to me, it’s a natural outgrowth of a strain of virulent Polish nationalism that I witnessed first hand on a reporting trip three years ago and that has grown stronger and more worrisome since.

I visited Poland with an admirable organization called the Forum for Dialogue Among Nations, which promotes reconciliation between Poles and Jews, and had the opportunity to experience a real renaissance in Jewish life, permitted if not always supported by the Polish government. The gleaming new Jewish museum in Warsaw. The bustling JCC in Krakow. The absence of glaring anti-Semitism and anti-Zionism.

Thousands of Poles were recognized as helping to save Jews during the Holocaust, and their descendants are clearly seeking to create a more tolerant society.

Yet alongside this hopeful spirit lay a deep resistance to acknowledge Poland’s complicity in its Nazi occupation. Poles were the victims of German aggression in World War II, absolutely. They were also the victimizers and the enablers. The concentration camps and the ghettos and the roundups could not have existed without Polish knowledge and, at times, Polish assistance.

There’s a reason so few surviving Jews wanted to return to Poland after the war, or soon fled if they did return. They knew they were not wanted.

There’s a reason that anti-Semitic attitudes in Poland are among the highest in Europe, even though there are no more than 25,000 Jews left in the country, and that is a generous estimate. Those attitudes don’t persist in a vacuum.

This duality courses through a nation that has still not come to grips with its past. The war ended more than 70 years ago, but the Soviet Union’s repressive grip was not released until 1989, and Poland has had barely a generation to process honestly its supporting role in the Nazi regime. So its extreme defensiveness is, to a degree, understandable.

But it cannot be acceptable, especially because legislation like the one now pending in the upper house flows from a far-right government that is cracking down on many aspects of liberal democracy.

News reports last night said that Israeli Prime Minister Benjamin Netanyahu will hold talks with the Polish government to resolve the concerns about the legislation. Even if it is withdrawn, the very fact that this legislation has come so far exposes a fundamental cancer in the Polish psyche — because an inability to come to terms with the past will always cloud the present and disfigure the future. That’s one of the many lessons of the Holocaust that Poland has yet to learn.

May you be inscribed – for a good vote? Jews in America are a distinct minority, and I’m fine with that. I don’t expect the workplace, the government or the broader culture to make grand accommodations for our unique calendar. Until I joined the Forward, I had to use my vacation time for Jewish holidays and I considered that the price of being part of our amazing tradition.

But New York State is home to the largest Jewish population outside of Israel, and there is something off about the fact that the fall primary election is scheduled for the second day of [Rosh Hashana](https://forward.com/schmooze/320610/rosh-hashana/ “Rosh Hashana”)hh”) this year. I am willing to believe the decision to schedule the vote that day was a function of cluelessness rather than malevolence, but it’s bad civics. Turnout is low enough for primaries, even though in this heavily one-party state, that is often the consequential balloting.

So state officials: Find another Tuesday. We’ll say an extra prayer for you with our thanks.

What else I’ve been reading: Ruth Marcus, deputy editorial page editor of The Washington Post, had the best, clearest, most damning column I’ve seen about Hillary Clinton’s unwillingness to confront a sexual harasser on her staff. Read it and weep.

As we prepare to watch — or ignore — President Trump’s first State of the Union address tomorrow, I found Ezra Klein’s powerful and disturbing Vox essay another must read. Klein’s thesis is that Trump is winning and the country is losing. Another reason to get out the tissues.

Looking forward: My interview with Justice Ruth Bader Ginsburg is this Thursday evening, and I’m busily finishing up my list of questions. Thanks to all who suggested your own questions, signed up for the livestream, and offered to host a watch party. For more information, go to forward.com/rbg