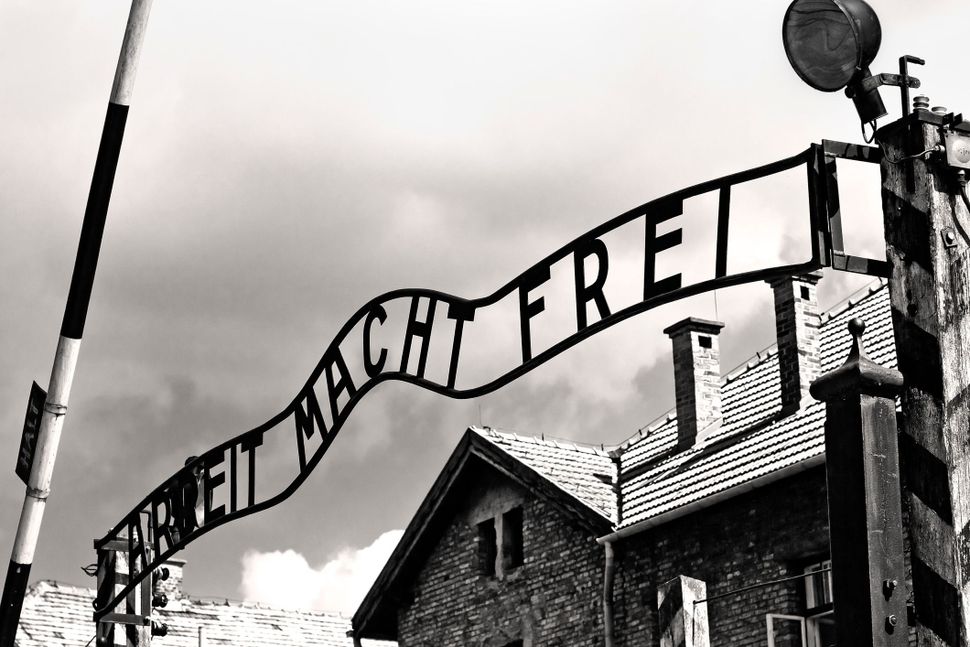 The bus from Warsaw to Rzeszów, Poland, breaks in Kielce. A small city in southwestern Poland, over 50 Jews were killed in Kielce by their Polish neighbors after returning from concentration camps in 1946.

I found myself in Kielce en route to a Holocaust Commemoration week in the Podkarpackie Voidodeship, a mostly rural, deeply conservative region in southern Poland that before the war was home to many significant Hasidic communities.

Organized by the venerable Professor Wacław Wierzbieniec, a Catholic Pole profoundly committed to the history of Podkarpackie’s Jewish past, Jews and allies had come from around the world to pay homage to their ancestors, to remember the victims, and to spread a message of tolerance.

The bus stopped and I was thirsty. I wanted to buy a drink. But immediately, the ethical implications came to the fore, as they often do for a Jew like me living in Poland. Could I spend money where Jews had been slaughtered in the streets?

A young Polish girl a few seats ahead of me, smiling and playful, exited the bus and started to walk towards the town. Surely she holds no responsibility for what happened here 72 years ago, I thought. But what of her accompanying grandmother? Who holds blame 70 years on?

Not Poles, or so the Polish government believes. This past Friday, ahead of Holocaust Remembrance Day, the lower house of the Polish parliament voted in favor of a bill aimed to quell “anti-Polish” language and ideas in relation to the Holocaust. As of Wednesday, the upper house of parliament had approved the bill, which now awaits signature into law by President Andrzej Duda.

The law criminalizes the use of the phrase “Polish Death Camps” to refer to Nazi Concentration Camps, the former being an historical inaccuracy if taken to mean camps instituted by the Polish state or people (the camps were Nazi camps in Poland).

More controversially, the law also criminalizes reference to the role of the “Polish nation” or “Polish state” in any violence more broadly: “Whoever accuses, publicly and against the facts, the Polish nation, or the Polish state, of being responsible or complicit in the Nazi crimes committed by the Third German Reich… or other crimes against peace and humanity, or war crimes… shall be subject to a fine or a penalty of imprisonment of up to three years.”

The law has elicited condemnation in the US and Israel. The US State Department has expressed concern that “if enacted this draft legislation could undermine free speech and academic discourse.” Yad Vashem has criticized the sections of the law which ban accusations of Polish crimes against humanity more broadly, which may, “endanger the free and candid discussion of the part of members of the Polish people in the persecution of Jews during the [Holocaust] period”. And most recently, the Israeli Knesset has introduced legislation calling Poland’s new bill Holocaust denial.

Marcin Makowski has pointed out in these pages that the bill is meant to distinguish atrocities committed by individual Poles from Polish responsibility overall as a state. Furthermore, the bill has exclusionary provisions for scientific research and artistic activity.

But what of journalism? The bill is vague on this front — which presents a huge threat to reporters and writers. If passed and enforced, the law could certainly end up chilling speech, including speech critical of anti-Semitic Polish violence and even of the current government, which has made Polish victimhood under Nazi occupation a forefront political issue.

But the politics of this moment have been long in the making.

The Polish Embassy on Twitter has long made a habit of calling out anyone who mistakenly uses the phrase “Polish Death Camps.” And, as Allison Kaplan Sommer described in Haaretz, the Polish government has long made the misappropriation of Nazi efforts to Poland a point of consternation.

Here, the Polish government certainly has a point. They were Nazi – not Polish – death camps, and three million Poles were also slaughtered by the Nazis. And yet the history is more complicated.

In his book “Fear”, Jan Gross describes the over 1,500 incidences of Poles murdering Jews following World War II. The book also pieces together for the first time primary sources to depict the pogrom in Kielce. And the Kielce pogrom was far from the only one.

We should not blame all Poles, or the contemporary Polish state, for the acts of individuals and communities. But this bill goes much further than the misrepresentation of concentration camps warrants. It takes reasonable outrage at one phrase and spirals it into a potential silencing mechanism deeply in-line with the government’s broader historical revisionism of Polish anti-Semitism.

For a Jew living in Poland, this is anything but simple.

But in recent years, the Polish government, with the help of a British-Israeli named Jonny Daniels and anti-Semitic elements of the Catholic Church, have begun to confer the title to Poles without Yad Vashem’s authentication.

Daniels has been providing cover to the government in these but also other efforts, helping sanitize problematic and even anti-Semitic elements. In these pages, Larry Cohler-Esses has written extensively about Mr. Daniels’ efforts in Poland, like Daniels’ promotion of anti-Semitic stereotypes. Once, on TVP, Poland’s state television network, Daniels warned Poles that “leftist Jewish media continue to attack Poland and will continue to show Poland as a racist country,” which they do because “they profit by doing so.”

From downplaying Polish pogroms to allying with the extremist Catholic Priest Father Tadeusz Rydzyk, who has received broad condemnation for anti-Semitic statements, Daniels goes a long way towards enabling Poland’s worst nationalist tendencies, giving cover to anti-Semitism with his Jewishness. In an interview I did with Wirtualna Polska, Marcin Makowski explicitly cited Daniels performing a blessing on a former Polish prime minister as evidence that anti-Semitism no longer exists in Poland.

The presence of the “Righteous” Poles Daniels, the government, and the church publicize was constant throughout the Commemoration I attended in Podkarpackie. On the table in the room where a Jewish Holocaust survivor was speaking were pamphlets from the government-allied Institute of National Remembrance (Instytut Pamięci Narodowej) with titles such as “Discover the stories of Poles who helped Jews.” Righteous Poles were the crux of one city’s mayor’s speech during a prayer service in the former Jewish cemetery, and Jews were asked to read the names of Righteous Poles in one of multiple church services held throughout the week.

Of course, there were Righteous Poles. But there were also many who were not. Conflating the commemoration of Jewish victims with the Poles who acted righteously – a constantly inflating list – turns Holocaust memorial into an opportunity for today’s Jews to thank the Poles, and to stoke the Polish nationalist ego. It becomes a means for what Jan Grabowski has termed the “de-Judaization” of the Holocaust, the practice of Holocaust remembrance becoming the conduit of Polish martyrdom.

While the truly, authenticated Righteous should be celebrated as heroic role-models, the government’s appropriation and manipulation of this narrative is nationalistic, ahistorical in emphasis, and a disgrace to the memory of the Jews who died by Polish hands.

And yet, like on the bus in Kielce, we must reconcile competing ethics. Teaching about the Righteous could engender a sense of responsibility to not be a bystander. This compassion is sorely needed in a country refusing African and Middle-Eastern refugees. It is sorely needed in our own country. Can we teach, honor, inspire through the Righteous narrative without denying the history of anti-Semitism?

The little girl from the bus, the young Poles who lit torches and marched on November 11th, myself, none of us created this. But we don’t have the choice not to engage it.

Regardless whether we find a way together or apart, regardless whether the government’s law portends further crackdown, there is but one certainty: This is a place of profound hurt, for Jews, Poles, and all who remain to live in the past’s wake.