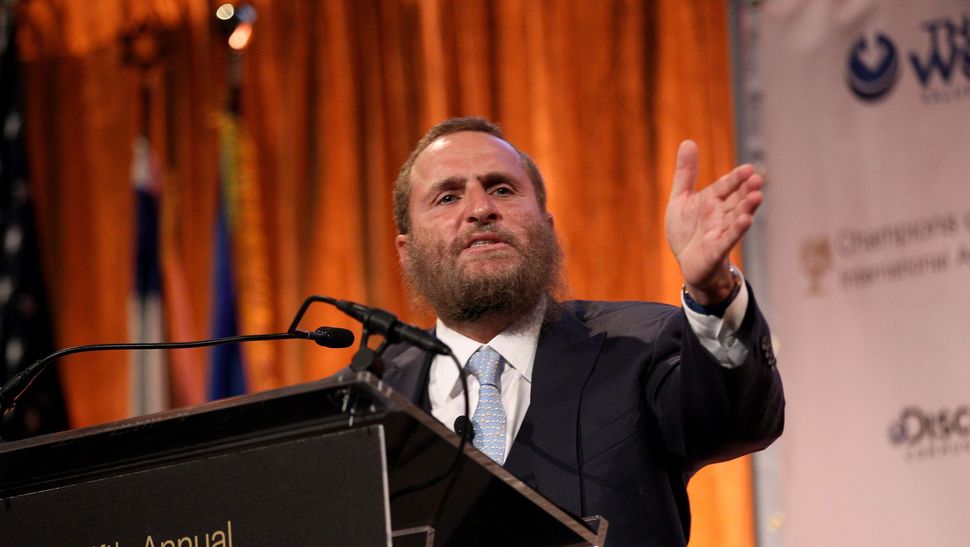 This piece has been updated to include a statement by Shmuley Boteach.

America’s right-wing Jewish community has recently been split over a curious question: whether to cozy up to Qatar. After a number of American Jewish Zionist leaders visited the tiny Gulf country rich in gas, Rabbi Shmuley Boteach began denouncing both Qatar and the Jewish leaders in op-eds in a variety of news outlets.

But as it turns out, Boteach himself may have been in talks to visit Doha up until just two days before his first attack ad. So says Nick Muzin, head of Stonington Strategies, which has been organizing the trips to Qatar for the Jewish leaders.

“I had a series of conversations with Boteach in August and September 2017 regarding his interest in meeting with the emir in New York, and in subsequently leading a delegation to Doha under the auspices of his ‘World Values Network,’” Muzin wrote in a statement to the Forward. After agreeing to speak to the Forward, Boteach pushed off the call and did not respond to a list of questions the Forward emailed, nor to subsequent phone calls as of this writing.

Ever since a Saudi blockade against Qatar began in June, the emir of Qatar, Tamim bin Hamad Al Thani, has been on a charm offensive, attempting to end the siege through diplomatic means.

The charm offensive had a lot to overcome, including Qatar’s ties to Hamas, which is on a U.S. list of terror organizations, as well as its sponsorship of the state-funded Al Jazeera network, viewed as hostile to Israel and even anti-Semitic.

One of the methods Qatar has been using to make inroads in the United States has been to court American Jews — specifically, right-wing Zionist Jews. The Qataris hired Muzin, an Orthodox Jewish doctor, lawyer and Republican lobbyist. Muzin’s fee, originally $50,000 a month, has ballooned to $300,000.

Among those flown to Doha were Alan Dershowitz, Malcolm Hoenlein of the Conference of Presidents of Major American Jewish Organizations, Morton Klein of the Zionist Organization of America and Menachem Genack of the Orthodox Union.

The trips were controversial. But no one was more vocal than Boteach. The man who calls himself “America’s Rabbi,” whom I profiled in 2014, expressed vociferous outrage in a number of op-eds published since September.

On September 9, he took out a full-page ad in The New York Times condemning Qatar, and started a GoFundMe campaign to pay for it.

“The Emir of Qatar is coming to America bearing gifts,” the ad reads under an image of the emir surrounded by disembodied hands holding hairspray, a brush and a blow dryer. “He’s hired a Jewish lobbying and PR firm to clean up his country’s image as one of the world’s foremost sponsors of terrorism and the principal funder of Hamas.” It ends with big block letters: “Meeting with Qatar condones murder.”

But Boteach was just getting started. Two days later, in an op-ed in The Jerusalem Post headlined “Which Jewish Leaders Will Meet With Qatar?” Boteach wrote, “If it seems incredible that Jewish leaders would meet with the leader of a country who finances the murder of Jews, that’s because it is. Which is why our organization, The World Values Network, took out a full-page ad in this weekend’s New York Times to condemn the PR effort.” Meeting with the emir is something “no Jewish leader should agree to,” Biotech wrote.

Then Boteach started going after specific guests of the emir. After it came out that Dershowitz had been to Doha, Boteach wrote a column in The Jerusalem Post denouncing the visit as “shilling for a terrorism-financing regime,” and another calling Dershowitz “the latest Jewish junketeer to succumb to the lure of a free visit to Qatar and parrot the emirate’s propaganda.”

And in another op-ed, Boteach cited Steve Bannon, former White House strategist and head of Breitbart website, who “courageously” called out Qatar as a threat to the Middle East, as opposed to the Jews who were being either threatened or bought by Qatar.

“The passage of time will no doubt unearth information about the mysterious hold Qatar suddenly has on Jewish leaders, along with the strange, deafening silence that has gripped so many communal organizations, while the chief funder of Hamas slowly spreads its tentacles and its resources in elite New York Jewish circles,” Boteach wrote.

But despite the vitriol, Boteach himself was eager to participate, according to Muzin, asking both for a meeting with the emir in New York and to lead a delegation to Doha.

“I regret that we were unable to make either of these happen,” Muzin wrote in a statement.

A source close to the matter revealed the reason that Muzin was unable to make it happen: The Qataris themselves nixed Boteach from a list of prospective visitors. “They did not find him to be credible and didn’t believe he had a significant following or constituency,” the source said. Furthermore, “The Qataris did not feel he could be trusted to keep sensitive issues to himself.”

The source also said that Boteach had demanded a six-figure fee for the proposed visit.

Phone records obtained by the Forward show text messages between Boteach and Muzin beginning in August and leading up to September 7, when they appear to culminate in a phone call.

At least one of Boteach’s targets wasn’t surprised.

“I am not surprised, because it was clear that there was something beyond the merits that was motivating Boteach,” Dershowitz told the Forward. He also emphasized that “the relationships among Qatar, Israel and the U.S. are nuanced, changing and complex.”

Update: Boteach supplied the Forward with the following statement:

“It is sad that the Forward has fallen prey to the lies of Qatar’s $300,000 a month PR man, Nick Muzin, who is being paid to whitewash the Emir’s financing of Qatar and destroy Qatar’s Jewish critics. The Forward’s story, with its silly, almost juvenile headline, contains not a grain of truth, is wholly and completely fraudulent, constitutes the most serious libel, and was written without a shred of evidence. Not a word of it is true and the discussion of money in particular is disgusting, fraudulent, and beneath contempt. It constitutes the most serious libel which will be dealt with in due course. The Forward called my office giving us only four hours to respond to this story, even though I was traveling in a completely different time zone and could not be reached.

When my once-friend Nick Muzin originally called me last fall to tell me he would be accepting Qatar as a client, I pleaded with him not to and told him he’d be betraying Israel by doing so. Ambassador Ron Dermer has made it clear now publicly, twice, both to Forbes magazine and to Haaretz just last week, that Israel opposes both Nick’s efforts on Qatar’s behalf as well as the Jewish junketeers who are humiliating themselves by traveling on the Emir’s dime to whitewash Qatar.

I had been warned from the outset by the Emir’s hired agents, when I first categorically and absolutely refused to join the parade of Jewish leaders, like Alan Dershowitz, disgracing themselves by meeting the Emir, and pledged to lead a campaign to stop the whitewashing of his terror-financing government, that I would be attacked and defamed. I received a direct email threat again just last Thursday that I should stop criticizing Jewish leaders accepting the Emir’s all-expense paid junkets or I would pay a steep price.

I never believed, however, that it would be a Jewish publication who would be duped by Qatar into the defamation of Jewish leaders who oppose their funding of Hamas and alliance with Iran. The Forward should give serious consideration to whether they wish to undermine their credibility further by being enlisted in Qatar’s PR and lobbying campaign and its enablers.

Our organization is proud to have led the opposition to the Qatari whitewash – especially our full-page ads in The New York Times – and for one reason: because Qatar funds the murder of Israelis and we are dedicated to fighting Israel’s enemies as we have in countless full-page New York Times ads on prior campaigns as millions are aware. I will never forget the families of Israelis murdered by Hamas, who is funded by Qatar, and whom my family and I visited on many occasions in Israel. I will always stand by these families against their murderers in Hamas and their funders in Doha, no matter how much I am attacked and vilified for it.”