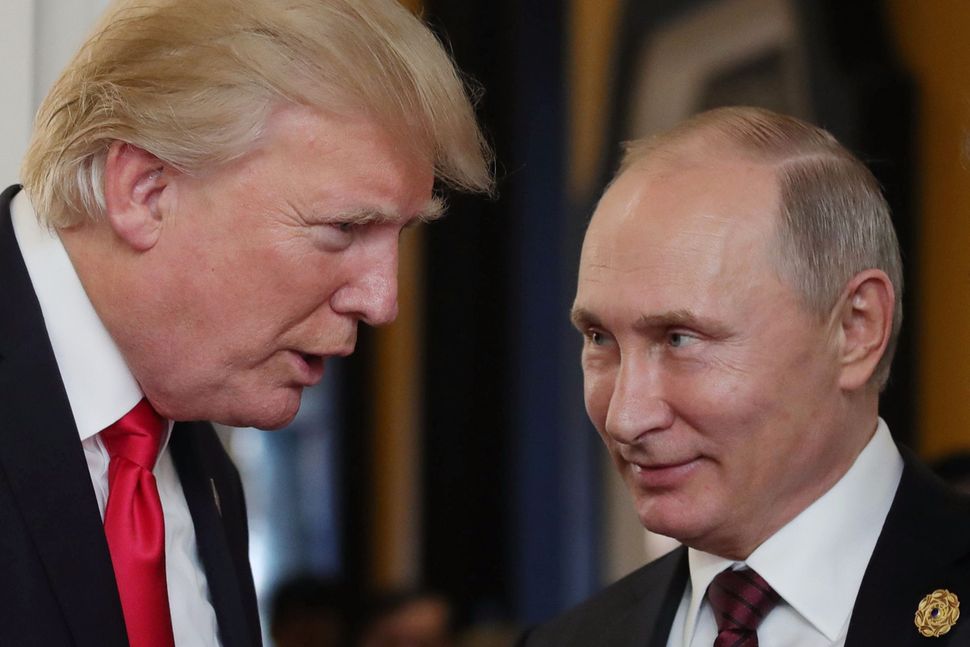 Donald Trump and Vladimir Putin speaking at the APEC Summit in Vietnam in November 2017. Image by Getty

The frightening flare-up involving Syria and Iran this past weekend was not just some far away event that concerns only those of us worried about Israel’s security on its volatile northern border. It may also illustrate the real-life consequences of the Trump administration’s steadfast — and possibly illegal — unwillingness to confront Russian influence and ambition.

It’s a long way from Damascus to wherever Robert Mueller is working in Washington, but it doesn’t take too much imagination to see the possible connection.

President Trump is not the first American leader skittish about involvement in the humanitarian and geopolitical disaster created by Syria’s ongoing civil war — Barack Obama unfortunately paved the way for American inaction. But now the consequences are seeping further south to Israel, and the administration’s decision to go AWOL is all the more consequential.

To briefly recap: On Saturday, the Israeli Air Force shot down an Iranian drone flying in Israeli airspace. The IAF retaliated by bombing Iran’s drone base deep inside Syria. Then the Syrians shot down an IAF plane, the first time that’s happened in decades. And in return, the IAF wiped out a huge chunk of Syria’s anti-aircraft capabilities.

Behind this video-game-worthy action, the players are lining up. It’s Syria, Iran and its proxy Hezbollah on one side, with Russia pulling the strings — all against Israel, virtually alone, because the U.S. is missing in action.

As analyst Yossi Alpher wrote yesterday in the Forward, Washington “is barely a bench-player in what will almost certainly be the next Middle East war.”

Alpher and others have noted that so far, Israeli Prime Minister Benjamin Netanyahu has behaved with admirable restraint as civil war has raged on his northern border, and Israel remains by far the mightiest military and strategic player in the region. “We have never been stronger, more secure and able to chart our national course,” Chuck Freilich, a former Israeli deputy national security adviser now at Harvard, said at a program I attended a couple of weeks ago at the Council on Foreign Relations.

Still, Freilich pointed to the emerging threat to the north, and after the weekend’s event, the risk of further deterioration is growing. Netanyahu has tried on numerous occasions to persuade Russia to reign in Syria, Iran and Hezbollah. And it appears he has received little to no help from the Americans.

And yet, the U.S. could have played a profound role in preventing Russia from exerting more influence in the Syrian meltdown, Ronen Bergman, author of [“Rise and Kill First,”(https://www.penguinrandomhouse.com/books/209254/rise-and-kill-first-by-ronen-bergman/9781400069712/) told me in an interview today. “The U.S. should have made it clear that any agreement in Syria include the evacuation of non-Syrian forces. And it does not.”

Trump’s unwillingness to confront Russia on this and so many other significant issues is long-standing, and from the perspective of someone who ostensibly wants to protect American interests, makes little sense. Unless, perhaps, there is another reason the formerly bankrupt businessman in the White House wants to remain inexplicably friendly with the authoritarian in the Kremlin he so obviously admires.

‘A Revolution of Women.’ The news from Syria does not reflect only death, destruction and despair. I read a remarkable story in Defense One last week by Gayle Tzemach Lemmon, a CFR fellow, describing the radical experiment in women’s rights now underway in northern Syria. After leading the fight against ISIS, these Syrian Kurdish women are now in the forefront of democratic reforms and dramatic social change.

“In this sliver of the Middle East a tectonic shift of politics and governance is underway in which women’s equality now sits at the center of everything that comes next for the region,” Lemmon writes.

Yet another reminder of how necessary it is to challenge our stereotypes and imagine positive change in one of the most unlikely places to find it.

The glorious, Notorious RBG. Speaking of powerful women, the buzz from my February 1 interview with Supreme Court Justice Ruth Bader Ginsburg continues, in the most gratifying of ways. I’ve heard from readers all over the country who attended the event in Washington, tuned in live or watched online — and you still can! — demonstrating the breadth and depth of Ginsburg’s unlikely celebrity.

I tried to unpack the reasons for this fame in an essay published Sunday. Since our interview was chock-full of delightful and important quotes, I collected the noteworthy ones here. But really, poppyseed?

Looking forward. In honor of Presidents Day, the Forward offices are closed next Monday, February 19, and Jane Looking Forward will take the day off, too. Meantime, feel free to send your comments and concerns to JaneEisnerEIC@forward.com.