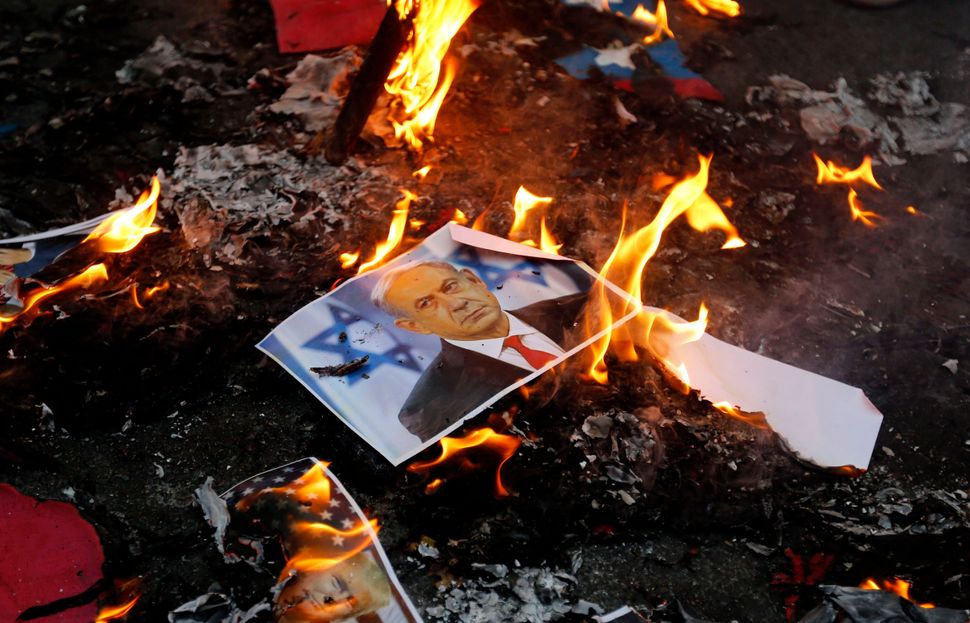 The clash between Israel and Iran on February 10, following the incursion into Israel’s airspace of an advanced Iranian UAV operated by Iran from Syria, was a new and very worrying development. It signaled the first time that Iran challenged Israel directly and militarily, and from Syrian territory.

As far as Israel is concerned, this particular episode has ended. Israel retaliated and its strikes caused major damage to Syrian and Iranian military capabilities; according to Israeli media, nearly half of Assad’s air defenses were destroyed — a good result, despite the loss of the F-16 aircraft.

Israel will continue its efforts to coordinate its military responses to dangerous developments in Syria and Lebanon, and will do what it needs to do to secure its borders. But Iran has created a potentially explosive situation, which could ultimately drag the region into a terrible war. Iran’s new and provocative assertiveness, while clearly directed first and foremost to Israel, had an additional message that went beyond the bilateral context, namely, that Iran was calling the shots in Syria.

As such there are implications for the external powers as well. There is a need for new efforts on their part to coordinate the delicate situation that has emerged in Syria and Lebanon, in particular with regard to Iran’s ongoing presence in Syria, and its transfer of missiles and advanced weaponry to Hezbollah, as well as construction of factories in Lebanon and Syria for the manufacture of precision missiles.

While Russia has been in close cooperation with Iran in their joint military campaign over the past few years to prop up the Assad regime, Russia has reason to be quite concerned by Iran’s bid for independence in facing Israel. Russia is playing a very complicated game of coordination in Syria, and in the Middle East more generally, and Iran’s direct military challenge of Israel threatens the delicate balance, and no doubt created a headache for Putin. It was a short-lived headache this time, but indication of what could develop down the line.

In addition, once there is some resolution to the seven-year butchery in the civil war in Syria, the common interest that has kept Russia and Iran on the same side since late 2015 will largely disappear. Both Russia and Iran have long-term plans to expanded regional influence in the Middle East, and that creates a zero-sum situation.

Russia is not likely to tolerate Iran’s ongoing bid for power at its expense. This creates room for US and EU discussions with Russia about the need to curb Iran’s presence and activities in Syria before it’s too late.

And let’s not forget that it was the US under Obama and the EU that created the conditions that enabled Russia’s violent military entry into Syria in the first place. And it was not unrelated to the Iran nuclear deal. The Obama administration was reluctant to take action to uphold its redline after Assad used chemical weapons back in 2013. This reluctance stemmed from a threat from the Iranians, that US intervention which undermined Assad’s rule could cause the supreme leader to discontinue the nuclear talks. Obama’s reluctance to intervene in Syria continued into his second term. And once the Joint Comprehensive Plan of Action, the Iran Deal’s official name, was presented in July 2015, both the US and European states were happy to ‘check the box’ on Iran as it were, basically opening the door for Iran to cooperate militarily with Russia.

It was no accident that just 10 days after the deal was announced, the commander of the IRGC Quds force, Qasem Soleimani, traveled to Moscow to close the deal with the Russians regarding their joint military campaign in Syria.

Back in 2015, Obama tended to pepper his statements about the JCPOA with hopes and even expectations of moderation in Iran, like election of Rohani, as well as improved relations with the US and even with its regional neighbors. While being careful to always have on hand other statements clarifying that such moderation is not a sure thing, clearly the Obama administration was boosting expectations of change in the behavior of the Iranian regime, in the direction of enhanced cooperation.

But what we have seen over the past two and a half years is anything but moderation, neither within Iran, nor in its foreign policies and rhetoric. The deal ironically left Iran feeling emboldened to pursue its aggressive regional policies due to the new level of support it had not only from Russia, but from the EU as well.

While the Obama administration was not happy with some of Iran’s policies, including missile tests, naval provocations against US ships and sailors in the Gulf, and imprisonment of US-Iranian citizens on bogus charges, it allowed itself to be deterred by Iran’s threat that any pushback risked Iran’s departure from the nuclear deal.

So where does the US now stand? The Trump administration has already indicated its desire and intent to take a much tougher stance against Iran on a number of fronts, including the nuclear deal. At the rhetorical level, the message from the US regarding the latest episode was strong: it expressed unequivocal support of Israel’s right to defend itself, and Defense Secretary Jim Mattis stressed that Iran is the most problematic actor in the region; wherever there is trouble in the region, Iran has a role.

The strong rhetorical messages are a positive start, but more will be needed to contain the situation over the long term. It is crucial that the US remains a key player in this region.

The US must endeavor to engage the Russians in conversations about not agreeing to a permanent Iranian presence in Syria. But the Europeans also need to be convinced to reverse course, and to begin reacting firmly to the aggressive policies of the Iranian regime. The Trump administration has initiated discussions with European states regarding efforts to strengthen the nuclear deal, and it should now do what it can to impress upon its European allies that turning a blind eye to Iranian hegemonic moves across the Middle East is not sustainable.

The growing gap between the liberal values that the Europeans claim to hold dear and their willingness to embrace the Iranian regime, at seemingly any cost, is cause for concern. Indeed, Europe increasingly projects that it values its economic interests more than its expressed commitment to nuclear nonproliferation or human rights, as pertains to Iranians that are desperate to break free from the regime’s repressive yoke. EU foreign policy chief Federica Mogherini tends to pull out the liberal values card only when it comes to her frequent urge to lecture and scold Israel.

But for the EU to continue to appease Iran’s ongoing aggression and violence, internally and via its regional hegemonic agenda, risks great danger. The EU must pause and seriously reassess its policy toward Iran. And as much as European officials might dislike the Trump administration, they have to find a way to work together in this regard.

Until recently, the Europeans refused to entertain any notion of strengthening the Iran nuclear deal. However, following Trump’s threats to exit the JCPOA, France’s president Macron last summer openly admitted for the first time that there were problems associated with the deal, and that he would be willing to discuss Iran’s missile program, the sunset provisions in the nuclear deal, and Iran’s dangerous regional activities.

Taking a cue from this development, probably the most productive way forward on the European front is to pursue coordination with individual European states, rather than with EU institutions. The statement released by the British foreign ministry two days after the UAV episode provides further support for this conclusion. Foreign Secretary Boris Johnson echoed US statements to the effect that the UK supports Israel’s right to defend itself against any incursions into its territory and is concerned at the Iranian actions which detract from peace efforts. In his statement, Johnson also noted that Britain encourages Russia “to use its influence to press the regime and its backers to avoid provocative actions and to support de-escalation in pursuit of a broader political settlement.”

Containing the Iranian threat in Syria and Lebanon will require new coordinated efforts among the key external parties. Hopefully the latest UAV episode will impress upon them that there’s no time like the present to begin.

Emily Landau is a senior research fellow at INSS and head of the Arms Control and Regional Security Program.