Why John Podhoretz Gets The Gun Reform Argument Totally Wrong 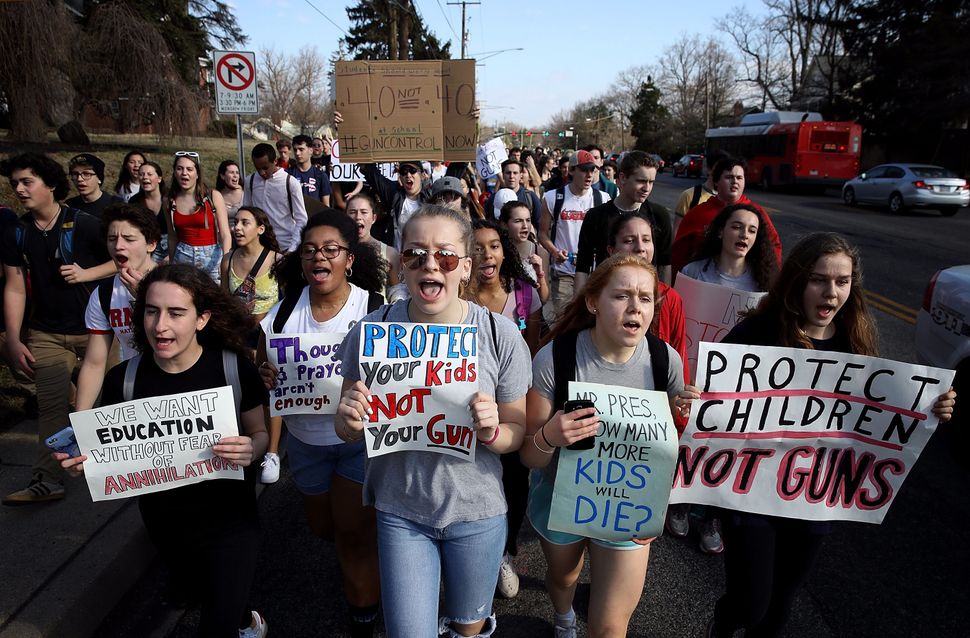 Ever since we had a particularly unpleasant exchange at the 92Y some years ago, I have tried to stay clear of John Podhoretz, editor of Commentary magazine and columnist for the New York Post. But occasionally he writes something that raises a provocative question worth tackling, and his column last Friday did just that.

Are gun control activists too self-righteous and morally smug for their own good?

Yes, Podhoretz argued. And that sense of moral superiority is damaging efforts to reach the minority of Americans who own guns and the majority of federal lawmakers in their thrall. “(I)f you genuinely want to alter the trajectory of America’s gun culture, stop thinking of yourself as a moral paragon and the people whose rights you are seeking to curtail as potential mass murderers and start thinking of them as fellow citizens you have to convince,” he admonished.

Now I am not an activist; I am a journalist. Under my leadership, the Forward has published commentary from all sides of this red hot debate. But I admit to having deep emotions about the dangerous proliferation of guns in this country, because I know personally the lasting damage they cause. My husband is named for his father’s youngest sister, shot to death by a playmate when she was only ten years old, and in researching a story about this tragedy for the Forward in 2015, I learned how the ramifications of the murder still haunt the families of both the victim and the boy who pulled the trigger many decades later.

But no, I don’t feel morally superior to the family of the person who scarred my family so.

Can I tell the difference between a Glock G19 and an AR-15? Nope. Do I know what it’s like to live in rural America, where hunting is a popular pastime and the nearest police station is many miles away, and it may be necessary to keep guns for personal protection? Nope. Do I know many people who even own guns, never mind proudly carry them in purses and pockets? Nope.

But those folks don’t know my life, either. They don’t know what it’s like to live in the largest city in the country where it is tougher than most places to buy a gun — and where the crime rate is the lowest of any major city in the United States. (Though Podhoretz should. He lives here.)

They clearly don’t know what it’s like to look at this country from overseas, and realize that Americans own way more guns than any other country in the world, that we lead the world in mass shootings, than homicide rates are 25% higher here than in other high-income countries, and that the homicide rate — directly attributable to the proliferation of guns — makes crime here more lethal than in other countries.

They aren’t listening when gun control activists repeatedly affirm that they don’t want to eliminate recreational activities like hunting; don’t want to prevent responsible gun ownership for personal protection; don’t want to ban all weapons except for toy squirt guns — that they just want reasonable curtailment of deadly weapons and ammunition, so that children aren’t shot in the classroom and suicides can be prevented and domestic abuse is not so lethal.

And guess what? There are many more of us than there are of them.

Podhoretz contends that 35% percent of Americans live in households that have a gun. That number may be high, but never mind. What he doesn’t say is that while many people live with guns, they don’t personally own them. Gun ownership is concentrated among mostly (white) men in certain states, and lo and behold, the states with more gun owners are the states with more gun deaths.

This minority of Americans, aided by a ruthless lobby shilling for gun manufacturers, has manipulated the governing system in Washington and state capitols so expertly that it has suppressed the expressed will of the majority. And yet its leader has the chutzpah to say that gun control advocates like the student survivors in Parkland want to “eliminate all individual freedoms”?

For decades now, those who have resisted even reasonable gun control have skillfully exaggerated the threat to their individual rights. No one is abolishing the Second Amendment any time soon — even if the conservative columnist Bret Stephens made a good argument to do so. No one is suggesting wide scale confiscation of legally owned weapons.

Podhoretz employs the same trick in his column. C’mon.

“And if they want guns just to want guns, they believe that is no different from wanting a Louboutin or a Birkin bag,” he writes. (I have no idea what he is referring to.) “They’re not demanding you stop wearing your fancy shoes, why should you control what it is they wish to purchase?”

Because guns are made to kill.

Can it be any plainer?

Parkland. Mass shootings are now known by a single place — Columbine, Sandy Hook, Las Vegas — and this Florida town, with its substantial Jewish population, proved an important story for the Forward. (For why Jewish news organizations cover these stories the way we do, I recommend reading this lucid explanation from my friend Andrew Silow-Carroll, editor-in-chief of JTA.)

At the Forward, our most read piece so far has been Jay Michaelson’s scathing analysis of the National Rifle Association’s anti-Semitism problem.

But passion and anger are not the only emotions at play in this unfolding tragedy. I particularly appreciated this story from freelancer Ilene Prusher about how Shabbat was celebrated days after the shooting. And our Ari Feldman yesterday told of how rabbis must cope with the pain and horror of mass murder.

Looking forward. And what’s in your Purim basket? This is the time of year when I confess to failing at Purim madness. I am not very clever at making a costume and never organized enough to buy one. I was never able to pull together scores of mishloach manot baskets and deliver them to friends and neighbors. As I wrote about last year, I stink at making hamantaschen.

But come Wednesday evening, I’ll listen to the Book of Esther (costumed or not,) laugh at the Purim shpiel (funny or not,) twirl my ancient grogger, and be grateful for a day when hilarity rules and freedom is celebrated.

Why John Podhoretz Gets The Gun Reform Argument Totally Wrong