I Called Out Orthodox Racists. It’s Time For The Women’s March To Call Out Theirs. 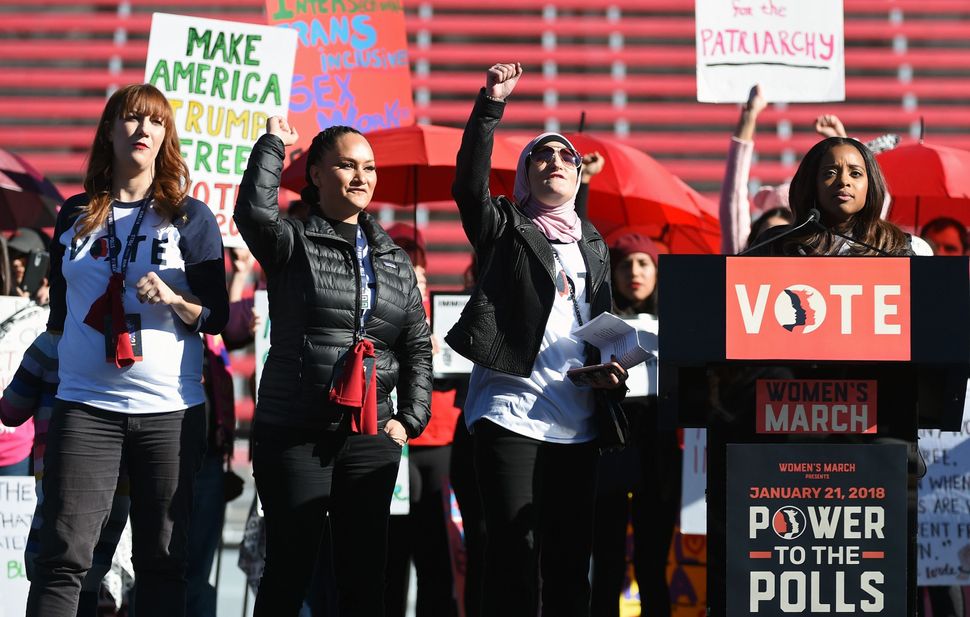 The first time I heard the N-word spoken aloud, I was an adult in an Orthodox yeshiva. I was shocked. Before I enrolled in yeshiva as an adult, I had never heard the word except when reminded not to say it or in a movie. I had grown up my whole life in liberal Jewish suburbia, followed by college where I spent all my entire time with liberal friends.

That the first time I heard this awful slur was in a Jewish setting, in a place I had come to to learn the secrets of God, was all the more shocking.

I was quickly to learn that this was no one time thing. Routinely in the years that followed, I’d visit Hasidic homes where people would laugh about “schvartzes,” the yiddish word for “black” which is often also used in essentially the same way as the N word., as if it was nothing.

Later, I would commiserate with more liberal Orthodox friends. But we were quiet when it counted. We loved our community, and we were afraid that speaking up would hurt our communal bonds with the people we cared for so deeply.

I started writing, and still I didn’t speak out, not against the racism in my Orthodox community. After a rabbi in my community said that the only way to fight the Palestinians was to “destroy their holy sites. Kill men, women and children (and cattle)”, I called my rabbi. Shouldn’t I write something? I asked. His answer was clear: “Don’t. He is such an important voice. And respected in the community.”

I was a coward, and I listened to the rabbi’s advice, quiet in the face of a powerful leader in my community. I let tribalism trump my values.

But when our frum world embraced Trump and his vile rhetoric, I found I could no longer be silent.

As I wrote here a few weeks ago, white nationalism is spreading in the Orthodox community. Many of my fellow orthodox Jews attacked me for writing this piece. On social media, I was called words like “traitor,” “mentally ill,” “communist,” and “liar.”

Tribalism can only beautiful if the tribe’s members are committed to something more than their own survival, especially when that survival comes at the cost of others. And so, I believe, as I see my family, my lovely, beautiful, flawed, family heading towards a moral cliff, that I must speak up.

It is for this reason that I was dismayed and heartbroken by Tamika Mallory’s recent article in response to the blowback she’s gotten for proudly and joyfully going to an antisemitic Farrakhan speech.

Mallory’s piece is a case study in blind tribalism. She describes going to these rallies since she was a child. She explains that after her son’s father was murdered, “it was the women of the Nation of Islam who supported me and I have always held them close to my heart for that reason.”

She goes on to say that, “Where my people are is where I must also be. I go into difficult spaces.”

In other words, Mallory believes that the Nation of Islam is her tribe, and so she cannot abandon them by denouncing their most prominent leader’s vile rhetoric, even if that rhetoric, theoretically, is in conflict with her values.

Mallory paints this decision as a brave one She asserts that she is merely standing up to the vast swaths of people who dare to speak up against a civil rights “freedom fighter” for caring so much about her own people.

She is wrong. This is tribalism without values, and I know this because I see it in my world every day. And because I myself lived out the same narrative.

Today, I see Orthodox Jews who think that “good for the Jews” is a blank check excuse for hate, including empowering a white supremacist president who has no trouble seeing the “fine people” in a group of Nazis.

Mallory is a leader of a national movement that, beautifully, is meant to be a voice for women the world over.

What good does it do for the people she is supposedly standing up for to ignore the anti-Semitism, homophobia, and sexism of Farrakhan? What good does it do for, the people of the Nation of Islam? Mallory’s refusal to renounce Farrakhan (or at the very least, his vile rhetoric about Jews, gays, and transgender people) doesn’t strengthen them; it weakens them. She has an incredible platform and voice, one that could have a massive impact on the people she loves and cares for. If her values actually aligned with the Women’s March, then she would denounce the hate unequivocally. She would stand up to Farrakhan out of love and out of a commitment to her values.

But she has not done so. And in the process, she has dragged people who have fought valiantly alongside her down with her. Some Jewish activists are standing up for Mallory while denouncing Farrakhan’s rhetoric. But if they cannot publicly denounce her for her cowardice in dealing with her own community, while still being in dialogue with her, then that is not true dialogue — and that is not true community.

I have written so much in the last two years denouncing the choices of my fellow Orthodox Jews, and I often am afraid that I will lose all of my former friends because of it.

But I haven’t. Instead, I walk into my old synagogue, where I know the vast majority of worshippers support Trump, and I still feel so much love from them that I want to cry. They are good people, and I love them, and that’s why I fight them.

To be sure, I have lost speaking gigs, job opportunities, friendships, mentorships, colleagues and more due to speaking up. But those people who still embrace me remind me that no disagreement can actually break the true bonds of our tribe: our commitment to bringing God’s beautiful, loving presence into the visual spectrum of life and society.

I understand that the dynamics of the experience of being a black woman in her position are not the same as mine. I do not get daily death threats as she does. I do not face the level of fear she does. But if Mallory is truly a leader, the one that deserves a national stage, fear cannot be an operating principle.

For it is to her community, the Nation of Islam, that Mallory does the most harm by refusing to call out its shortcomings. They deserve better.

I Called Out Orthodox Racists. It’s Time For The Women’s March To Call Out Theirs.