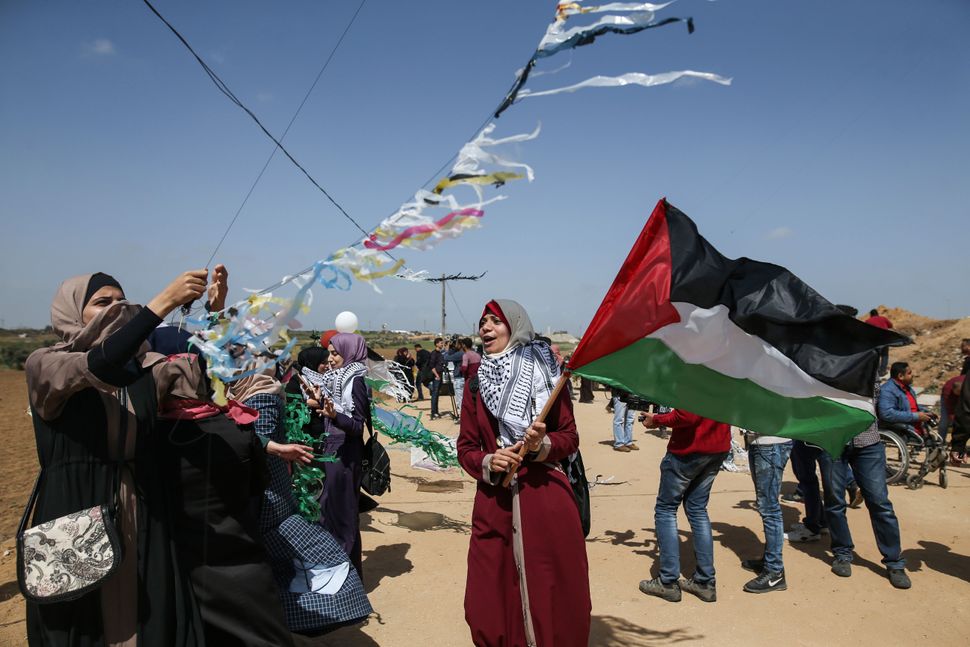 Like the rest of the inhabitants of the world, Palestinians are a people who love life, community and family. We seek only a better future for our children.

Having considered our various options as well as our lawful right to resist, Palestinians in Gaza have decided to launch peaceful marches near the segregation barricades that deny us any meaningful scrap of self-determination. This campaign will demand an end to the occupation, an end to the siege of Gaza and a recognition of the right of Palestinians to return to their homes in accordance with UN resolution 194, issued in December 1948.

These events will take place on March 30 and they will coincide with the anniversary of “Land Day”, in which six Palestinians were killed in 1976 while defending their land as it was seized by Israeli authorities in the Galilee area.

In the tradition of passive resistance our activities will be peaceful and continue on the borders until May 15, the 70th anniversary of the Palestinian “Nakba”, when upwards of a million Palestinians were expelled from their homes.

We hope that all Palestinians in our homeland and diaspora, including men, women and children, will participate in these marches and related demonstrations that share a common theme of justice, opportunity and freedom. Our activity will be overseen by a national committee, which represents all Palestinian forces and factions as well as civil society and independent Palestinian figures and supporters.

This committee has circulated numerous publications and directives for participants in the marches, which emphasize the peacefulness of this particular movement and the need to avoid violence or any provocative escalation by Israel. The committee has also designated various on-site representatives to oversee our collective efforts and to ensure that our message is heard, powerfully and peacefully.

Notwithstanding our best efforts, we fully expect provocation by Israel during our protests. We will do all that we can to ensure its efforts will pass without any response.

Given a long and well-documented history of violence in furtherance of the occupation, Palestinians have a well-founded fear that despite the peaceful nature of our marches, Israel will use them as a pretext to kill and injure more of our people.

Nevertheless, we will not be deterred as we exercise our fundamental rights to resist and to demonstrate so as to ensure that the path for our children will lead to a better, just and equal future.

For we were forced from our homes in 1948, as dozens of respected historians and journalists have documented. The hurried desperate mass flight of Palestinians from the paramilitary assault upon our age-old communities is beyond honest debate or dispute.

And yet, instead of assisting us to reclaim our rights and our national aspirations, Western nations have openly embraced policies that not only favor and protect Israel but empower it to continue a now decades old illegal occupation of the Palestinian territories.

No nation has been more supportive of this historical injustice than the United States. Not satisfied with more than $250 billion in direct government aid to Israel, the U.S. has used its veto more than 70 times in the Security Council to prevent passage of resolutions condemning Israeli policies.

Among its unprecedented financial support for Israel, the U.S. has provided many tens of billions of dollars in military aid and equipment that has subsidized Israeli control over the legitimate rights and aspirations of millions of Palestinians and inflicted widespread death and destruction among our communities.

Recently, in an effort to further punish Palestinian civilians, the U.S. administration cut more than $360 million in aid out of what was its $1.2 billion annual share to the U.N. Relief and Works Agency (UNRWA). This international aid effort provides health, education and food benefits to some 5 million Palestinian refugees’ worldwide that represent about 60% of the total population of 8.5 million Palestinians inside and out of Palestine.

And what of the daily life of Palestinians under occupation, whether in the West Bank that is divided into cantons or the besieged Gaza Strip? Both have been turned into an unbearable hell. Murder, imprisonment, siege, land seizure, house demolitions, poverty, unemployment, and denial of medical treatment and travel have become the daily way of life for millions of Palestinians.

It is against these baleful conditions that we march tomorrow in peaceful, nonviolent protest – for our rights.

Basem Naim is the former health minister of the Gaza Strip.