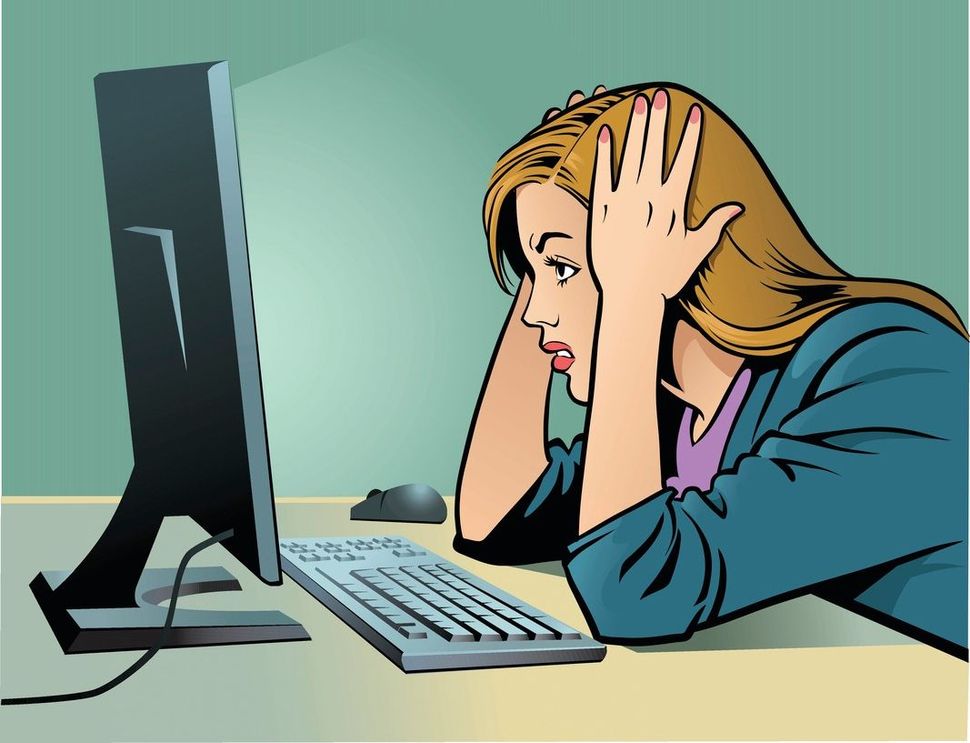 The Washington Post published a personal essay by a woman who had two relationships with Jewish men fail and now no longer wants to date Jewish men, and a lot of people are very mad. The essay is rife with seemingly accidental anti-semitism, including a cocktail the writer is “determined” to create, named “A Jewish Man’s Rebellion,” which will be garnished with bacon. Oy vey, bubbeleh.

I was also mad about this shonda of an essay, and hurt by it, as the product of a half-Jewish union or “interfaith relationship,” as the writer repeatedly describes such marriages, in a way that makes them feel like some sort of aberrant mutation of acceptable behavior, as opposed to a very normal thing that produced the majority of my friends and associates. I joked with friends online about it, snarking at the way the writer described herself:

“At first glance, I fulfill the stereotypes of a white, Anglo-Saxon Protestant (WASP). I’m blond, often wear pearls and can mix an excellent, and very strong, martini. Manners and etiquette are important to me, and when I’m stressed, I often cope by cleaning.”

Not like us Jewish girls, who are rude and dirty, basically feral wolves. Pearls get knotted in our unruly, frizzy, dark hair, and fade to invisibility against our pallid complexions. We drink weak Manischewitz — that is, when we’re not guzzling the blood of Christian newborns.

But I’m less mad about this woman’s apparently heartbreak-induced anti-Semitism than I am that the essay was published by an editor who I can only assume was looking for hate clicks. The writer is a freelancer; I am, too. The life of a freelancer is basically endlessly pitching ideas in the hopes that one will be accepted and you will be a couple hundred dollars closer to making your rent that month. To borrow an analogy from baseball, a sport I only vaguely understand, it’s like swinging at every pitch, no matter how bad it is, in the hopes that one will make it over the fence.

Sometimes those pitches are bad! We rely on editors to tell us, hopefully gently, “I don’t think this quite hit the mark.” Especially when we write personal essays, we really need editors who will prevent us from embarrassing ourselves. Every time I have pitched anything personal, it has been sent with a vaguely panicked message along the lines of, “Can you read with a careful eye as to whether I am being a bigot or a monster or an idiot? Thank you!!!”

This woman had two failed relationships with Jewish men who happened to end up with Jewish women after dating her. For a while, every guy I dated married the woman he dated after me and I declared to all my friends, every shopkeeper I encountered, and pretty much any human who made the error of sitting near me that I was cursed.  “All my exes marry the woman they date after me!!!”  This highly unscientific conclusion was based on approximately three men. I am still grateful that I was not writing personal essays at this stage in my life.

Heartbreak, especially when paired with feeling jilted, makes a person feel crazy, in my experience. It is much less upsetting to tell oneself, “These relationships did not work out because of something that has absolutely zero to do with my personality or behavior.” Truthfully, a lot of relationships don’t work out because of things that don’t really have to do with your behavior or personality. Compatibility is a weird sort of witchcraft, some sort of strange ephemeral thing that somehow makes you less annoyed by one person’s annoying traits than you are by most other humans’.

Who among us hasn’t had a relationship end and made some grand declarations, come to some very simplistic conclusions about HOW I WILL DATE GOING FORWARD based on an experience with one complex individual? Here are some of mine:

I will never date a youngest sibling

I have broken all of these vows, multiple times over. They were almost all completely stupid, except for the last one, which I think might be impossible to keep because generally by the time someone is making you feel bad about yourself, you really, really love them and love is like heartbreak in that it makes us kind of blind and dumb, so you can’t really tell what’s happening until you look back in the rearview mirror a year or so later and think, “Wait, why was it so hard for that person to be kind to me when I was feeling low?” (Also, lots of men are competitive about sports and games, but I still maintain that you should seek the nearest exit if your boyfriend throws a literal child’s tantrum, full-on body on the ground-style, if he loses a game of kickball. Just some friendly advice from me, a woman who has been mistakenly over-indulgent of such behavior, to you.)

My point is, I don’t actually think the writer of the Washington Post essay is anti-Semitic. I think she is hurt and casting about for an explanation that will include some sort of lesson that will prevent her from ever being hurt again, and I understand that response to having an aching heart. Landing on the lesson “Jewish boys date non-Jewish girls as a rebellion and then marry Jewish girls” might be a comfort, but it’s undermined by a lot of the data that is awkwardly shoehorned into her essay. Jews are more likely to intermarry, according to a book; 44 percent of American Jews had a non-Jewish spouse as of 2013, according to the Pew Research Center. All this points to that age-old adage: He just wasn’t that into you.

The writer even acknowledges that her non-Jewishness was not the reason for either breakup, and says there were “tense moments” in her relationships with these men, including when she got a phone call from one boyfriend’s mother and was upset that the mother had her phone number. Classic overbearing Jewish mom, she unsubtly implies (she literally describes the boy’s mother as overbearing). But in the same paragraph, she’s upset at not being invited to the boyfriend’s family events. You can’t have your WASPy distance and share the afikomen, too, my love.

Is the essay anti-Semitic? Yes. Is the writer? I don’t know. Is the editor? Also unclear — but the editor did choose to publish the piece. While the internet drags the freelance writer, per our 21st century customs, there was at least one editor, if not more, who approved this piece, who published it, who put it out into the world. Why? A yen for hate clicks? An inability to see all the logical flaws and anti-Semitism in it and respond to the writer with some constructive feedback? You’re making a judgment about an entire group of people based on two relationships that you say failed because of reasons unrelated to your faith. This is going to be read by a lot of people as anti-Semitic and reductive and also just not very smart.

Danielle Tcholakian is a writer in New York City.