Are Ultra-Orthodox Yeshivas Bad For Democracy? 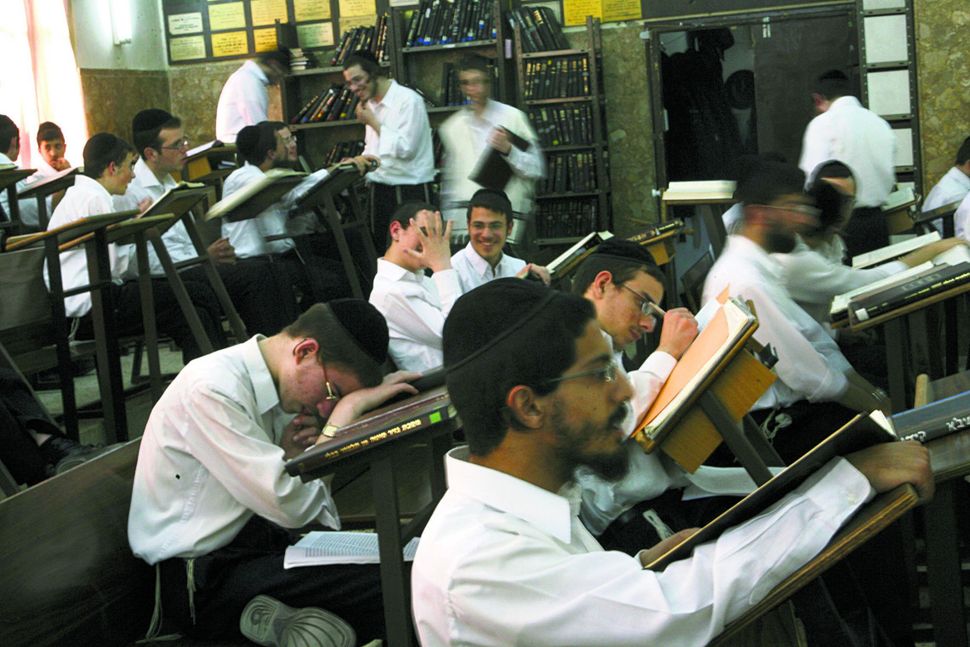 When I worked at the National Constitution Center in Philadelphia a decade ago, I delighted in giving tours around the permanent exhibition, especially the part that highlighted the different things a U.S. citizen can, and in some cases should, do. Serve on a jury. Serve in the military. Vote. Run for office. It was an interactive experience, because citizens do: They decide legal cases affecting the lives of millions of people, or take an oath of office to uphold the Constitution on everyone’s behalf.

As my colleague Josh Nathan-Kazis reported, the $168 billion budget for the state of New York was held up last week by one lawmaker, Simcha Felder, as he tried to insert a provision that would weaken the government’s ability to regulate education in Orthodox yeshivas.

“The new provision was custom-written for Orthodox yeshivas, and appears to only apply to them,” Josh wrote. “Felder, a state senator, threatened to derail the entire state budget if the provision was not included. Hasidic leaders have greeted it as a major win for their community, though its practical implications remain far from clear.”

Josh then quoted Aron Wieder, a Rockland County legislator and a member of the Belz Hasidic community, who said on Twitter: “The entire private school community from every religious persuasion, will forever remember [Felder] for protecting their freedoms.”

“Parents should have the ability to decide what sort of education their children receive,” Felder told the New York Times.

This glaring deficit is often placed in an economic context — an explanation for the high poverty rates in ultra-Orthodox communities, due to the inability of men (women often receive a better secular education) to be able to earn a living, fostering an unhealthy reliance on government handouts and private philanthropy.

But the citizenship context is just as essential. After all, as the education lawyer Michael Rebell told me, New York State law says that schools must not only prepare students for competitive employment. They must also prepare their graduates to vote and serve on a jury — to function productively as civic participants.

How can you vote if you aren’t taught about the mechanic and purpose of democracy? How can you make independent judgments about elected officials without a working knowledge of American government? How can you serve on a jury without a basic understanding of math and science?

It’s worth remembering that the idea of education as an incubator for citizenship was long perceived to be a conservative value, a way to enhance patriotism and love of country, a vehicle for creating among new immigrants a sense of the greater American whole. Now it’s those very conservative forces — among the ultra-Orthodox in Brooklyn and some Christian evangelicals in the South — who are rebelling against the imposition of those values.

What I’ve been reading. I’m a subscriber to the Morning Media newsletter published by Politico every day, a helpful compilation of news and gossip about the news business and its personalities. It occurred to me after reading this example last week that some of what is wrong with media today, and politics more generally, can be traced back to a widespread case of really bad manners.

The tone is set from the top, of course, and the Tweeter-in-chief deserves much of the blame for coarsening public discourse with his mean, foul, disrespectful language. But not all the blame. As just one edition of Morning Media shows, the conservative columnist Kevin Williamson was fired from The Atlantic and the Fox TV host Laura Ingraham faced an advertiser boycott not over their views, but the unacceptable way they expressed those opinions.

What made them think it was okay to say such nasty things? Who raised them? I wouldn’t allow that sort of language around the dinner table when my kids were growing up and I bet a lot of people today would not, either.

As a society, we have much work to do to restore civility in our public discourse. You would think that losing a job and losing income would be penalty enough to dissuade people from continuing this behavior. But no. Fox News chief Ruport Murdoch is defending Ingraham, and John Podhoretz at Commentary just hired Williamson. The culprits are bad enough. Their enablers are worse.

Writing on deadline. My initial draft of Jane Looking Forward last week began by praising the Israeli government’s decision to allow some of African refugees to stay in the country, and to arrange to deport others to friendly European nations. Then, just on deadline, I learned that Prime Minister Benjamin Netanyahu reneged on the agreement he had announced only hours before.

I quickly rewrote the newsletter, but some readers still received the initial one by mistake. The perils of writing as news unfolds! If you are curious about my later opinion, here it is.

Looking forward. Thank you to those who have written to JaneEisnerEIC@forward.com in the last few weeks. I apologize for my delay in acknowledging your emails. Passover was joyous this year, but left me little time to keep up with my correspondence. I hope to rectify that this week.

Are Ultra-Orthodox Yeshivas Bad For Democracy?