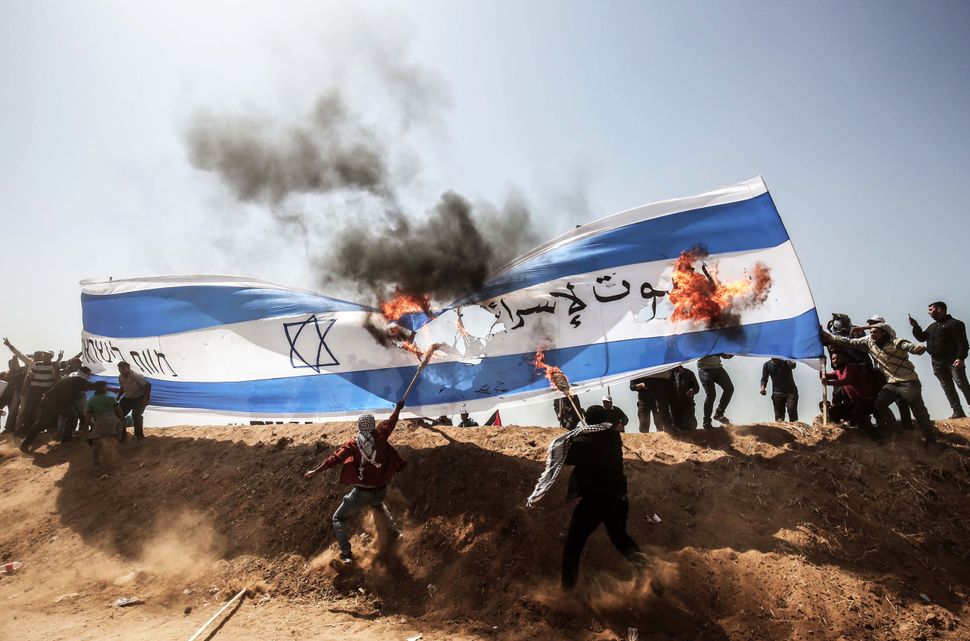 Just an easy hour’s drive south along the Mediterranean coast from where I live, Gaza’s Hamas leader Yahya Sinwar encouraged a crowd of protesters gathering last Friday for the supposedly peaceful “Great March of Return” near the border with Israel: “We will uproot the borders, we will pluck out their hearts, and we will pray in Jerusalem.”

This bloodthirsty threat didn’t make headlines, though you can find it in various news reports, usually buried deep in the balancing act that putatively unbiased journalism requires.

But in a way, Sinwar’s threat wasn’t really news. Already last fall, the Hamas leader made it very clear that he isn’t interested in any kind of accommodation because the question that’s keeping him busy is “when to wipe out Israel.” It seems nobody consulted Sinwar for all the glowing reports that appeared a year ago, when the Islamist terror group was hailed in the media for “putting forth a more moderate face,” and even for “accepting a Palestine based on 1967 borders.”

Just as we could read last year about all sorts of hopeful signs that Hamas was becoming “moderate,” we can now read a lot about how the terrorist group is embracing “non-violent” protests.

But it is a contradiction in terms if you claim to protest “non-violently” for a goal that can only be achieved with violence. For the goal of this march is apparent in its name — “Great March of Return” — where Palestinians in Gaza are giving their game away. They are marching for the “return” of millions of descendants of Palestinians who fled Israel 70 years ago. Their aim is explicitly to transform the world’s only Jewish state into yet another Arab-Muslim majority state.

And whether it’s the media or human rights organizations or the United Nations, everybody seems eager to pretend that storming Israel’s borders qualifies as a “peaceful” protest for legitimate Palestinian rights.

The bitter conclusion for many Israelis like me, who ardently supported Peace Now in the 1990s and cheered Israel’s withdrawal from Gaza in 2005, is that the right wing was right. Us in the give-peace-a-chance crowd hoped that the Palestinians would use the Gaza Strip to showcase how a Palestinian state would look. Ten years later, what can we say when the right now points to the impoverished territory ruined by terrorist misrule and grimly notes, “We told you so”? And whatever happened to the idea that once Israel withdrew from occupied territory, it would have international support when it defended its legitimate borders?

The “Great March of Return” has one loud and clear message, and the media and human rights organizations are doing a swell job amplifying this message: It doesn’t matter if Israel withdraws from occupied territory; the Palestinians who live in this territory under Palestinian rule will still blame everything that’s wrong with their lives on Israel. And they will not only use their territory to launch rockets and terror attacks against Israel, but they will also reserve the “right” to storm Israel’s borders.

I’m lucky to live an hour’s drive away from Gaza. But I know how I would feel if I lived just half-an-hour’s walk away from the border, as thousands of Israeli families do.

But according to Yousef Munayyer, executive director of the U.S. Campaign for Palestinian Rights, there’s no reason to worry: speaking to the New York Times, he claimed that Israel is not defending the lives of its citizens, but just a fence, because Palestinian attempts to breach Israel’s border are really just like the attempts of American civil rights marchers to cross the Edmund Pettus Bridge in Selma some 50 years ago.

It’s an insult to the civil rights marchers, because none of their leaders told them to cross the bridge and pluck out the hearts of those across the bridge.

If any of the men listening to Hamas leader Sinwar had managed to cross into Israel, they may well have done what two Palestinian terrorists did when they managed to break into the home of the Fogel family and butcher five family members, including two children and a three-month old baby, in their sleep. Or they might have done what the 19-year-old Palestinian did who managed to scale a fence to murder the 13-year-old Hallel Yaffa Ariel sleeping in her bed. Or they might have caused a bloodbath like the Palestinian terrorist who found an open door at a home where a family was expecting guests to celebrate the birth of a grandson.

Assuming that those who try to breach the border are terrorists doesn’t mean thinking that every Palestinian is a terrorist. And yet, research shows a consistent support for terrorism among Palestinians, like this 2014 Pew study that found that across the Middle East, support for suicide bombing is highest in the Palestinian territories, where 46% of Palestinian Muslims say that it is often or sometimes justified in order to defend Islam. “Support is particularly high among Muslims in Gaza (62%) versus those in the West Bank (36%),” Pew concluded.

If polls seem too abstract, consider the example of one Palestinian you have likely heard of: Nariman Tamimi, the mother of Ahed Tamimi, the teen famous for a video depicting her slapping an IDF soldier. Many of Nariman Tamimi’s Facebook posts honor the perpetrators of terror attacks, including the 19-year old Palestinian who murdered the 13-year-old Hallel Yaffa Ariel. Nariman Tamimi has also long been an outspoken supporter of her relative Ahlam Tamimi, who planned and helped perpetrate the bombing of a crowded Sbarro pizzeria in Jerusalem in August 2001. And as far as Nariman Tamimi is concerned, there is absolutely nothing wrong with asking her daughter for a “message to the world” and then proudly livestreaming her response on Facebook, including a call for stabbings and suicide bombings in solidarity with the Palestinian cause.

Over the past few months, you could have read or watched literally hundreds of reports presenting the Tamimis as admirable non-violent activists fighting against Israel’s occupation of the West Bank. But the Tamimis, including Ahed herself, have often declared that they are not interested in a Palestinian state alongside Israel, and that they support any method to achieve their goal of turning Israel into yet another Arab-Muslim majority state.

As long as the media are willing to bury the bloodthirsty fantasies of Gaza’s Hamas leader in lengthy reports about how violently Israel is suppressing non-violent Palestinian protests, it’s obviously tempting to come up with truly obscene comparisons to hide the fact that Palestinians are not protesting for equal rights. What they are protesting for is the “right” to rid the world of its only Jewish state. There is no other scenario in which this would be considered “peaceful.”

You’ll know that Palestinians have truly embraced non-violence when you see reports about throngs of protesters marching in the streets of Gaza City and Ramallah with signs calling for the peaceful co-existence of a state for the Palestinian people alongside the state of the Jewish people.