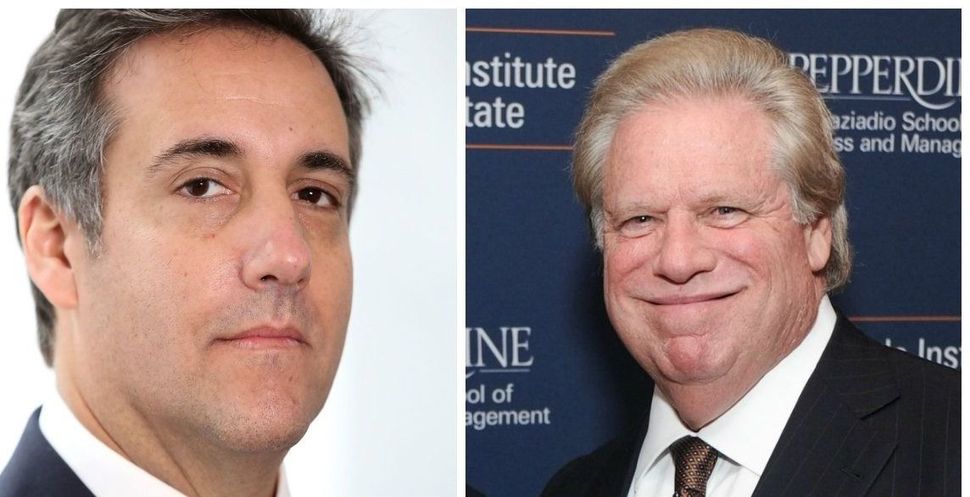 “What the heck is going on at the RNC?” CNN anchor Jake Tapper asked on Friday, in an on air interview with Ronna Romney McDaniel, the chair of the Republican National Committee.

Tapper’s question was prompted by the news that Elliott Broidy had just resigned from his position as the RNC’s deputy finance chair after the Wall Street Journal reported that he had paid $1.6 million to a Playboy Playmate whom he had impregnated. And who negotiated the payment? Why, Michael D. Cohen, President Trump’s personal lawyer, whose home and office were raided last week by the FBI and who may face criminal indictment.

Broidy and Cohen were, until then, deputy finance chairs for the RNC. Broidy hastily resigned as news broke of his expensive dalliance. Cohen’s status with the RNC is uncertain. This came just months after the RNC finance chair, Steve Wynn, also quit after being accused of sexual harassment and assault.

Besides being Republican stalwarts and devotees of President Trump, these men share another trait: All are Jewish. Two of them have been deeply involved with the Republican Jewish Coalition — Broidy as a member of the National Board of Directors and Wynn as a vocal supporter, giving the keynote speech at the RJC’s “California Bash” last November, for instance. (Broidy and his wife were on the host committee.)

Broidy reportedly resigned from the RJC, but as of today, his name was still listed on its website.

This is humiliating, embarrassing and infuriating on many levels. Although American Jews remain largely Democratic, the highest ranks of Republican finance are dominated by Jewish men: Wynn; Sheldon Adelson, the party’s second highest donor in 2016; Bernard Marcus, whom The New York Times calculated was the second biggest GOP political spender so far in 2018.

And when some of these men behave very badly, it reinforces stereotypes and brings shame upon them and those who surround them. Or at least it should.

As Celeste Katz reported for the Forward, Broidy boasted — often inaccurately — of his ties with Jewish museums, synagogues and other institutions. Should they return his donations? Renounce his support? Will they?

Of course, there have been Jewish Democratic leaders recently sullied by scandal — let us not forget Elliot Spitzer and Anthony Weiner — proving that there is nothing necessarily partisan about the tendency of powerful men to abuse their power. (And they all seem to be men.)

That should not dampen our shame, however. When the Jewish community lavishes praise and bestows honors on these men, they ought to understand that their elevated positions come with additional responsibilities. To demonstrate good character. To embody Jewish values. To obey the law and treat others with respect.

“The RNC is questioning the integrity of James Comey?” Tapper asked McDaniel in that interview. “Whatever issues there are with James Comey, what is the deal with Broidy and Cohen and Wynn, and how does that give you any moral ground to question anyone’s integrity?”

That question isn’t just for the RNC. It’s also for these so-called Jewish leaders. How can you stake out any moral ground when you behave this way? Have you no shame?

What else I’ve been writing. The raid on Cohen’s office early last week got me thinking about the way Donald Trump views the Jews who surround him. Then news emerged that uber-lawyer Alan Dershowitz was dining at the White House and offering the president advice.

And then I ran across a brilliant observation from the journalist Franklin Foer, who gave me permission to quote him: “Philo-Semites are anti-Semites who like Jews.” Yep. Describes Trump. Here’s why.

What else I’ve been reading. For two years now, the Forward has hosted a fruitful partnership with Sh’ma Now, which bills itself as “a Journal of Jewish Sensibilities,” edited by my friend and colleague Susan Berrin. In print and online, Sh’ma Now presents diverse opinions on matters critical to contemporary Judaism.

This month’s conversation is on “shalom bayit,” peace in the home — a central Jewish tenet. And yet, at what cost should this peace be maintained? Several writers probe the price that women have paid over the centuries, and wonder when compromise becomes acquiescence, and acquiescence can become abuse. In this #MeToo moment, it is a timely, important conversation.

What’s in a name. When I saw the story that about Stephen Schwarzman, the Wall Street billionaire, and the controversy he has ignited at Abington High School outside of Philadelphia, I experienced a sense of déjà vu. Schwarzman, who is Jewish, offered to write a check for $25 million to help renovate his public school alma mater — with a few strings attached. Like the school be renamed in his honor. And a portrait of him should be displayed prominently in the building.

This has not sat well with many members of this otherwise tame suburban community, in part because they weren’t consulted but also because they resented what felt like a hostile takeover from a Wall Street billionaire who has been immensely philanthropic, but not exactly shy about it.

As one resident quoted by the New York Times said: If the school’s name could be auctioned for $25 million, he added, “what else is for sale?”

No more. Now they bear the names of Jewish donors. And while I fully sympathize with the decisions, I worry about what has been lost and the lessons we are imparting.

I remember one of my young daughters asking at the time: How much did Solomon Schechter give?

Looking forward. Israel’s official Independence Day begins Wednesday evening, and we will use the occasion to begin publishing our coverage of this momentous 70th anniversary. Look for news and feature stories, columns, cultural coverage and more online and in our May print magazine. (And if you don’t already subscribe, you should here!)

And stay tuned for a piece about the Gaza conflict by our senior columnist Peter Beinart later this week. On Thursday, Peter will take your questions on Twitter with the hashtag #AskPeteratForward. Stop by and ask him anything!