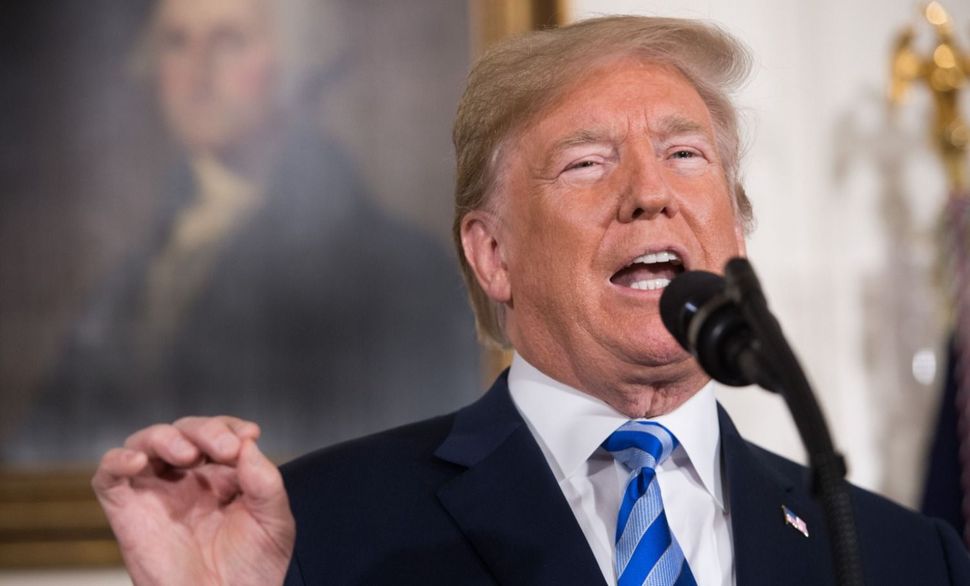 After months of intense, worldwide speculation, Donald Trump finally pulled the trigger on U.S. participation in the Iran nuclear deal with his May 8 statement decertifying the deal and restoring sanctions on Iran. He’d been begged by the top leaders of America’s European allies to compromise, to let the deal’s framework stand and give them time to press Iran for improvements. Instead, he snubbed them and adopted the most extreme, most misleading arguments of the deal’s most extreme opponents for full, immediate withdrawal from the deal.

The results won’t be pretty. Realistically, the Iran nuclear debate has always come down to diplomacy versus action, probably the military kind. In the coming months we’ll probably witness either a new concordat between Iran, Russia, China and the Europeans, with America shoved powerless to the sidelines, or a U.S.-led invasion to topple the regime, as we did in Iraq 15 years ago.

It was the Iraq invasion, in fact, that directly caused the current crisis by removing Iran’s main enemy, Saddam Hussein, and replacing him with a government democratically led by Iraq’s Shia majority, Iran’s natural ally. The U.S. invasion fulfilled Iran’s long-held dream of a Shi’ite Crescent, a continuous land bridge from the Pakistan border westward across Iran and Iraq to Syria and Lebanon on the Mediterranean. Iraqi regime change turned Iran into the regional superpower it is today. Iranian regime change? There’s no telling what unintended consequences it might bring.

Trump argued that the deal’s enforcement mechanisms are inadequate, and complained that they are scheduled to expire in a “in just a short time” — a decade from the deal’s 2015 signing — and thus leave Iran “on the cusp of acquiring the world’s most dangerous weapons.” That is, the mechanisms don’t work, and what’s worse, they’re going to expire. Rather like the old Borscht Belt joke about the visitor who complained that the food was lousy and the portions were too small.

Trump also argued that Iran continues to harbor ambitions of nuclear weaponry, but falsely claimed it didn’t, meaning the whole deal was based on a lie. That’s supposedly proven by Israeli-acquired documents detailing Iran’s plans — even though the documents date from before Iran accepted the deal. Of course, anyone who’s followed events knows that the West was fully aware of Iran’s lies before, during and after the negotiating. That, in fact, is the reason for the West’s insistence on highly intrusive inspections.

Ironically, the actual basis of the deal is an argument that Netanyahu himself put forward years ago. Addressing the United Nations General Assembly in September 2012, memorably armed with a cartoon drawing of a bomb, Netanyahu argued that Iran must be brought to heel precisely because it is a bad actor in the region and would be infinitely more dangerous if it had a nuclear weapons.

“Just imagine Iranian aggression with nuclear weapons,” Netanyahu told the U.N. There is, he said, “only one way to peacefully prevent Iran from getting atomic bombs. That’s by placing a clear red line on Iran’s nuclear weapons program.”

And that’s what the remarkable global coalition of America, Europe, Russia and China demanded and got from Iran in the 2015 deal.

For all that, Netanyahu probably emerges as the biggest winner from Trump’s decision. For years he’s been a lonely voice on the world stage, warning against Iranian nukes as a threat to world peace and to Israel’s very survival. Once the talks got going, though, he moved his own goalposts from preventing a bomb to a none-too-subtle push toward regime change. At a time when Netanyahu is plagued by corruption probes and a tense coalition, Trump’s timing couldn’t be sweeter. Indeed, quick polls conducted after the Trump announcement show Netanyahu scoring higher in a theoretical election than he has in his nine years in office.

And yet, paradoxically, the biggest loser in Trump’s announcement is probably the security of Israel itself in the face of its Iranian foe. That’s the near-unanimous view of Israel’s top military leadership. Just weeks ago, on March 25, four of the six living former chiefs of Israel’s military command shared a stage in Tel Aviv and stated unanimously that canceling the Iran deal would hurt Israel, not help it.

Of the other two ex-chiefs, one, former prime minister Ehud Barak, once partnered with Netanyahu in a 2010 plan to bomb Iran’s nuclear facilities. Barak flipped last fall, however, and publicly called for maintaining the diplomats’ deal. The sixth retiree, Gabi Ashkenazi, led the group of security chiefs who thwarted the 2010 Netanyahu-Barak attack plan. In late April Ashkenazi endorsed “nixing” the current deal at a New York symposium, although, given his record, he may have been angling for right-wing support as he prepares to enter politics.

Even the current chief of staff, Gadi Eisenkot, has weighed in, declaring in an interview shortly after the ex-chiefs’ forum that the Iran deal, “with all its faults, is working.”

At the March forum, the four retired generals were asked their opinion of the nuclear deal, since Trump’s deadline for deciding its fate was just six weeks away. They all agreed that while the deal is flawed, scrapping it would be worse from Israel’s standpoint. For one thing, they said, the deal is working as planned. Iran has halted its bomb program and dismantled its main components. For another, the deal’s partial expiration in 10 years gives Israel and the West a decade to develop other methods of restraining Iran. At the moment, Israel has more urgent problems with growing unrest in Gaza and likely West Bank violence on May 15, the 70th anniversary of Israeli independence that Palestinians mark as the anniversary of their Nakba, or “disaster.” Also on the immediate agenda is the increasing entrenchment of Iran’s conventional military presence in Syria, across Israel’s northeastern border.

Yet another critical point was raised by Mofaz and elaborated by former chief of staff Benny Gantz: that an American withdrawal would leave Washington on the sidelines, isolated in world affairs and less able to protect Israel. That could be a strategic setback of monumental dimensions.