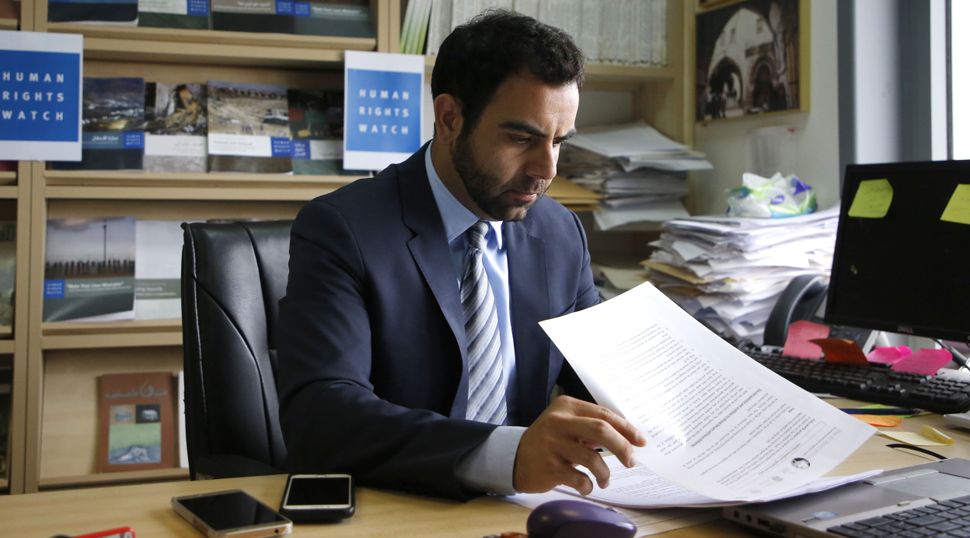 When Israeli authorities revoked the work permit of Human Rights Watch Israel/Palestine director Omar Shakir on May 7 and ordered him to leave the country within two weeks, they presumably anticipated the furious backlash that promptly ensued. After all, already last year, Israel denied Shakir a work permit, only to backtrack quickly in the face of the inevitable outcry in the international media.

If you think that Israel’s refusal to extend Shakir’s work permit now is “disgraceful,” you perhaps don’t realize how utterly disgraceful the conduct of HRW and Shakir has been.

Nothing has changed for the better since 2009, when HRW founder and longtime chairman Robert Bernstein declared in the New York Times that he was joining the organization’s critics because HRW had begun to ignore the “important distinction between open [democratic] and closed [non-democratic] societies.” Bernstein argued that this was particularly evident in the organization’s obsessive focus on Israel, which resulted in countless reports “that are helping those who wish to turn Israel into a pariah state.”

Almost a decade later, there couldn’t be a better illustration of the validity of Bernstein’s criticism than HRW’s employment of Omar Shakir as its Israel/Palestine director.

Shakir is among the lucky people who managed to turn their student activism into a career. Ever since his freshman year at Stanford back in 2004, Shakir wanted people to sympathize with the Palestinians, who were at the time engaged in the murderous Al-Aqsa Intifada, and to hold Israel responsible for their plight.

Speaking as “president of Students Confronting Apartheid by Israel (SCAI)” to The Stanford Daily in April 2007, Shakir made clear that as far as he was concerned, the problem was not Israel’s occupation of the West Bank since 1967, but rather Israel’s re-establishment in 1948, which Shakir blamed for “the destruction of the indigenous society and a 59-year subjugation of the indigenous population.”

In 2009, Shakir was protesting Israel Independence Day celebrations at Georgetown University; a year later, he marked the “the 62nd anniversary of the Palestinian Nakba (Catastrophe) and the beginning of the Israeli occupation of the Palestinian people” in a radio program that compared “Israeli and South African Apartheid.”

Alongside other notorious anti-Israel activists, he also participated in an event at UC Irvine for “Israeli Apartheid Week: A Call to Boycott, Divest, and Sanction.” The same kind of event had been advertised in 2006 under the title “Apartheid State of Israel Carries Out Holocaust,” which is just one reason why the Anti-Defamation League eventually felt it necessary to document that the “University of California, Irvine (UCI) has become a center for anti-Semitic activity in recent years.”

Shakir also makes an appearance in this ADL report, where he is cited as one of the speakers who “expressed support for the students that disrupted a speech by Israeli Ambassador Michael Oren at UCI in February 2010.” Shakir reportedly declared “it’s an honor to be speaking at the campus that made a statement heard around the world, the campus that officially said: ‘we have no place for a war criminal…’ you guys should be very proud of what you are doing.”

In his own presentation, Shakir made clear that he did not want the establishment of a Palestinian state alongside Israel, but the elimination of the world’s only Jewish state in favor of the so-called “one-state-solution.” Other presentations at this event included a speech entitled “Death to Apartheid” where the speaker reportedly “compared Jews to Nazis, expressed support for Hamas, Hezbollah and Islamic Jihad and called for the destruction of the ‘apartheid state of Israel.’” According to the ADL, Israel’s policies were also compared to “the oppression that took place in Nazi Germany.”

And yet, just three years after Shakir had the “honor” to participate in the UC Irvine hate-fest, HRW appointed him as the “2013-14 Arthur R. and Barbara D. Finberg Fellow.” When Shakir became HRW Israel/Palestine director in fall 2016, he could point to more than a decade of activism focused on the goal of eliminating the Jewish state as “qualification” for a job that would supposedly require him to be an objective observer of Israel’s conduct.

It is therefore utterly disingenuous when HRW now insists that “almost all” of Shakir’s anti-Israel activism predates his employment at HRW and that he does not promote “boycotts of Israel.” As numerous tweets from recent years show, Shakir never changed his long-held views or distanced himself in any way from his activism.

Shakir and other HRW employees are also fairly open about their disdain for a two-state solution that envisages peaceful co-existence between Israel and a Palestinian state. When Sari Bashi, the Israel and Palestine advocacy director at HRW, sneered in an op-ed last year at the “pursuit of the holy grail of a two-state solution,” Shakir warmly recommended this piece as a must-read “on how obsession with 2-state solution has provided cover for Israeli rights abuses.”

Must-read by @saribashi @hrw on how obsession with 2-state solution has provided cover for Israeli rights abuses https://t.co/g3qQ7BSr6y pic.twitter.com/Zen4gfQE5M

But the perhaps most chilling evidence of how unsuited Shakir is to play the objective role necessary for a HRW employee comes from the time between his HRW fellowship in 2013-2014 and his appointment as HRW Israel/Palestine director in fall 2016.

And yet, just some two weeks earlier, Shakir had shared what he described as a “[p]owerful cartoon on Yarmouk Refugee Camp in Syria” from the Electronic Intifada. The cartoon shows an emaciated rag-clad figure lying helplessly on the ground and holding up a key, i.e. the symbol of Palestinian demands to “return” to Israel. The destitute Palestinian is threatened by a sword-wielding Islamist, who is supported by a shadowy figure wearing a hat with a Star of David.

The cartoon is blatantly anti-Semitic in its suggestion that a shadowy Jew is controlling the terrorist group ISIS. And yet, among anti-Israel activists, it is fairly popular to demonize Israel as either like the Islamic State, or as somehow supportive of, or even allied with Islamist terrorists in Syria and elsewhere.

Shakir may not have noticed the star of David — just as he might not have noticed the rampant anti-Semitism at the 2010 “Israeli Apartheid Week” that he was so proud to attend. Most anti-Israel activists prefer not to notice, or to deny outright, that anti-Semitism is an inevitable part of campaigns that aim to demonize the world’s only Jewish state as an evil that must be eradicated.

What obligation does Israel have to allow such a person to remain in its borders?