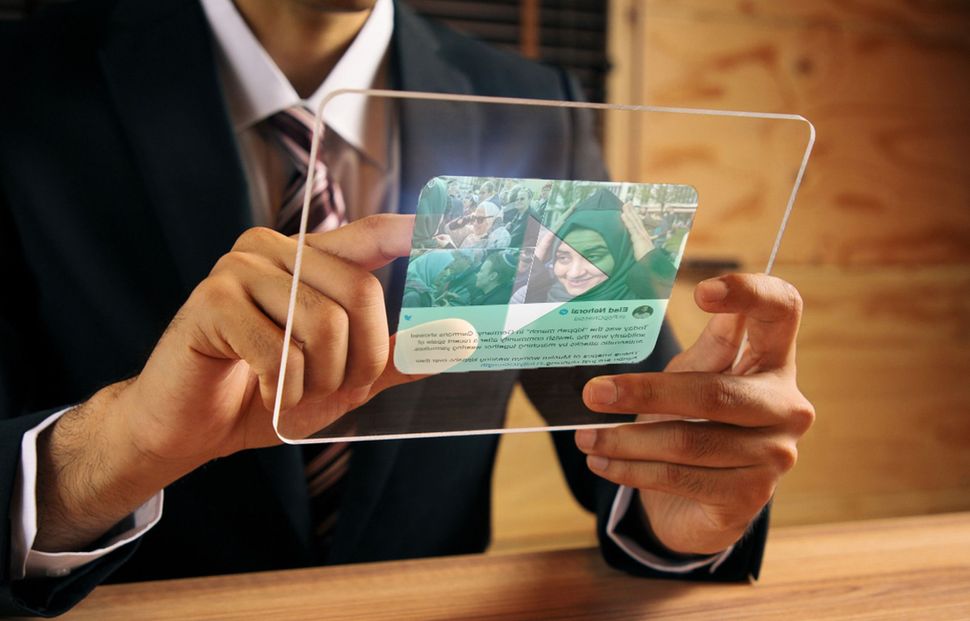 When we see an image that stirs something deep inside of us, we can’t help but share it with the world. There is just something about a man who lets another man fall asleep on him on the subway that is just so utterly sweet and beautiful. It awakens something deep inside of us, deep enough that we feel a need to share it with the world. And that’s how things go viral.

For a long time, I believed that it was part of my mission to help spread these images, to encourage the world to see the positivity around them. I still believe this, but something has changed for me.

I recently shared some utterly beautiful images which went viral: According to my Twitter statistics, over 5 million people have seen my tweet.

The tweet contained three images of Muslim women in Germany who were participating in an event called the “kippah march.” The event was organized by the Jewish community in Germany to encourage Germans to show solidarity with the Jewish community after a rash of anti-Semitic attacks in the country, partly in response to the call by a prominent rabbi for Jews to stop wearing kippahs publicly.

In these images, the Muslim women are shown wearing kippahs over their hijabs. The images are striking, an oasis of beauty in a world that feels like it’s increasingly crumbling to hate. And yet, something felt off about the response I received. People focused on the images without realizing why the demonstration to exist in the first place.

Those who reacted to the images said things like, “Love always defeats hate” and “Nice one Germany.” In other words, many people people saw the images as a sign that the fight against anti-Semitism in places like Germany was succeeding. As long as women in hijabs kept putting kippahs on their heads, everything would be okay.

But the story that inspired this act, that Jews are in such danger in Germany that they were advised not to wear kippahs, han’t been told outside of the Jewish community. There have been far fewer politicians, actors, and celebrities sharing the stories of the actual anti-Semitic acts happening to Jews in Germany recently. Often, it seems it is only Jews who seem invested in these stories.

This issue is about far more than the dynamics of internet culture. It is about a culture that sells a false narrative: that change for the less fortunate requires no real sacrifice from the fortunate. That being selfless doesn’t mean actually sacrificing the self.

The images I shared were powerful because they were captured during a brief respite from the constantly-increasing level of hate in Germany and Europe against Jews. In fact, according to the Berlin-based Department for Research and Information on Anti-Semitism, the number of individuals affected by anti-Semitism in Germany increased 55 percent in 2017.

There have also been a number of high-profile attacks, including one captured on video that helped spark the kippah march.

It was German Jews who woke me up to this reality. They commented and sent me messages, upset that my images didn’t tell the whole story.

This is precisely why I have been pressing for concrete actions for the past few days. I have no trust that today’s exceptional event will have any durable impact. https://t.co/SbZhTO0LuR

Not only did my images give a false impression of what has been happening in Germany recently — they gave a false impression of what happened in Germany that very day. One of the smaller kippah marches was broken up within 15 minutes because people started spitting on them, tearing an Israeli flag away from one of the demonstrators, calling them terrorists and open Neo-Nazis walked through the procession threateningly.

That story didn’t go viral. It hardly got shared by anyone but other Jews.

This is the inherent problem with the way social media works: just as we can often fall for “fake news” that conforms to our beliefs, we can also fall for “limited news:” news that makes us feel good about ourselves and the world, or news that, without more context, reaffirms our already-held beliefs rather than challenging them. By sharing it, we feel that have done some measure of good. In this case, it was the myth that anti-Semitism has largely been eradicated. I fear that my tweet going viral contributed to that myth, when it should have done the exact opposite.

This dynamic replays itself constantly in our discourse. We are a society that is constantly looking to pat ourselves on the back for problems that we have solved.

There is perhaps no better example of this than the election of Barack Obama and the backlash against Black Lives Matter. There was a moment in America where it seemed, for a moment, as if we had solved all of our racial problems. A black man was president.

And yet it cost very little, really, to vote a black man into office. It meant going to voting booth and making a quick choice. It is almost as easy as retweeting an inspiring image on Twitter.

It was the viral story of America, the first slacktivist moment for us all to engage in. And for well-meaning Americans who did not understand that changes to pervasive racism could not be solved just by one inspiring action, no matter how consequential, the grisly details and vile racism surrounding Trayvon Martin’s murder less than a month after Obama was sworn into office came as a shocking wakeup call.

When the Black Lives Matter movement was born, white Americans faced an internal crisis: How could there be an entire movement devoted to fighting for black lives when a black man was the President of the United States?

And so, there was a backlash, no different than what Martin Luther King Jr. described in “Where Do We Go From Here?” He discussed the white reaction to the fact that blacks still insisted on reforms after desegregation was achieved: “White America would have liked to believe that in the past ten years a mechanism had somehow been created that needed only orderly and smooth tending for the painless accomplishment of change.”

But for blacks, who had to actually live with the daily pain of racism, this was not a reality: “Loose and easy language about equality, resonant resolutions about brotherhood fall pleasantly on the ear, but for the Negro there is a credibility gap he cannot overlook. He remembers that with each modest advance the white population promptly raises the Negro has come far enough. Each step forward accents an ever-present tendency to backlash.”

The same is true today. We have seen the rise of racism and the election of a president who reveled in that rise. It was the result of the backlash of white Americans saying that blacks have “come far enough.” Study after study has shown this to be the case.

The same is true for Jews in Germany. While appreciative of the solidarity shown, to them and the virality of positive images, they must still live every day in fear for their safety. No one rally will save them and no viral post that makes us feel good will help them.

And so while I am happy, and beyond grateful that the images I shared spread far enough for so many millions to see, I hope that we will one day reach an age where calls for sacrifice, for deep digging, for structural changes also go viral. Otherwise, these images lead to people to wonder how on earth Jews can dare to complain about anti-Semitism when they have it so good. That the Jews have “come far enough.” If our society is to learn anything from our civil rights history, it is this: symbolic acts matter, but only insofar as they lead to a place of actual change. If they don’t, then our sharing them is really just an act of selfishness.