Testing The Limits Of Religious Liberty 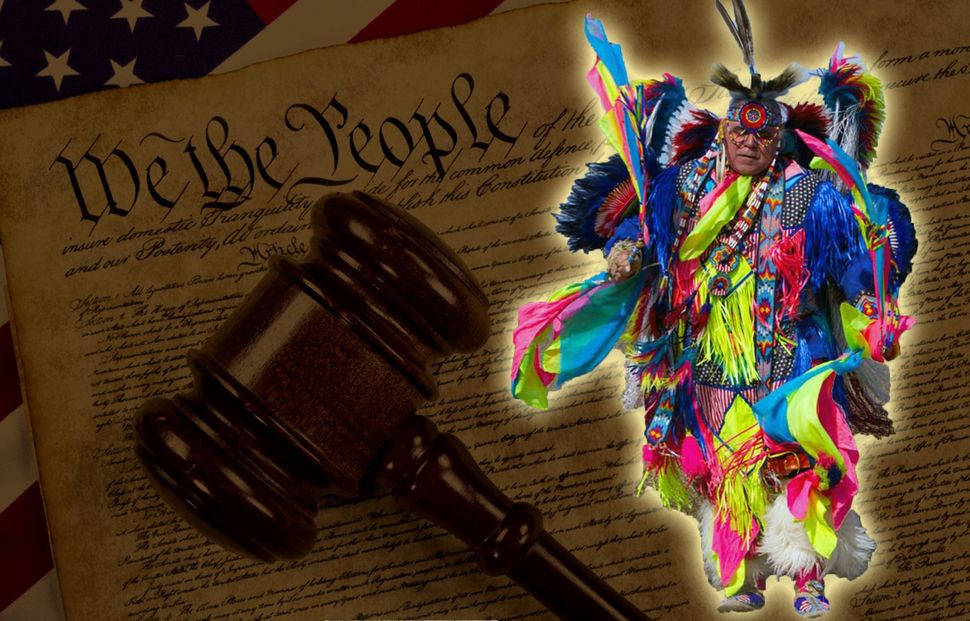 I don’t think an eagle has ever danced in The Pierre before. The opulent five-star hotel on the posh southeast corner of Central Park is known more for its lavish decor and indulgence of man’s hedonistic nature than for its embrace of nature itself. This particular eagle, Pastor Robert Soto of the Lipan Apache Tribe of Texas, wore traditional clothing fit for the ceremony at hand: Flamboyantly-dyed leather and sacred eagle feathers. To tinny music, he danced a traditional dance of his tribe, kicking off the May 24 annual Canterbury Medal Gala of Becket, a small law firm whose mission is “to protect the free expression of all faiths.” Soto’s undulating wings depicted the eagle’s life from birth to death, and seemed to mock the stuffy atmosphere of the gilded dining room.

In Native American culture, eagles have the power to act as intermediaries between man and God, carrying prayers with them skyward. The eagle dance is generally performed when there’s a need for something — rain, or good crops.

But this particular rendition was more of a victory dance. 12 years ago, the federal government stole Soto’s wings. The evening’s hosts had helped him win them back again.

In the 2006 Operation Powwow, undercover federal agents raided a Native American powwow and confiscated 42 of the Lipan Apache’s eagle feathers. “My wife, she was running in the kitchen, she goes ‘hide our bustles, hide our feathers because the government is here to take them all,’” Soto recalled. It’s illegal to possess eagle feathers in the United States without a permit. Although the government routinely grants museums, zoos and other Native American groups this privilege, since the Lipan Apache Tribe is not federally recognized, they were not allowed to possess this sacred object. This bizarre use of federal funds kicked off a dizzying fight for the tribe’s religious freedom that only ended in 2016 with Becket’s intercession.

On this particular evening in The Pierre, Becket was honoring Rabbi Meir Soloveichik, leader of America’s oldest Jewish congregation — founded in 1730 — and grand-nephew of Rabbi Joseph B. Soloveitchik, who essentially founded Modern Orthodoxy. Soloveichik took the podium with the posture of one who reads ten pages for every word that he speaks, someone more used to transmitting ancient wisdom from the pages of the Torah than from his own substantial intellect. “Ner Hashem Nishmat Adam,” — “The light of God is the soul of man” — he recited from the podium, telling stories of Jewish resistance older than the country itself.

To a Modern Orthodox Jew like myself, Soloveichik’s stories — of Natan Sharanksy’s brave Soviet Jewish resistance, of the eternal connection between God and his people, the fact that Jews have been on the Upper West Side longer than the United States has been a country — are warm and familiar. Though inspired and amused by Soloveichik’s retelling of how Sharansky tricked his gulag overlords into responding “amen” to an impromptu Hebrew blessing calling for his return to Jerusalem, I was gobsmacked by the foreign religiosity that pressed down on the evening from every angle. But like Giles Corey in “The Crucible,” I felt my insides screaming, “more weight!”

“Our country is ruled by a fool, a villain,” Becket CEO William P. Mumma proclaimed from the podium to stunned silence. Unfortunately, he wasn’t talking about President Trump, but rather… about Humpty Dumpty?

“Who is the master of what words mean in America today?” he asked. The correct answer, I soon learned, was progressives and social liberals — and the ideal answer is the constitution. He praised Trump’s recent circuit court nominees.

None of the pieces quite fit together. As another character in Lewis Carroll’s novels, the Cheshire Cat, would say, “We’re all mad here.” The guests were a collection of practitioners of ancient religions and abandoned values, Reagan’s “Moral Majority” if there ever was one. The first person I saw when I entered the hotel was a nun in a habit, a floor length couture dress and a crucifix the size of my palm. The menu was inspired by foods from Israel, a sign proclaimed, in honor of Soloveichik — though none of it was kosher, unless you especially asked. The crowd was diverse religiously but there were few people of color present, among them, the woman hired to play the harp, who was drowned out by the drinking din. From the first speaker who asked Mary to bless this dinner to the near-pandemonium from Mormon attendees when it was announced that desert would include chocolate milk (and plenty of wine for the Catholics), I felt like Alice in her Wonderland, surrounded by unfamiliarity as the evening grew “Curiouser and curiouser!”

That is not to say it wasn’t pleasant. My table included Catholics and Mormons, two groups of people I rarely get to dine with. When my shrink-wrapped, hermetically-sealed kosher food arrived, I briefly explained kosher laws to the stunned Catholic lawyer to my right. “That must make family gatherings complicated,” he smartly surmised. When the Mormon to my left asked if Rabbi Soloveichik was “the same type of Jew as Chabad,” I briefly explained the difference between Hasidic and Sephardi and Modern Orthodox Judaism. He told me about his Mormon mission to Brazil, the process of learning a language in six weeks, his work with Yad V’Shem and his brother, who was studying at BYU Jerusalem. We were two of the few attendees not drinking.

Before we dug in, an archbishop led a prayer. He asked the almighty that we “may see humanity in the faces of the poor,” blessed Rabbi Soloveichik and his family and reminded those gathered that “God really never abandons those who love him.” I had no problem giving a hearty amen.

The evening was a testament to the importance of interfaith work, but also to its limits. As I left the five-star hotel, I couldn’t help but think of the tension between the religious diversity celebrated inside and the people left out in the cold. Although they noted, proudly, that Muslim guests were in attendance, Becket didn’t formally oppose Trump’s Muslim ban, though they did submit a brief. “On one side, there are claims that the government has targeted a particular religious group for disfavor,” they noted. “On the other side, the government offers weighty national security interests and the preservation of American lives, in the context of a slew of terrorist incidents around the world that are claimed to be religiously motivated.”

Becket also helped bring a case to the Supreme Court that allows organizations to refuse contraceptive coverage to their employees, a policy that violates Jewish women’s religious liberties. They defended two Catholic foster placement groups in Philadelphia who were refused referrals from the city because those two organizations refuse to place foster children with same-sex couples. While a heartwarming video showcased hurricane-swept churches still managing to feed the poor, would they have equally highlighted the poor people that, due to a new Trump policy, might now be kept from a hot meal if they refuse to listen to a sermon? And what about fighting for the African Americans from the 111-year-old Hopewell Missionary Baptist Church in Greenville, Mississippi, which two years ago was burned and vandalized with the words “Vote Trump” spray-painted onto the building? Do they not need and deserve religious protections, too?

Becket is undeniably fighting important fights for freedom of religious practice — but that’s only one side of the picture.

The First Amendment states that “Congress shall make no law respecting an establishment of religion, or prohibiting the free exercise thereof.” Before it protects religious freedom, it crucially enshrines freedom from religion.

This month, on National Prayer Day, President Trump issued an executive order that may damage that protection. His order establishes a Faith and Opportunity Office within the White House and will appoint a faith adviser to, as Joshua Rokach writes in these pages, “bring religious considerations into policy debates.”

But does Trump, a man of famously thin moral fiber, represent any of the Becket people? I don’t think so. Where he has self-interest, they have a deep commitment to their faith traditions and allowing others to practice their own however they see fit. But both parts of the First Amendment, in a truly free republic, are equally important. Are Becket and its supporters as troubled by religious overreach and government-backed religion as they are by the government infringing upon religious practice? And will they continue to fight not just for Sikhs and Catholics and Native Americans and Jews, but also for Muslims trying to peacefully seek refuge in our country?

As the great Lewis Caroll wrote:

“Either it brings tears to their eyes, or else —”
“Or else what?” said Alice, for the Knight had made a sudden pause.
“Or else it doesn’t, you know.”

Testing The Limits Of Religious Liberty