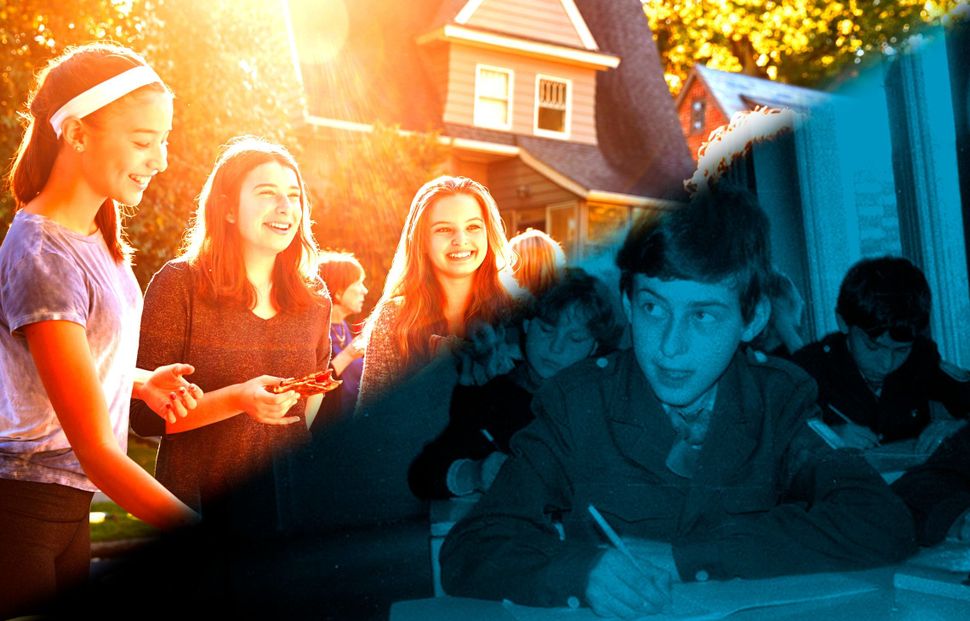 As a Jewish Soviet immigrant living in a tony New York City suburb, I don’t always fit in. Smalltalk in our WASPy town tends to center around real estate prices, traffic, and sports scores. Even the Jewish moms have impossibly shiny hair and perfect, glossy nails, their toned bodies forever clad in yoga pants.

My sons’ Hebrew School was the one oasis from all that divided me from my neighbors. At our local egalitarian Conservative Jewish Center, Hebrew School was a place where my pride in being Jewish, which had to be squashed back in the former USSR, met my sons’ eagerness to learn about their heritage, a heritage shared by the American Jews amongst whom we live.

But that oasis now seems to be drying up. A few Sundays ago, instead of the usual cooking, cleaning, and laundry I catch up on before the start of yet another work week, I found myself in a meeting meant to foster conversation between the Hebrew School’s administration and the parents about the direction of Jewish education for our children.

The meeting had been convened because the yoga moms were not happy. They had come to voice their concern: Hebrew School isn’t fun enough.

Why don’t we have field trips and games?

Why is there stress leading up to the Bar Mitzvah?

I was shocked. I wanted to scream. It’s not supposed to be a game! Being Jewish isn’t a joke!

But what I really wanted to say was that unlike field trips and baking cookies, being Jewish isn’t optional – something anyone who’s been persecuted for their religion knows. And yet sitting there and listening to the moms with their great hair and perfect nails complain, I realized that my cries would be falling on deaf ears.

And I realized something else, too: With its plenty and its safety for religious minorities, America had given Jews a lot. But it had also deprived its Jews of something – something precious.

I think it’s fair to say that I didn’t need Hebrew school to teach me that I was Jewish.

I grew up at the tail end of the Soviet era, during which it was illegal to practice religion. Still, my grandfather observed the Shabbat by bringing my grandmother fresh flowers and a loaf of bread (no challah at the local Soviet bakery). My other grandfather, a decorated World War II surgeon, always managed to get matza around springtime. My mother’s side still spoke some Yiddish to keep conversations private from the kids.

At the age of four or five, I was informed that I was Jewish, and I think my parents waited until I was old enough to keep my mouth shut.

“But can I tell the policeman?” I asked after the big revelation.

“No you cannot tell the policeman. And don’t say the word ‘God’ in public, either.”

The minute the borders opened, my parents, grandmother and I went through the process of immigrating to America, through Austria and then Italy, like so many other Soviet Jews.

In Italy I officially celebrated my first Jewish holiday – Purim. I learned about the fast. I heard Megillat Esther.

Though I was grateful to finally come to the U.S., I never fully assimilated, and American Jews have always remained a distant cousin for me.

My closest friends are also themselves immigrants or children of immigrants. We do not often speak of immigration or even speak our native language, but somehow I feel that we understand each other more deeply.

Most of all, we share what it means to be a Jew.

Jewish life in Soviet Russia involved closed-door conversations. It was in the talk of politics and short-wave radio, the books from the “underground” press and a quiet pride about Israel.

Writers and storytellers more skilled than I have described what it was like to be a Jew under Soviet rule in books, movies and poems. But I lived it. I sat quietly, often the only child at family or communal get-togethers (Jewish families were not large, and being an only-child was the norm) and absorbed the atmosphere.

There I was witness to the deepest of friendships, which ran deeper than proximity to something unspoken at that time: the fact that we were Jews. We supported each other. We did not have to call before coming over.

We knew who we were just by a glance. Even now, I struggle to convey how. It wasn’t about having a Jewish face, but rather, some indescribable yet perfectly recognizable essence.

This essence of being a Jew cannot be taught in a two-hour class in Hebrew School. But it is something that can be extinguished.

In Soviet Russia, they may have subdued the religious rituals, but in suburbia, they have extinguished the pride and solidarity that motivates oppressed Jews to stick together.

When life is so easy, our Jewish identity takes a back seat to keeping up with the Joneses.

And it’s here that our kids learn the falsehood that being Jewish is a choice. My Jewish community leaders seems to think that they are competing against the afterschool soccer and softball leagues for congregant families’ attention and money. But if that’s the case then we as Jews have already lost the fight. If we put Judaism in the same conversation, on the same metric, as extra-curriculars, then it will become an option.

And this is what Russian Jews can teach our American cousins. Judaism is not supposed to be “fun,” because Judaism is not optional. Anyone who has experienced persecution did not choose to do so. But if despite hardship they chose to value Judaism, then they truly value their Jewish identity.

The choice is not whether to be a Jew, but how to foster and enrich our Jewish identity.

Because of what I experienced, my Jewish essence is palpable to me; it is in my every moment. And it’s in my children’s essence too, in their bones.

And it is up to us, the parents and the community, to tell and show our children that we value Judaism and feel lucky to have this incredible privilege of practicing our religion. When we value and appreciate the opportunity, it magically becomes fun, no cookies required. When we convey to our kids that Hebrew School should be fun, we devalue and dilute our Judaism by making it seem optional.

My kids know how lucky they are to have the privilege of telling the local supermarket cashier that those are Hannuka candles in our shopping basket, without the fear of discrimination or government persecution. They know how grateful we are that the police protect us at High Holiday services, rather than take down the names of those who came, for future interrogations.

Maybe that is why my children have not once complained about going to Hebrew School (if only I could get them not to complain about chores!).

That which is worth having is worth fighting for. American Jews of second and third generations never had to fight for their Judaism. Thus, it became all too easy for them to choose sports over Jewish education, to suggest that we pick and choose which Tefilot to prioritize.

I feel honored that my grandparents and parents chose to sacrifice their safety to practice what remnants of Judaism they could. If we forget where we come from, we are doomed to lose our way, to lose that which makes us Jewish. We become too comfortable in our suburban existence. It is then that it becomes easy to choose not to believe in God, to forego establishing a Jewish home.

Having seen how quickly Jewish traditions can be eroded, in the span of one generation, I say let us not dilute but enrich. Let us not learn just a few melodies, but as many as we can. Let us devote more time and resources to becoming a practicing, active Jew, not less!

This is not what my fellow Hebrew School mothers want — less. At that meeting, their message was clear: I want my kid to know what it means to be Jewish, but in two hours a week or less, and all the while doing yoga or baking cookies.

But we do not need to invent a new shiny wheel. We only need to appreciate the old.

Yana Basis is a working mom deep in the heart of suburbia.