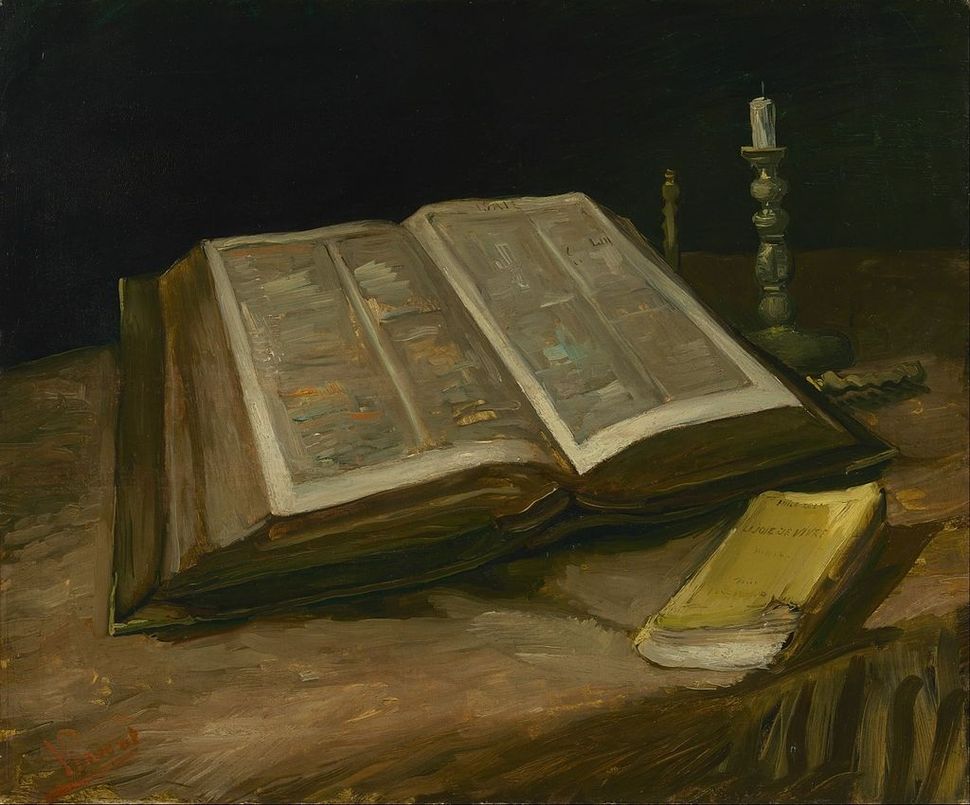 In a previous piece in these pages, I discussed the importance of the semantics of traditional Jewish female names. In various countries, Jewish women have often had personal names with pleasant meanings in their local, everyday language.

At first glance, that doesn’t seem to be the case for Jewish men. Indeed, since at least the end of the first millennium, every man in the Diaspora has had a religious name (known as a shem hakodesh) that is taken from the Bible or is based on Hebrew, the cultural rather than the vernacular language. Most common names in that category — Moses, Abraham, Isaac, Jacob — are chosen because of the importance of their corresponding biblical personages, not because of their meanings in Hebrew.

Yet, a more attentive look at history shows that, even for men, the meaning of names was often a crucial component of parents’ decision to choose them.

This is true for many Hebrew names. In various communities, Menachem was a commonly used name. In the Bible (2 Kings 15:14-22), it is the name of a king of Israel known to be particularly tyrannical. Surely, the popularity of this name was due not to this personage, but rather to the meaning of the corresponding noun in Hebrew: “comforter.” The name was often given to male children born during the month of Ab, associated in Jewish tradition with mourning for the destruction of the Temple in Jerusalem.

Among the post-biblical Hebrew names whose assignment could be related to periods of birth are Hanukkah, Pesach (Passover), Nissan (a Jewish month), and Yom Tov (holiday).

In the Diaspora, the meaning of names in everyday languages determined their frequency of use. This was true for both names borrowed by Jews from local Gentiles and those created by Jews. Kalonymos (good name), Theodoros (gift of God) and Parigoros (comforter) started to be used by Greek-speaking Jews in antiquity; all of them were still used in medieval Western Europe. The first two gave rise to the Yiddish Kalmen and Todres, respectively.

In Muslim countries, from the Middle Ages to the 20th century, Jews commonly used such Arabic names as Faradj (consolation), Hassân (beautiful, perfect), Mas’ûd (blessed, lucky) and Mansûr (victorious, supported by God). One name from the same group, Maimon (fortunate), became used outside of Arabic-speaking communities because of the fame of the Sephardic scholar Moses ben Maimon (Maimonides, 1135-1204).

In sources from medieval northern France, we find numerous references to Bonami (good friend), Bonenfant (good child), Bonjuif (good Jew) and Vivant (living). In southern French regions, such as Provence and Languedoc, and in Spain, some of the most common male names of the time were Astruc (lucky), Bendit (blessed), Bueno (good), Crescas (from the root meaning “to grow”) and Vital/Vidal.

Famous scholar David Kimhi (or, more properly, Kamhi, 1160–1235) appears as Maistre Petit in French sources. If the word maistre just means “teacher” and was applied to rabbis, the exact nature of Petit (“small” in Occitan and French) is usually misinterpreted. In numerous modern books, it is considered to be his byname.

Certain authors are intrigued by the fact that this name was also used by several other members of the same family. From this, they assert that Petit was a kind of family name used along with the surname Kimhi. The solution to this enigma is much simpler. Petit was just a given name used in vernacular contexts. Of course, in a specifically Jewish scholarly context, the same man was using his religious name (shem hakodesh), David. In various Christian documents from medieval southern France, Petit is often found as a Jewish given name.

Numerous rabbinical authors claim that Shneur (Yiddish “Shneyer,” the source for the surname Schneerson) is based on the combination of two Hebrew words: shne (two) and ur (light). One work states that the name was first given to a boy to honor two of his male relatives who bore names associated to light, Biblical Uri (my flame) and Talmudic Meir (illuminated). Another author asserts that it first appeared as a joke nickname given to a man whose father was Meir and whose father-in-law was Uri.

Of course, given names never result from jokes. Moreover, the above etymology does not fit basic grammatical rules: The noun following “two” should have the plural and not the singular form. The name first appeared in southwestern Europe. Its original form was Senior, meaning “senior,” “elder” or “master.” French Jewish migrants brought this Romantic name to medieval Germany.

In rabbinical practice, variants of the Yiddish names Fayvush and Faybus were generally considered to be derived from Phoebus, the Latin form for the Greek Phoibos, god of the sun. The association was thought to have been corroborated by the use of Fayvush as a secular equivalent (kinnui) for Uri.

Yet, the study of the historical phonology of Yiddish dialects and the relative chronology of references to various forms of this name in Christian documents clearly show that the ancestor of Fayvush was not Phoebus, but the Romance given name Vives, or Vivus (living). This name was brought from France to medieval Rhineland, where the initial sound shifted from /v/ to /f/. It was also in medieval western Germany that the root vowel /i/ became long and later gave rise to the diphthong. The variant with the internal /b/ had already appeared in Central Europe, and in Slavic countries, the final sounds of this given name were reinterpreted as the Slavic diminutive suffix –ush.

In certain cases, given names were chosen because their meaning was identical or close to that of some Hebrew name. For example, various names based on words whose root means “life” (Vives, Vivant, Vital, Vidal) could be taken as local equivalents for Haim. Yom Tov (literally “good day”) gave rise to Bondia (Catalan), Bonjorn (Occitan) and Bonjour (French). Names meaning “blessed,” “comforter” or “gift” could be chosen because of Baruch, Menahem and Nathan, respectively.

Yet, this explanation is invalid in other cases. Numerous Yiddish male given names were used because of their meaning and without any etymological link to Hebrew names. Compare Lipman and Liberman (beloved man), Zusman (sweet man) and Ziskind (sweet child), Zundl (small son) and Fishl (small fish). In Eastern Europe, in order to cheat the Angel of Death, certain Jewish boys even received such names as Alter (old man) or Zeyde (grandfather).

In this context, most intriguing are the Yiddish animal names: Leyb (lion), Hirsh/Hersh/Herts (stag), Ber (bear) and Volf/Wolf. All of them were common in medieval western Germany. During the 18th-19th centuries, in various communities of Eastern and Central Europe, the first two of them were usually among the five most common male given names (others being Moses, Abraham, Isaac or Jacob), while the last two were regularly present among the 10-15 most popular names. Usually, it is asserted that the whole series of names stems from the biblical passage (Genesis 49) in which Jacob blesses his sons. Judah is compared to a lion, Naftali to a gazelle, Benjamin to a wolf and Issachar to a donkey. In the Ashkenazic tradition, the last symbol was replaced by another — a bear, most likely because of the pejorative connotation of “donkey” in non-Jewish European cultures.

In theory, the common use of Leyb and Volf could be partly explained by the popularity of the names Judah and Benjamin. A similar argument would be much weaker for Hirsh/Hersh, however, since Naftali was rarely used. In the case of Ber, such an argument cannot be valid.

First of all, we do not know precisely why donkey was replaced with bear — the two animals have little in common. Secondly, Issachar was an exceptional name. As a result, it is reasonable to argue that the common use of all four Yiddish names was caused by their semantics; that is, the qualities — primarily force and virility — generally attributed to these animals by Christian Europeans, while their biblical connections were secondary.