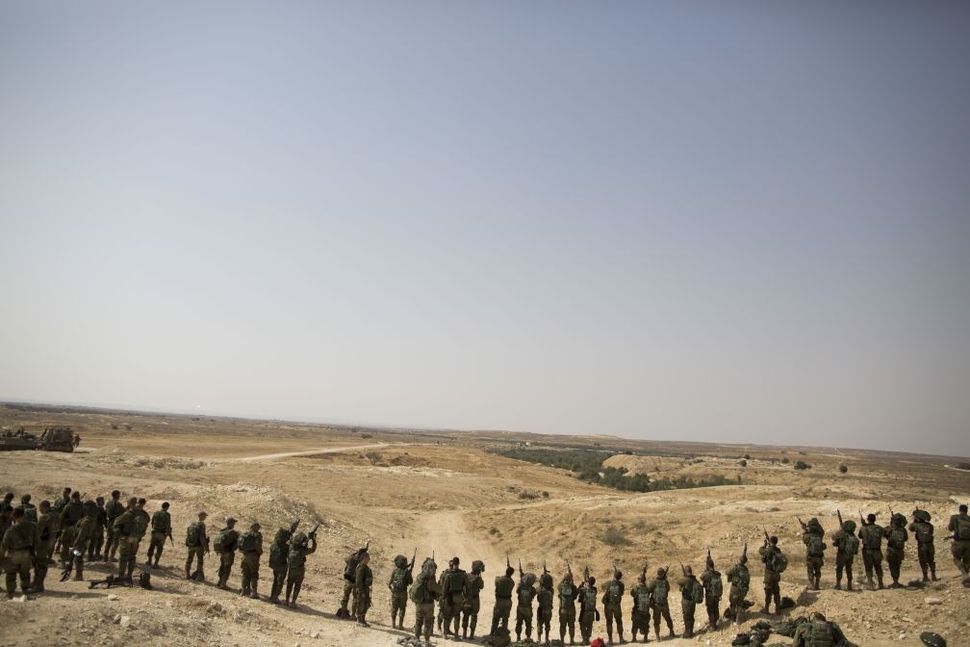 Israeli soldiers preparing for an exercise on July 3, 2018 in Tze’elim, Israel. (Photo by Lior Mizrahi/Getty Images) Image by Getty Images

Last week, five participants of Birthright walked out on the program and straight onto a tour of the segregated city of Hebron with IDF veterans from Breaking the Silence, where they saw what Birthright desperately tried to hide.

They saw the checkpoints, the streets Palestinians aren’t allowed to walk on and the caged windows that protect Palestinians from settler violence.

Their strong actions were followed by strong words as they urged fellow American Jews to refuse to cooperate with pro-occupation propaganda like Birthright: “It is morally irresponsible to participate in an institution that is not willing to grapple with reality on the other side of the wall. That’s why we’re on our way to Hebron now,” they wrote in a statement.

These five brave women seem to have realized something that I failed to see while I was chairman of the Jewish Agency and speaker of the Knesset: Israel doesn’t have a public relations crisis; it has a moral crisis.

Instead of being drawn into Sheldon Adelson’s free trip, these women insisted on acting according to our Jewish values.

As Jewish women, they could have indulged in their privilege and enjoyed a fun week in Israel. But instead, they chose to acknowledge their responsibility for the oppression of Palestinians living under the occupation and heed their moral obligation to oppose it.

Birthright, like every other Hasbara project, is a practice in augmented reality. It is Israel’s attempt to talk the talk without walking the walk, to be perceived as a liberal democracy while imposing a military regime on Palestinians in the territories and expanding settlements in the West Bank, all so the international community and world Jewry support — or at least don’t interfere with — what Israeli conservatives see as Israel’s real birthright: controlling the lives and future of millions of Palestinians.

The truth behind Hasbara is actually the understanding that Israel’s occupation cannot be justified to anyone who truly believes in democracy and universal human rights. This is exactly the reason why conversations about Israel’s responsibility for its occupation immediately turn into a long chain of “what-aboutisms.” Agents of Hasbara, like the guides of Birthright, cynically deflect the hard questions about the reality on the ground to subjects like Palestinian violence, the high-tech nation, cherry tomatoes or the exaggeration of gay rights in Israel. But the truth is that the key to good public relations is good public behavior.

All this makes me ask a few questions. What would happen if Birthright actually did hold the open conversation it claims to encourage? What would happen if hundreds of thousands of young Jews came to Israel not only to see the beautiful beaches in Tel Aviv with still-conscripted soldiers, but also to see the segregated streets of Hebron with the soldiers that broke their silence?

What if instead of talking about their birthright during sunrise in Masada they would talk about tikkun olam while facing the packed human cages full of Palestinian laborers as they attempt to cross the Qalandia checkpoint at 4 a.m.?

If we have nothing to hide, then let’s show them everything.

For years, the Israeli government has thought it could demand that Jews around the world check their liberal values at the door to blindly support the occupation. We didn’t want a conversation or a relationship with world Jewry; we wanted submission to our agenda.

Last week’s walkout is the inevitable consequence of our hubris.

The results of the moral gap that has widened between Israel and Jews around the world due to the past 51 years of occupation are showing in the youngest generation. The cooperation between young progressive Jewish activists from IfNotNow and Breaking the Silence is a sign of the new bridges that are being built based on democracy and belief in the importance of human rights.

These brave young people are fixing the relationship my generation has insisted on breaking. This is a sign of hope for an Israel without an occupation based on equality and justice for both Israelis and Palestinians.

Avrum Burg has served as speaker of the Knesset, Jewish Agency chairman and interim president of Israel.