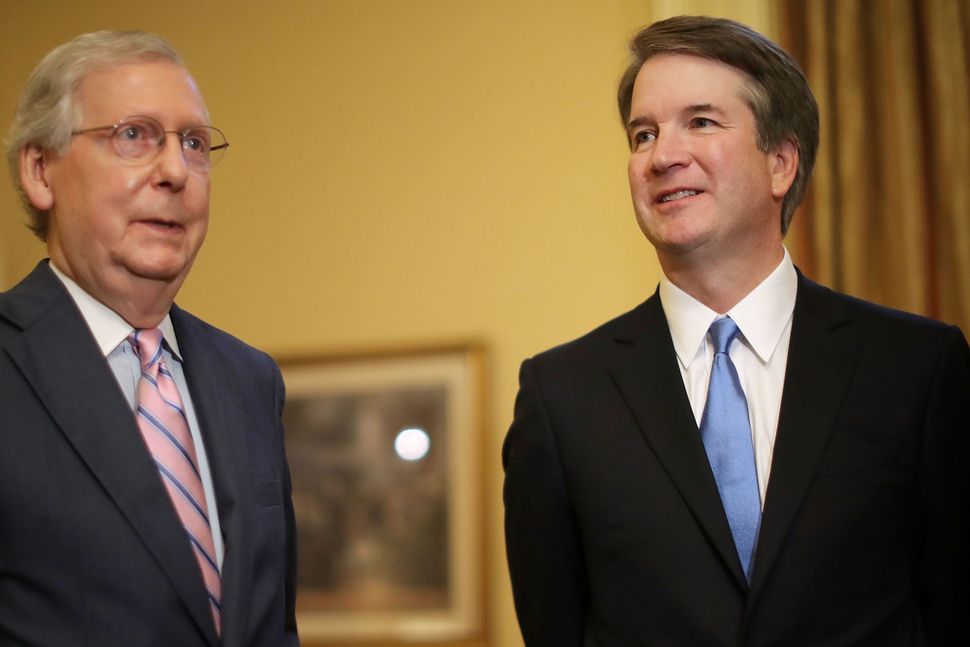 When Justice Anthony Kennedy announced his retirement from the Supreme Court, many immediately predicted the worst. NPR’s Nina Totenberg, channeling R.E.M., proclaimed it “the end of the world as we know it.”

Others were less convinced. To House Minority Leader Nancy Pelosi, Kavanaugh’s nomination is “a destructive tool on a generation of progress for workers, women, LGBTQ people, communities of color & families.” Democratic Senator Richard Blumenthal attributes to the nominee, “a very extreme hostility to many of the precious rights and liberties that make our nation great.” Former Virginia governor Terry McAuliffe said that Judge Kavanaugh’s nominaiton “will threaten the lives of millions of Americans for decades to come.” And Senator Bernie Sanders called Justice Kavanaugh “a rubber-stamp for an extreme, right-wing agenda pushed by corporations and billionaires.”

The foremost fear of the end-of-the-worlders is the fate of Roe v. Wade, even though Mr. Kavanaugh has never ruled on any case directly dealing with the right to abortion. But there are certainly grounds for thinking that the nominee – no less than Professors Laurence Tribe, Alan Dershowitz, Cass Sunstein, Kermit Roosevelt and others – believes Roe was not rightly decided in 1973.

As an Orthodox Jew, I oppose abortion on demand. And yet, we Orthodox Jews do sometimes need access to abortions according to Jewish law. For this reason, we consider the right of women to access abortions, at least in exceptional circumstances, to be important.

But even if the decision were reversed – or, as is more likely, various restrictions on abortion upheld – by a newly conservative-leaning Supreme Court, there will not likely be any sea change in American society.

“Morning after” pills are readily available, and a growing majority of Americans believe that women should be permitted to terminate even later-term pregnancies. Even if it comes to Planned Parenthood’s having to pay for expectant Iowans’ plane tickets out of state, the nation’s coat hangers will remain safely hanging in its closets.

A broader change that a conservative-majority High Court may bring about is protection of religious Americans’ rights to adhere to their faiths.

In recent years, the Supreme Court has fine-tuned what religious liberty means in America.

In Burwell v. Hobby Lobby, the Court ruled that a closely-held, for-profit Christian company should not have to provide its employees with insurance that covered services that went against the company’s faith. And in Trinity Lutheran v. Comer, the Court ruled that a church that wanted to build a playground should not be ineligible for state funds to do so. In the Masterpiece Cakeshop case, the court ruled that members of a Colorado commission had shown “hostility” and “disrespect” for the religious views of a baker who declined to make a wedding cake for a same-sex couple.

Such respect for religious Americans is likely to be a feature of the new High Court. Although Judge Kavanaugh has been criticized by some social conservatives for not being sufficiently far to the right, he chaired the Federalist Society’s Religious Liberty practice group and wrote pro bono amicus briefs defending religious believers in high-profile Supreme Court cases.

As a lawyer, he represented a Jewish congregation, Adat Shalom, in its fight against Montgomery County, Maryland, which sought to halt construction of a building. And, as a judge, he wrote a strong dissent in 2015, when his fellow D.C. District Circuit judges decided not to take a case involving a group of priests who objected to the Obama administration’s rules on contraceptive coverage.

Increased respect for religious rights, of course, alarms some citizens. Secularist crusader (no, unfortunately, it’s not an oxymoron) and best-selling writer Susan Jacoby contended recently in the New York Times that the phrases “religious liberty” and “religious freedom,” which, she says, have traditionally meant “the right of Americans to practice whatever faith they wish,” are being “altered to mean that government should foster a closer relationship with those who want to mix their Christian faith with taxpayer dollars.”

But religious Americans’ concern is not about Christianity or, at least for the most part, equitable funding for religious institutions’ non-religion-entwined services.

It’s about things like not being forced in our private and business lives to subscribe to a secularist societal vision, not being discriminated against by disdainers wielding ad hoc zoning ordinances. About being able to educate our children as we see fit and not being called bigots for our sincere beliefs about proper human conduct.

The U.S. Constitution, pace Ms. Jacoby, does more than permit us to privately “practice our faith.” It offers us protection from discrimination by government for doing so.

That foundational document does not anywhere reference any “wall” separating religion and state. That conceptual construct has been erected, piecemeal, over many years, since its use in 1802 by Thomas Jefferson. Its earliest use, though, was in 1644, when the founder of the Colony of Rhode Island and Providence Plantations, Roger Williams, wrote that “[A] hedge or wall of separation between the garden of the church and the wilderness of the world” was necessary to ensure colonists’ freedom of religion.

I’m intrigued by the first metaphor he used. “Wall” strikes me as too starkly Pink Floydian (or Trumpian). “Hedge” conjures a less charged image. And hedges, we all know, benefit from occasional trimming.

Some of us may feel fear at the thought of a Supreme Court willing to undertake that conceptual yardwork. But some of us feel hope.