No, Alexandria Ocasio-Cortez Is Not Bad For The Jews. But 9 GOP Candidates Are 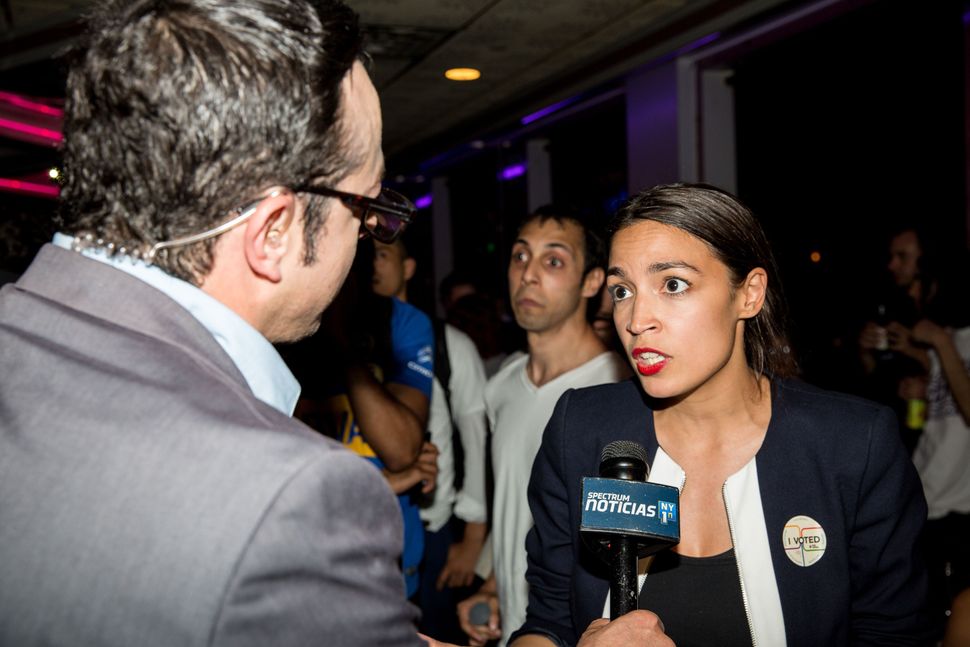 Ever since Alexandria Ocasio-Cortez’s surprise win over 10-term Rep. Joe Crowley in a congressional primary in New York, there’s been a steady drumbeat of protest from the Republican Jewish Coalition.

Unlike many other Republicans, who oppose Ocasio-Cortez’s avowedly socialist views, the RJC has since the day she won tried to smear her as bad for the Jews.

And at a time when no fewer than nine candidates with ties to Nazis or white nationalists are on GOP tickets, it’s a shameful misuse of time and outrage.

It started with a photo of a known anti-Semite who weaseled his way behind Ocasio-Cortez at an opportune moment, stealing a photo op on victory day. His name is Thomas Lopez-Pierre, and he ran for office in 2017 on a campaign of “protecting tenants from greedy Jewish landlords.”

Ocasio-Cortez was quick to denounce Lopez-Pierre, as well as his ugly views. “No idea who this guy is, hundreds of folks walked into the hall open to the public last night,” she tweeted. “I absolutely denounce any such bigoted and reprehensible statements.”

Thank you for this opportunity and your graciousness here. No idea who this guy is, hundreds of folks walked into the hall open to the public last night. I absolutely denounce any such bigoted and reprehensible statements.

But the RJC never acknowledged this; instead, the attacks have continued, shifting from anti-Semitism to anti-Israel.

During the March of Return Gaza protests earlier this year, Ocasio-Cortez tweeted, “This is a massacre,” writing, “I hope my peers have the moral courage to call it such. No state or entity is absolved of mass shootings of protesters.”

Her comments may sound extreme to some, especially given that Hamas claimed 50 of the dead to be their militants, which many in the pro-Israel camp took as vindicating Israel’s actions.

Ocasio-Cortez’s tweet however came two days before Hamas made the announcement. And even after they claimed the dead, many Jews agreed with Ocasio-Cortez that the events on the Gaza border were a shameful overreaction on the part of Israel’s military. Two journalists, a medic, and numerous children were killed among the Hamas militants, some of whom were also unarmed.

Calling for accountability for Israel is in no way problematic; if Israel was justified in every bullet it fired, let it prove that to the international community.

Others have noted that Ocasio-Cortez is a member of the Democratic Socialists of America, a group that has endorsed the boycott, divestment and sanctions of Israel. And yet she herself has cleverly remained silent on the issue.

Ocasio-Cortez’s views are worthy of examination and, if necessary, criticism. And yet her comment about a massacre in Gaza pales in comparison with what’s doing in the GOP, where there are no fewer than nine GOP candidates with ties to Nazis.

Just yesterday, robocalls for California congressional candidate John Fitzgerald told bewildered Californians that Jews are taking over the world and “must be stopped.” He’s not the only one. Seth Grossman, on the GOP ticket for New Jersey’s 2nd Congressional District, has shared articles from prominent white nationalist websites. Arthur Jones, on the GOP ticket for Illinois’s 3rd Congressional District, is a former leader of the American Nazi Party and an open Holocaust denier. Steve King, the incumbent in Iowa’s 4th Congressional District, has retweeted neo-Nazis, defended white supremacists and received praise from David Duke and Richard Spencer. Paul Nehlen, running for Wisconsin’s 1st Congressional District, kept a list of Jewish foes on Twitter and went on a Twitter rant about “Jewish media.” Russell Walker, candidate for North Carolina’s State House District 48, once said that “God is a racist and a white supremacist,” and that Jews are descendants of Satan. Every one of these Nazi-sympathizers is a bigger threat to the Jews than a tweet about Gaza. And every tweet the RJC wastes on Ocasio-Cortez is one tweet they aren’t spending on their own party kicking out Nazis.

It’s true that the GOP has been steadily denouncing these candidates, just as Ocasio-Cortez denounced Lopez-Pierre. And yet, Lopez-Pierre is hardly as big a threat as someone who’s actually won a primary and on the ballot.

It behooves the left to call her out, and Estrada’s despicable comments should preclude her from holding office. But it’s undeniable that just as there is a socialist wave passing through the left, there is a neo-Nazi wave taking hold in the right, no doubt emboldened by Donald Trump’s empathy for their cause.

That’s where RJC’s efforts should be – in denouncing those who explicitly wish harm on Jews.

Instead, just yesterday, the RJC had another tweet about Ocasio-Cortez:

Jewish Democrats contend with a wave of progressives who criticize Israel https://t.co/V4cgJrdfkF pic.twitter.com/NDbEQpyu79

I have my own concerns with Ocasi-Cortez’s platform, which seems a bit light to me on the issues I care most about. But to suggest that she is an anti-Semite, or that she is bad for the Jews or Israel, is not only an unjust smear but actually cheapens those crying foul against her, doubly so when so many Nazis and Nazi sympathizers are on the GOP ticket.

Let’s focus our energies on fighting the actual evil in our midst.

No, Alexandria Ocasio-Cortez Is Not Bad For The Jews. But 9 GOP Candidates Are