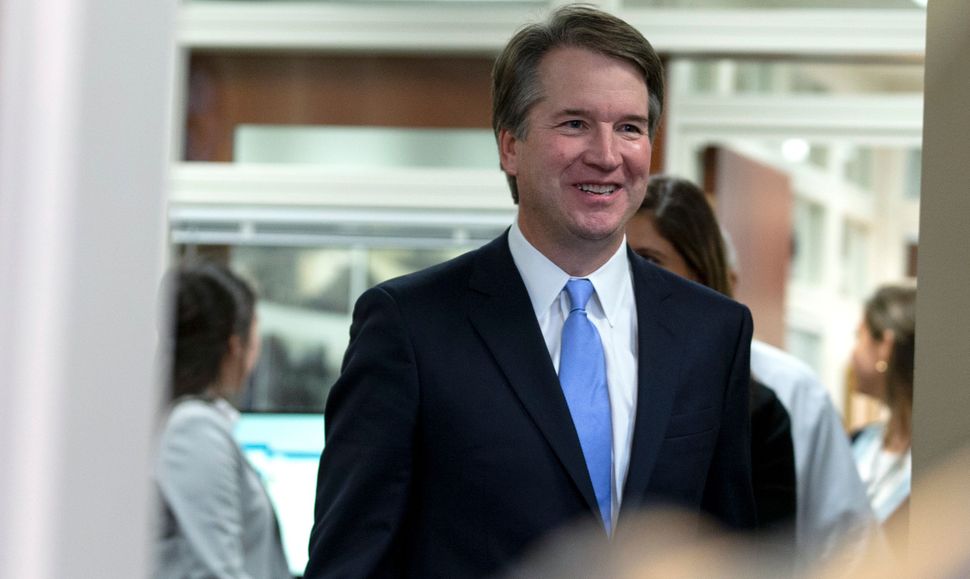 Trump’s presidency has lived up to his campaign rhetoric by implementing a racist, anti-immigrant, and anti-Muslim agenda. His disgraceful policy of separating immigrant families is just his most recent practice that echoes the worst moments of American history and actions of foreign dictators.

In theory, Congress should be serving as a check on any would-be dictator in the White House. But given the Republican Party’s total failure to stand up to Trump, in fact their thorough embrace and enabling of authoritarian tendencies, that task has fallen solely to the courts over the course of this administration. Now, with Trump’s nomination of Judge Brett Kavanaugh to the Supreme Court, this last bastion of institutional accountability over the president is in even greater danger of slipping away.

Jewish Americans must fervently oppose the confirmation of Judge Kavanaugh. On issues of religious freedom, reproductive rights, voting rights, economic justice, and a host of other issues, Kavanaugh has shown fierce hostility to the priorities and values of an overwhelming majority of our community.

But it’s not just Kavanaugh’s positions on the issues that are alarming. Putting Kavanaugh on the Supreme Court means losing a crucial check on the power of a president who has made white nationalism a central tenet of his worldview and policy agenda. Anyone in the Jewish community making the mistake of embracing, or even tolerating, a white nationalist administration, is making a devil’s bargain, and the price is either our safety or our conscience.

A Supreme Court majority shaped by Donald Trump means that the most vulnerable among us — immigrants, women, Muslim Americans, people of color, LGBTQ Americans, and yes, Jews too — will be at even greater risk of harm from Trump’s agenda, untethered from true oversight by either of the other branches of government.

Perhaps most egregious and dangerous of all, Kavanaugh has espoused a frightening belief that the president is essentially above the law.

In a 2009 Minnesota Law Review article, Kavanaugh expressed the belief that a president should be immune from “civil suits, criminal investigations, or criminal prosecutions” during their time in office. And in 1998, Kavanaugh wrote, “Congress should give back to the President the full power to act when he believes that a particular independent counsel is ‘out to get him.’”

Experts have rightly noted Kavanaugh’s views on this topic primarily for their relevance to the Mueller investigation, but they also have wide-reaching implications for positions Kavanaugh might take on the rest of the Trump agenda.

Already, the Supreme Court has upheld Trump’s Muslim Ban, a disastrous, damaging policy born entirely out of the president’s hatred of Muslims. With a Justice Kavanaugh on the Court, what other outrageous Trump policies might it turn a blind eye to?

If a Justice who has already expressed a dangerously expansive view of executive power is confirmed to fill the current vacancy, Trump will likely feel even more emboldened to take his radical agenda and authoritarian tendencies further. Even if the Court does rein Trump in every now and then, Kavanaugh’s confirmation would vastly expand the president’s ability to actualize his radical worldview. This is another step in the slow erosion of democratic institutions and norms.

Jews know all too well about the horrific consequences when a leader with dictatorial aspirations is able to seize control over institutions designed to hold him accountable. We have seen this before.

Since the day he announced his presidential candidacy, Jewish Americans have warned of Donald Trump’s authoritarian tendencies: his racist and xenophobic exploitation of Americans’ worst fears of the ‘other,’ his attacks on the free press, and his dictatorial, ”I alone can fix it” mindset.

Despite Republican control of the Senate, we are not powerless, and this fight is far from lost. We must urge Senators to ensure that Kavanaugh’s record on executive power, along with his record on issues at the core of our basic rights and freedoms, is thoroughly examined during his confirmation hearings so that the American people can be made fully aware of them. Then, we must demand that the Senate reject this disastrous nomination.

By every measure, Judge Kavanaugh’s judicial philosophy is antithetical to that of the American Jewish community. All of us who treasure our democracy and freedom, and who fight against oppression, must work vigorously to defeat his nomination. We must ensure that any future Supreme Court justice has a judicial record in alignment with our values and with the checks and balances of the Constitution.

Stosh Cotler is the CEO of Bend the Arc: Jewish Action.