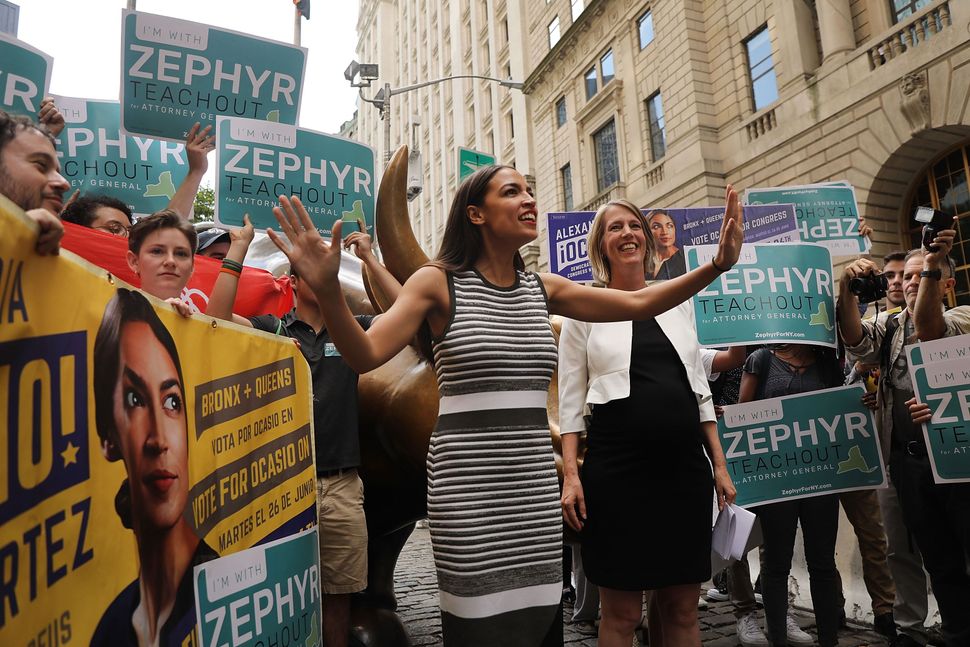 Alexandria Ocasio-Cortez’s surprise win over 10-term Rep. Joe Crowley in a congressional primary in New York provoked a predictable response from the right.

It wasn’t just her avowedly socialist views. Since the day of her victory, the Republican Jewish Coalition has been trying to smear the candidate as bad for the Jews, thanks to a tweet during the Gaza March of Return protest over the summer:

But as of today, Ocasio-Cortez has inspired ire from the opposite side of the aisle: the far left, who once championed her.

Her crime? Stating that she supports Israel’s right to exist.

On Friday night, PBS aired an interview with Ocasio-Cortez. The interview was half an hour long, and touched on many of the candidate’s policy issues like free college and free healthcare.

None of this made news on Monday morning Twitter, though. Instead, an unflattering clip of the candidate struggling to explain her thoughts about Israel quickly went viral.

The right immediately pounced, doubling down on its initial pronouncement of Ocasio-Cortez as dangerous and anti-Israel. She was now dangerous, anti-Israel, and ignorant, too.

But the clip did a disservice to the candidate, who explained her views about Israel in greater detail, and was honest about her desire to learn more and evolve.

Crucially, while Ocasio-Cortez stood strong on the question of Palestinian human rights, she also insisted on something else.

“I believe absolutely in Israel’s right to exist,” Ocasio-Cortez said. “I’m a proponent of the two state solution. For me, this is not a referendum on the state of Israel.”

Her view that Israel has a right to exist but its occupation of the Palestinians is wrong and should be denounced is not only reasonable; it’s the very position that the majority of American Jews take on Israel.

This was not enough, however, to stop the criticism from the political right.

“Alexandria Ocasio-Cortez bashes Israel while admitting she is clueless about what is going on there,” tweeted the RJC. “She simply toes the far-left, radical agenda.”

More surprising than the hypocrisy of the RJC, which has yet to condemn all of the nine white supremacists and Nazi sympathizers running for office on the GOP ticket, is the fact that Ocasio-Cortez’s comments about Israel have brought her scorn from erstwhile friends on the left.

Corey Robin, writing in Jacobin, described a bitter fight on his Facebook page about the interview, with one side taking Ocasio-Cortez’s comments as “confirmation that she is no real leftist, that she is turning right, that she’s been absorbed into the Democratic Party machine, that she’s a fake, a phony, and a fraud.” (The other side pleaded her youth, and that she had been set up.)

A tweet from the anti-Israel site Mondoweiss accused Ocasio-Cortez of having “all but apologized” for her earlier remarks about the massacre in Gaza:

Rising Democratic star @Ocasio2018, soon to go to Congress from NY, all but apologized for using words massacre and occupation about Israel, saying she spoke as an activist, and she is no expert on the Middle East and is willing to learn and evolve. https://t.co/pDfwwf4yG9 pic.twitter.com/MnFJA6E9r8

The tweet was picked up by others expressing dismay that their star candidate did not toe the party line on the Israeli-Palestinian conflict:

Ocasio-Cortez is a member of the Democratic Socialists of America, who helped get her elected and endorsed her candidacy. But the DSA has also endorsed the boycott, divestment and sanctions movement against Israel.

And after Ocasio-Cortez’s comments about Israel this weekend, one person even suggested that the DSA put out an official statement criticizing her.

Robin ends his piece hopefully, confident that the same DSA activists who got Ocasio-Cortez through her primary in the first place “are talking to her now about getting a better line on this.”

The implication seems clear: Woe is to Ocasio-Cortez if Robin is wrong, if opposing the occupation but insisting on Israel’s right to exist are exactly where she wants to be politically.

Israel has long been the third rail of American politics. The right will oppose anyone who dares speak up against the occupation, even if they do so from a place where they acknowledge Israel’s right to exist. And the far left will oppose anyone who dares acknowledge Israel has a right to exist, even if they are committed to solving Israel’s civil rights abuses against the Palestinians.

Usually in opposition to one another, the bigotries of both the far left and the right have converged on the young socialist candidate.

It’s a shame. But it’s one we know all too well. Like her views on Israel, being a target for the left and the right is now one more thing Ocasio-Cortez has in common with the Jews. I hope as she learns more about the Israeli-Palestinian conflict, she is able to find the right voices on both sides of the conflict to guide her. There are certainly enough people on both sides who wish her to fail.

Correction: An earlier draft of this article said that the RJC had not condemned the white nationalists and nazi-sympathizers running for office. They have condemned a few of them. We regret the error.