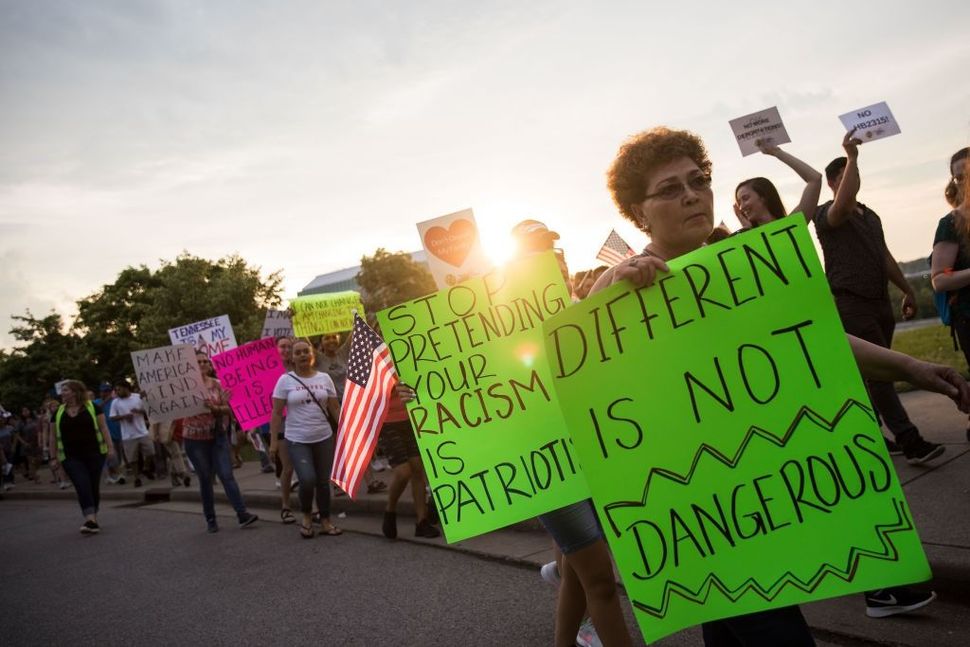 Immigrant families and activists march during a rally outside the Tennessee State Capitol against HB 2315, a bill passed as law that will prohibit sanctuary city policies in the state, on May 31, 2018 in Nashville, Tennessee. (Photo by Drew Angerer/Getty Images) Image by Getty Images

In the early days of the Trump administration, I wrote an essay expressing serious reservations about the modest but growing movement by churches and synagogues to offer aid and housing to undocumented immigrants.

Since then, America has changed, and so have I.

My initial unease was not because of what “sanctuary” tries to do, I wrote at the time. There is a long and powerful tradition of biblical teachings exhorting us as Jews to remember the stranger, care for the vulnerable, and bestow forgiveness and compassion on those who may have erred for a good reason.

No, it was because of what sanctuary represents — a further politicization of religious life. “While I appreciate and even admire the moral compulsion of synagogues willing to go so far as to break the law in this particular case, what about others?” I asked. “What about the houses of worship that have politics I don’t agree with — the ones that exhibit an equal moral passion to, in their words, protect the unborn? Or resist accommodating trans people? Or same-sex marriage?”

I was worried that the 700 or so houses of worship which had signed on to the movement in early 2017 were offering to break the law without a specific policy remedy in mind, thereby harming their ability to effect deeper change by handing detractors a simplistic rallying cry: Law and order! Respect the system! Protect real Americans!

I still harbor those concerns. But more than a year later, I am in a different place because this nation is in a different place. I could never imagine then that thousands of children would be torn from their parents and dispersed throughout the country, pawns in a cynical political game supposedly devised to deter illegal immigration, but actually intended to do grievous harm.

I could never imagine that the top law enforcement official in the country would misquote the Bible to defend this depravity.

Perhaps I was naive. But I see now that when the state acts this cruelly to families fleeing hardship, violence and persecution — even if the families are breaking the law by seeking refuge — and when the political power structure abets this cruelty, taking no steps to end it, then faith communities must fill the moral breach.

Since Donald Trump became president, the Sanctuary Movement has grown substantially: More than 1,100 houses of worship have joined, in 40 networks and coalitions. Thirty-six people are in public sanctuary in 26 cities — among them, a mother and child in a church just a block from my home.

Unfortunately, while faith leaders across denominations have decried the administration’s vengeful policy, one group remains steadfastly behind it: white evangelical Christians. It is true that a few of their leaders bravely criticized the president. But others refused to do so, and the rank-and-file continues to provide Trump with the core support and sheen of religiosity that he craves and needs.

More than any other religious group, white evangelicals favor “substantially expanding” the wall along the U.S. border to Mexico, according to a Pew Research Center survey released June 18. Much more, in fact: At 70%, evangelical opinion was 20 points higher than white mainline Protestants and Catholics and 50 points higher than African Americans. (Jews were not specified in this survey.)

As Amelia Thomson-DeVeaux noted on the website FiveThirtyEight, other polling showed that white evangelical Protestants were the only religious group in which a majority (57%) said they’re bothered when they encounter immigrants who don’t speak English. They are also the likeliest to say that they have little or nothing in common with immigrants.

This social anxiety and racially tinged negativity is channeled through the all-purpose nod toward “law and order.” You hear this rhetoric time and again, from administration officials to preachers to pundits to ordinary folk.

It even precedes the Trump era. A 2015 survey by LifeWay Research found that 72% of evangelicals believed immigration reform should protect the unity of the family. But far more, 88%, said it should “respect the rule of law.”

This is what I find so disingenuous. So unfaithlike.

The implication that those who favor a moral immigration policy are anarchists seeking only chaos at the border is tweeted regularly by the president. And it’s ridiculous. Some hothead protesters are calling for the abolition of U.S. Immigration and Customs Enforcement, but most Americans opposed to Trump’s policies and rhetoric on immigration — and that is most Americans — recognize that there are cheaper, more efficient, and more humane ways of protecting the border and deciding who really deserves to be here.

Monitoring programs, for example. A 2014 government report found that an ICE monitoring program cost $10.50 per person per day, while the comparable cost for detention was $158, Margaret Talbot wrote recently in The New Yorker. And it works: Ninety-five percent of asylum-seekers in that program between 2011 and 2013 showed up for their proceedings.

An obsession with “law and order” has long been code in American history for restricting legal entry of undesirables, be they Chinese and other Asians in the late 19th century, Jews and other Eastern Europeans in the 1920s, and so on. No wonder Jews and other immigrant communities view this political slogan as a convenient cover for deeper prejudices and anxieties.

That is why I am no longer reluctant to endorse civil disobedience when extreme measures are called for to counteract even more extreme government edicts. Because in the end, laws must be moral. They must strive to preserve the dignity of every human being, regardless of race, birthplace, faith, economic class and political belief.

Religious communities have an obligation to act as the conscience of this nation, not as apologists for immoral policies that violate the very faith-based values they profess to hold.

Jane Eisner is the Forward’s editor-in-chief. Contact her at [email protected].