What Julia Salazar’s Jewish Identity Taught Me About My Own 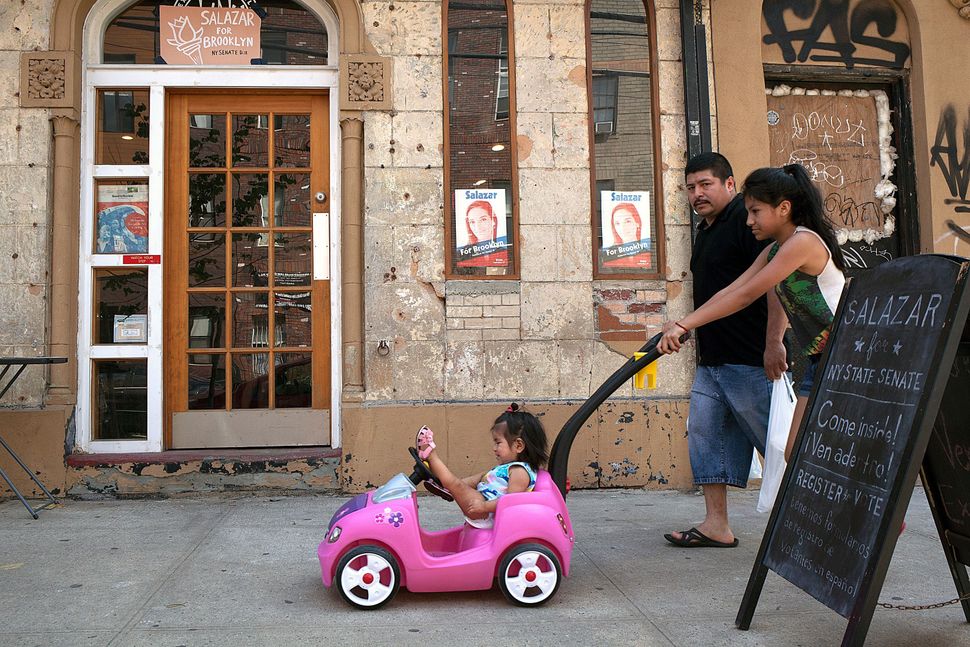 When I first learned about the personal biography of Julia Salazar, a candidate for New York State Senate, I felt a glimmer of recognition — and that was after reading an article in Tablet Magazine calling into question her Jewish parentage.

Her family narrative sounded completely plausible to me. Like the story Salazar tells of her family history, members of my family emigrated to Colombia from British Mandate Palestine. Unlike Salazar’s account, my father was raised in the Colombian Jewish community. As a young adult, he came to the U.S. where he met my American-Ashkenazi mother.

As far as I know, this story is true. I have the receipts, official documents and old photos to prove it.

But I also know that family history can be murky and sometimes built on wishful lies.

On my coffee table there is a red, cloth-bound book. It was a gift from my cousin, the author Raphael Benghiat. The title of the book is “Our Israel and Capaluto Family Heritage,” and it appears in both Hebrew and English in gilt lettering.

The book, which is my family’s lore of where we come from, contains photos of 18th century gravestones in Rhodes and 19th century family letters in Ladino. There are pages of names, and lists of dates of birth, marriages, and deaths.

Among my direct ancestors, according to the book, are such illustrious figures as Rabbi Eliyahu Israel, Chief Rabbi of Alexandria and Grand-Rabbi of Cairo from 1772-1784. There are three Chief Rabbis of Rhodes.

Or are they my ancestors? Early on in the book there appears a small disclaimer: “What we know is by oral transfer from our mothers and no formal documentation to back our claim exists. Our family history and recollection is that [the author’s] maternal grandmother… was a direct scion of the Israel rabbinical family.”

As my cousin freely admits, there is no physical evidence that those illustrious Chief Rabbis are my family’s ancestors. The bond that ties me to them is a thin thread of family dreamlore, albeit lovingly spun and passed down from generation to generation.

“Don’t you know,” I remember an elderly cousin telling me, “that you are the descendent of great rabbis?”

Really though, I am only sort-of, maybe the descendant of great rabbis. In terms of actual documentary evidence, my family tree can only be traced to the 19th century and some, frankly, less-accomplished people.

And yet, I grew up believing that something in my bones made me the inheritor of greatness.

Genealogical research and family story-telling are not the same thing. Today we are in the midst of a popular craze of genealogy. Advances in technology make it easy for amateurs to find distant cousins and unearth buried pasts. Watching people have their family story disrupted on TV is a form of entertainment.

But personal narrative is often aspirational, the filtered selfie of story-telling.

Pushing at the boundaries of who we are, to bring the tale in better line with who we would like to be, is part of the project of modern self-making.

And yet, personal narrative is not only about individual self-making. It’s also about interpersonal relationship-making and in-group community-making as well. It’s telling a story in a way that signals to whom we belong, what we are accountable for, and what we are entitled to.

Julia Salazar’s lies, about being an immigrant, about growing up poor, are lies, likely calculated to maximize the political currency that she believes such identities would accrue her. And she, like all who aspire to represent us in government, should be held accountable for lies.

But Julia Salazar’s story about her Jewish identity tells us about who she believes her people are.

And the impulse to tell your family story in a way that stretches or even invents ties to people you admire, is one I can relate to.

Salazar’s fabrications not only edify us about the limits of identity politics in this cultural moment, but also about who we are as human beings, constructing family histories that weave together where we come from with where we want to be.

For Salazar’s story of Jewishness is not the same as, for example, white southerners who claim a Cherokee “princess” ancestor. Most contemporary Jewish communities allow for conversion. Being Jewish is an identity that an outsider can authentically join.

Moreover, fabricating a story that makes one part of a mythic Jewish family is woven into the conversion process. Converts to Judaism are called to the Torah as the child of Abraham and Sarah. That’s a tacit genealogical fib.

Most importantly, Salazar is known to be an active member of Jewish groups. She has been busy working to realize a version of a vibrant, moral Jewish worldview. You or I may not agree with that worldview, but she has been credibly affiliated with the Jewish community.

So go ahead and condemn Salazar for her lies about being an immigrant or growing up poor. But let’s lay off on the Jewish front. The bar for truth telling for public office should not be the same as for Jewish communal acceptance.

I may not be the descendant of the Grand Rabbi of Cairo, but I am the descendent of people who nurtured that possibility and passed that story down to me. I welcome Julia Salazar’s story and the stories of other newcomers to our Jewish communities.

Arielle Levites is the Golda Och Postdoctoral Fellow at the Jewish Theological Seminary. She holds a PhD from NYU.

What Julia Salazar’s Jewish Identity Taught Me About My Own