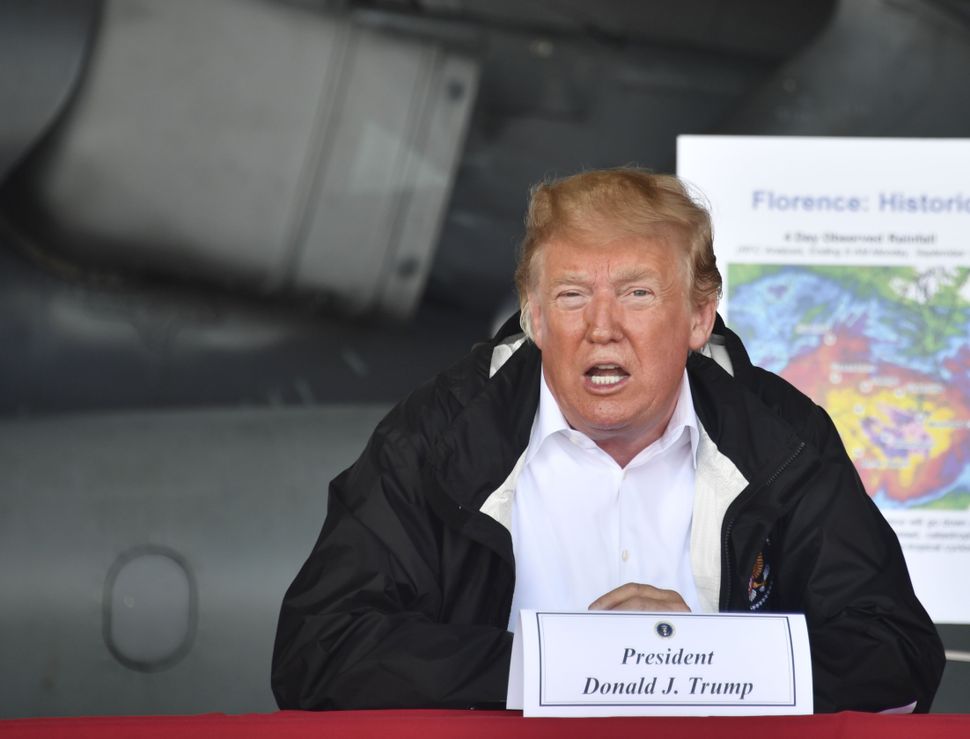 A rabbi at a typical Conservative synagogue in a typical American suburb in the New York area recently told me an enlightening story. He got the job about a year ago, coming to the U.S. from Israel, and in his first Shabbat sermon, he waxed poetic about the importance of Israel to the American Jewish community.

The congregation loved it. One by one, they congratulated him on his fine sermon over kiddush. Rabbi and flock were mutually pleased with his appointment.

The following week, he thought to build on that success, and instead of speaking about Israel, he decided he’d speak about the most pro-Israel American he knew: Donald Trump.

When the time came to give the sermon, he stepped up to the pulpit and launched into 15 minutes of praise for the greatest friend to Israel the United States had ever produced.

When he finished, there was a kind of stunned silence. The congregation was furious, and for a few days after, the rabbi was certain he would lose his post.

But he was also shocked, and very confused. He told me he simply could not understand how you could be pro-Israel but not pro-Trump.

President Trump has been so good to Israel, he reasoned. He moved the embassy to Jerusalem, flouting generations of American anti-Israel cowardice! He withdrew from the Iran nuclear deal! There’s zero pressure not to build settlements! Trump and Israeli Prime Minister Benjamin Netanyahu are locked in a bromance for the ages! Trump is more popular in Israel than he is in the U.S.!

These things are all true. And yet, far from pleasing the American Jewish community, the age of Trump has produced great pathos instead. Thanks to their extreme distaste for Trump, American Jews are not able to enjoy the fruits of his labors, even those that would have given them great pleasure under any other auspices.

Their antipathy for their president has made the friend of their friend their enemy.

That the majority of American Jews have no love lost for Trump has been well established. Hillary Clinton got 71% of the Jewish vote, while Trump got just 24%.

As with the U.S. population overall, Jews who voted for Trump really like him, while those who voted against him really, really don’t.

To the majority of American Jews, three-quarters of whom have voted Democratic since 1968, Trump’s anti-immigration policies coupled with his insensitive and often racist remarks have made him anathema.

Trump’s closeness to Netanyahu has likewise provided further consternation, rather than comfort, to liberal American Jews, for Trump has enabled Netanyahu’s tendency towards illiberalism. Last year, Netanyahu scuttled a deal that would have allowed liberal American Jews to hold egalitarian services at the Kotel. Trump has also provided fertile grounds for things like increased settlement building and a recent “Nation State bill” that offended all of Israel’s minorities as well as many Diaspora Jews. Like Trump, Netanyahu finds his support among the Orthodox, and seems to have washed his hands of liberal Jews and their concerns for freedom of religion and democratic values.

But even Orthodox Jews, them majority of whom voted for Trump, did not overwhelmingly vote for him. Just over half of Orthodox Jews – 54% — voted for the president. Orthodox Shabbat meals are probably one of the few places left in America where pro-Trump and anti-Trump folks engage in political debate (though since the election, his approval ratings in that community have skyrocketed).

For Jews who oppose Trump, there is a tragedy to his win, not despite everything he has done for Israel, but because of it. For these millions of Jews, Trump was not just someone they didn’t want to see lead. He was someone they didn’t want to see lead who forged a deep connection with Israel, the land of their people, a place that is precious to them.

There’s a deep pathos to this. For many American Jews, the stain of the President, who is otherwise so anathema to their values, has spread to everything he touches, including things they longed for, like moving the embassy to Jerusalem, or exiting the Iran deal.

And Trump has noticed. As Ron Kampeas reported in JTA, the Jewish Public Policy Institute report on the Israel-Diaspora relationship noted “the growing frustration within the Trump administration that the president’s pro-Israel moves (especially the transfer of the embassy to Jerusalem) are not sufficiently appreciated by large segments of the American Jewish community.”

Most recently, this taint has spread to the donor class. Charles Bronfman, one of the mega-donors behind Taglit-Birthright Israel, and Ronald Lauder, an erstwhile supporter of Netanyahu, wrote scathing op-eds excoriating Israel’s treatment of non-Orthodox Jews and Palestinians.

But last week, it was Trump that led two more Jewish mega-donors to switch party affiliation: Seth Klarman, a billionaire and owner of The Times of Israel, and Les Wexner, chairman and CEO of the parent company of Victoria’s Secret and Bath and Body Works.

Both Klarman and Wexner have contributed millions to Republican candidates in recent years. No longer. Klarman estimates that by the next election, he will have spent $20 million on Democratic candidates.

Of course, leaving the Republican Party is hardly leaving Israel. But it does mean that these billionaires will not be putting their money in what many view as the most pro-Israel administration the U.S. has seen in generations. As Kampeas put it, “Even a hawkish pro-Israel agenda, they seemed to signal, doesn’t justify the damage they feel Trump is doing to America and its democratic institutions.”

And in an age when Senator Bernie Sanders is taking Israel to task over Gaza, presumptive congresswoman Alexandria Ocasio Cortez won’t commit to a two-state solution, and newly elected congresswoman Rashida Tlaib is pushing for withdrawing aid, the Democratic party is increasingly willing to criticize the Israel government and hold it to account.

It’s this party that American Jewish billionaires are flocking to and bringing their money — thanks to Trump.

Klarman even praised Ocasio-Cortez in an interview with The New York Times. “In a lot of ways I’m actually excited about somebody like Alexandria Ocasio-Cortez coming along because it’s a way of younger people and people of color and people who are different finding their voice and being part of the process,” he said.

Of course, Sheldon Adelson, who is reported to have negotiated moving the embassy to Jerusalem with a $20 million campaign contribution to Trump, remains steadfast in his support.

But the tally of billionaires who have abandoned the Republican Party, and its unconditional support for Israel, is growing.

Norman Podhoretz once called Israel “the religion of American Jews.” In houses of worship across the country and among some of America’s richest Jews, apostasy is now in vogue.

And as for the rabbi in that typical Conservative synagogue in that typical American suburb, he and his congregation decided that preaching politics was not his mandate, and his spiritual guidance has flourished ever since.