In Search of a Political Prophet, I May Have Found One 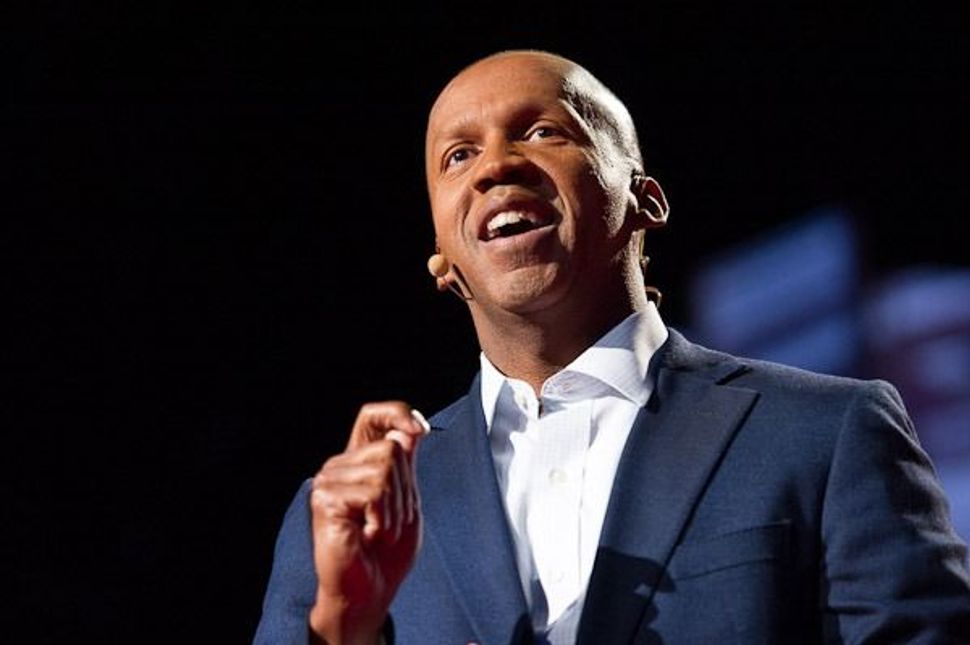 My latest essay, appearing in our October magazine and online last week, wondered why we aren’t seeing moral leadership from Jews in Washington, speaking out against the corruption and turpitude disgracing our national politics. Where are today’s Elie Wiesels, Joe Liebermans, Gabby Giffords? Where are today’s political prophets?

And then, just as it seemed that our politics had reached another low, I heard a remarkable prophetic voice — not from a Jew but from an African-American man, descendant of slaves, who reminded us of the kind of blinding, uncomfortable truths that prophets once preached about in biblical times.

But he did it with beguiling humor and the cadence of a master storyteller, which made his message all the more impossible to ignore.

Bryan Stevenson, founder of the Equal Justice Initiative and author of “Just Mercy,” appeared at B’nai Jeshurun on the Upper West Side last Wednesday under the auspices of the synagogue and the Marlene Meyerson JCC Manhattan. Nine hundred people jammed the sold-out space. It was like a revival meeting for the soul, delivered with the depth and erudition of a lawyer who I suspect has spent more time with prisoners on Death Row than any one else with two Harvard degrees.

I read Stevenson’s book a few years ago, and recognized some of the stories he told, but they took on larger significance in this retelling. He framed the dramatic increase in incarceration rates in historical context. 1972: 300,000 in American jails. Today: 2.3 million. The highest rate of incarceration in the world. And while this unconscionable situation mostly afflicts African American men, he said the number of women in prison has increased by 646% in 25 years.

I can’t begin to do justice to his hour-long talk, delivered without notes, skillfully structured to remind his listeners of four ways we can pursue positive change. The first is to get proximate to the poor and disenfranchised, to hear things you can’t hear from a distance, to humanize the forgotten and condemned.

Second, Stevenson urged us to recognize that we need to change the narrative that somehow America has dealt with its civil rights problem. “Slavery didn’t end in 1865, it just evolved,” he insisted. As a society, we have not yet confronted the legacy of terror that still afflicts people of color. We need our own truth and reconciliation process.

Third, and this is hard — stay hopeful. “Hopelessness is the enemy of justice. Hope is at the beginning of how we change things,” said the man who has seen poor, disabled prisoners he knows are wrongly convicted die at the hands of the state.

Lastly, he said that we have to do things that are uncomfortable and inconvenient, to move beyond our own spaces and ways of thinking to recognize that our country kills and harms broken people in our name. “The opposite of poverty is not wealth,” Stevenson said. “It’s justice.”

The challenge of hearing a prophet, of course, is struggling with what to do after your heart has been pierced by his message. I am still wrestling with my personal response. But I can use this platform to urge you to act on Stevenson’s message in whatever way seems right to you.

“I pray that his words will echo in our ears for years to come and make us accountable to them,” wrote BJ Rabbi Felicia Sol afterwards. Yes.

What else I’m reading. Nikki Haley’s announcement last week that she would resign from her lofty position as U.S. ambassador to the United Nations took most everyone by surprise. Our opinion editor, Batya Ungar-Sargon, jumped to the challenge of capturing the many diverse reactions to the news in the Jewish community and beyond.

Within just a few hours, Batya wrote her own essay looking at why Orthodox Jews have been so supportive of Haley, and collected opinion from a variety of viewpoints — from an Israeli woman who considered her a hero to a Palestinian man who argued why Haley’s tenure was so detrimental to his people — and more.

We are continuing to follow this important story. Meantime, there is the larger question of how the United Nations can do a far better job of its job — especially in protecting the vulnerable around the world. I found that this editor from Bloomberg providing a useful framework for what should happen going forward.

That is, if there is the political will in the U.S. and elsewhere to make genuine change.

Our Rising Star! The Forward’s life and features editor, Avital Chizhik-Goldschmidt, was honored last week as one of Folio magazine’s Rising Stars, individuals who are making their mark and disrupting the status quo in magazine journalism.

In accepting her award, Avital said that her work is dedicated to “telling stories of the silenced.” By doing so, she does the Forward proud.

Looking forward. I am traveling to Chicago on Thursday to moderate what should be a fascinating conversation between Peter Beinart and Bret Stephens, at the home of a generous Forward supporter. Then I will be meeting with other Forward readers at breakfast the next morning. No matter the weather, Chicago always gives us a very warm welcome!

In Search of a Political Prophet, I May Have Found One