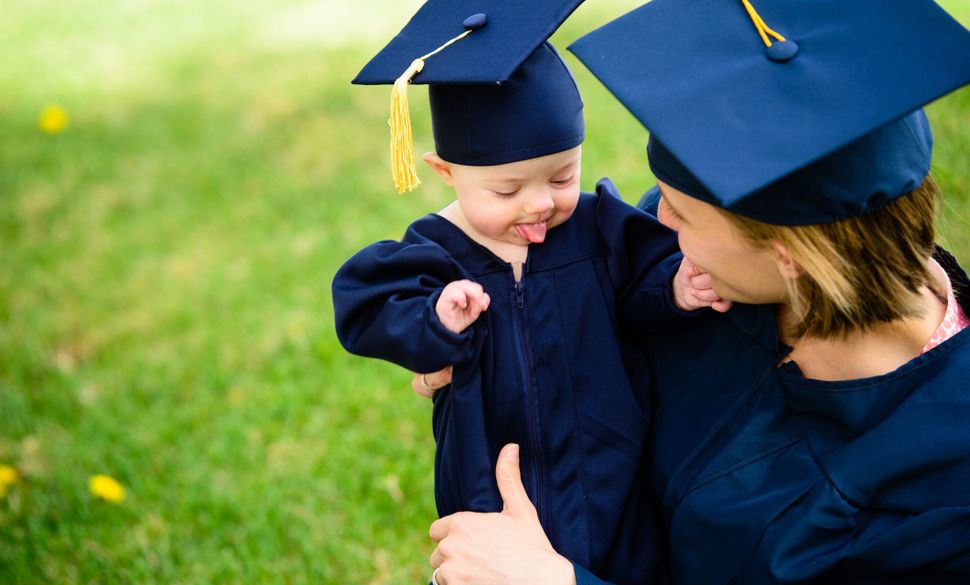 “I always say: ‘Present me the woman who decided, being perfectly educated, to have seven, eight, or nine children.’” — Emmanuel Macron, President of France

In a refreshing twist, the latest viral hashtag is an inspiring story about female empowerment and family.

From stay-at-home moms to doctors and teachers, these women take pride in both their education and their families. And well they should.

Each of us is the second of seven children. One of our mothers is a technology consultant at one of the “big five” U.S. consulting firms, while the other has a graduate biochemistry degree and works in one of the nation’s most prominent medical schools. She took off two decades to raise her children and then returned to the field and learned all the new technologies and techniques, while the other worked full time while raising her seven kids.

Not only are both our mothers “perfectly educated” by any standard to which the French president could subscribe, but their 14 children have 23 combined degrees, including law degrees from Harvard and Cornell and a Ph.D. from Princeton University.

One is working on his dissertation, and two others are in graduate school for law and library science. Three have rabbinic degrees, which, when our siblings graduate, will bring the collective total number to 29 between our moms’ 14 children.

More importantly, our mothers raised us and our siblings to be independent-minded and to follow our own paths.

The two of us — a journalist and a political consultant — are not exactly pursuing cookie-cutter career paths in the Jewish world. Our respective siblings include lawyers and teachers, but also a musician, a baker, and an historian.

Our mothers taught us to take pride in making our own choices and to find meaning in the lives we pursue.

Even more profoundly, they taught us that there can be great strength and fulfillment in the sacrifice and love that comes from raising children.

Today, our family get-togethers are loud, entertaining, and always filled with far too much good food. The rare family photo is an exercise in extra-human patience, not to mention wide-angle lenses, and sometimes, you can’t hear yourself think. But we always have someone to turn to, someone to borrow from, and we are blessed with 15 nieces and nephews.

We say this not to brag — we recognize that despite some challenges growing up, we have been very lucky to have wonderful, supportive families — but to note the absurdity of the French president’s patronizing, misinformed remarks.

Just because a woman decides that having many children is what’s right for her and for her family doesn’t mean she’s been forced to make that choice. Nor is it necessarily the case that moms who choose to have many children are any less intelligent, educated, or valuable as people. Any suggestion otherwise is much more revealing about the values of the person who articulates it than about the reality on the ground.

Macron’s statement is also offensive considering that many moms worldwide have chosen to have many children out of moral and religious conviction. Suggesting that women who crave large families out of a sense of deeply-felt religious conviction are dumb is parallel to a kind of Victorian set of values that we’d hoped was discarded for the annals of history more than a century ago.

It is true on a national level, of course, that lower maternal educational attainment levels are correlated with larger U.S. family sizes.

“While fertility drops somewhat with each additional level of education, the biggest fertility gap occurs between women who lack a high school diploma and those who have completed high school,” notes the Pew Research Center.

In 2014, the percentage of U.S. moms with advanced degrees who had four or more children was just eight percent. But the Pew data suggests that highly-educated moms are increasingly likely to have larger families.

Between 1994 and 2014, the percentage of moms with advanced degrees, aged 40 to 44, who have three or more children rose from 22% to 27%. “While the association of education and family size remains a strong one, in fact the educational ‘gap’ in fertility has narrowed in the past two decades, driven in part by increases in family size among the highly educated,” according to Pew.

This statistical correlation is equally present in the Jewish world: Those with the largest families may be less educated in the traditional sense, though their religious education may be extensive.

The problem here isn’t that the numbers are lying, but that the French president is teasing out provincial stereotypes that demean the choices and achievements many women (and their partners) make.

Macron issued a challenge, and women around the world rose to the occasion, presenting their stories as exceptions that ought to be celebrated and even encouraged. Kudos to all the people who are picking up the gauntlet Macron threw down.

Good for all of the “perfectly-educated” women who also try their best to be perfectly-good moms to their many children.

Macron made a foolish comment here, and we are proof of his ignorance.

Nachama Soloveichik is vice-president of ColdSpark, and Menachem Wecker is a freelance journalist. They are married and live in Washington, D.C.