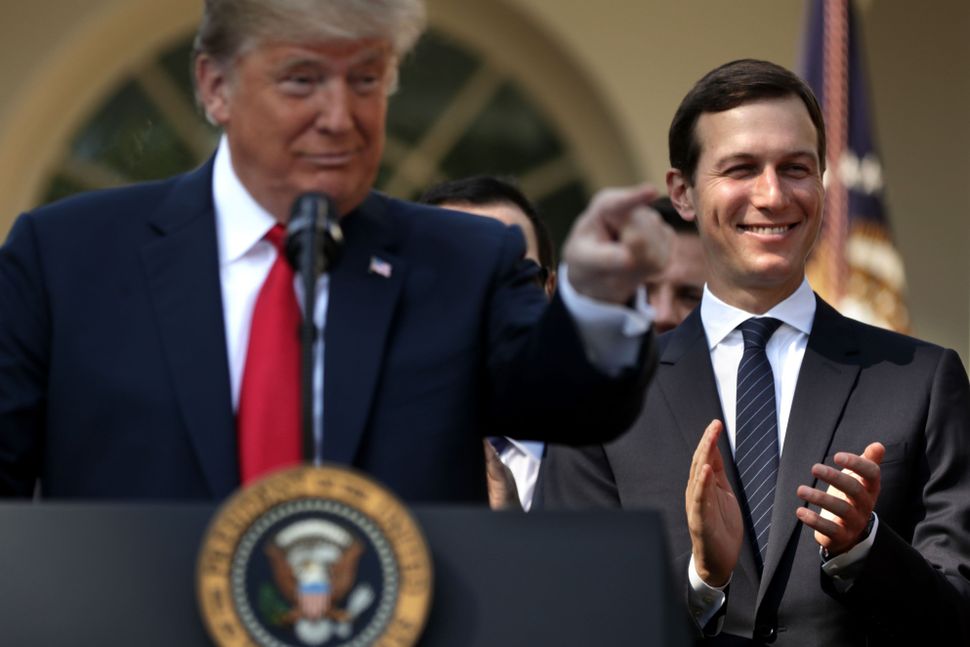 Almost everyone believes Mohammed bin Salman knew of, or directed, the gruesome murder and dismemberment of journalist Jamal Khashoggi at the Saudi consulate in Istanbul. But, The New York Times reports, bin Salman’s close ally Jared Kushner has been urging the president to stand by the Saudi Crown Prince.

Jared Kushner reportedly argued that the firestorm over journalist Jamal Khashoggi’s murder “will pass, just as it did after other Saudi errors like the kidnapping of the prime minister of Lebanon and the killing of a busload of children in Yemen.”

The quote appeared in an article in The New York Times which was later retracted after pushback.

And yet, the extreme and horrifying nihilism behind Kushner’s retracted quote rings true for anyone who watched him evolve from a real estate heir dabbling destructively in media into the poster child for the Trump era’s extreme capitalism, which has little patience for public service or a free press.

Trump and Kushner’s willingness to allow the Saudis to investigate their own suspected torture, slaughter and dismemberment of a Washington Post columnist is in keeping with the morality-free government the two have brought to the White House.

Kushner showed the same grim, obtuse nihilism in his treatment of the Palestinians. In defunding the Palestinians’ only safety net, UNRWA, Kushner callously argued that “sometimes you have to strategically risk breaking things,” and directed “an honest and sincere effort to disrupt UNRWA.” These pigheaded, destructive comments read like tech jargon cribbed from a middle-management guru’s presentation deck, lacking any trace of human recognition.

Unfortunately, Kushner’s geostrategy is as naive as one would expect from a novice on the world stage, a person who inherited wealth and bought things only to make less of them, never pausing for meaningful self-reflection.

In place of either experience or study, Kushner’s actions in the Middle East seem guided by his business interests—he supported the Saudi blockade of Qatar after Qatari investors declined to bail out his disastrous investment in his 666 Fifth Avenue flagship property—and by ideology. He showed a single-minded determination to rearrange US alliances for the benefit of Israel — especially the settler movement, which his family has long supported.

Indifferent to the destruction his narrow agenda might unleash in a volatile region, Kushner’s aims led him straight to bin Salman, a powerful proponent of the tacit Saudi-Israeli alliance, with whom he bonded.

Quickly, Kushner seemed joined at the hip with the aggressive young heir to the Saudi throne, touted by credulous columnists as a hip reformer but whose moves seem more like those of a bumbling ogre. His “errors” (if Kushner in fact used that word) were the kidnapping of the Lebanese prime minister and the killing of a busload of Yemeni children.

But one could add the mass detention and extortion of his cousins, spun dutifully by Western media as a crackdown on corruption, and the insane spat with Canada over its Tweeted criticism of bin Salman’s jailing of women’s rights activists.

The brash Saudi crown prince has been more aggressive than anyone else might be in trying to pressure Palestinians to accept Kushner’s Middle East peace plan, rumored to entail historic concessions that would remove refugee status from almost all Palestinians who currently hold it. To show they mean business, the Saudis have refused travel permits to Palestinians in Lebanon and Jordan holding refugee status, barring them from religious visits to Mecca.

And of course, bin Salman is the driving force, joined with the US and Israel, behind heightened confrontation with Iran.

So bin Salman’s is not the kind of friendship Kushner intends to spoil over something as minor as a columnist who was interrogated with a bone saw.

Shocking as it may seem, that amorality is consistent with many or most features of the Trump administration, and of Trump’s own business practices over four decades.

The nihilism of extreme capitalism underlies everything from the child lockups and Trump’s race-baiting night rallies and Tweets for political gain, to the graft and grifting of Scott Pruitt, Ryan Zinke and Steven Mnuchin, to the constant stream of brazen lies, gaslighting and misogynistic bullying flowing from the President and his staff.

Kushner’s inhuman disregard for a journalist’s brutal killing fits with Trump’s constant demonization of the press, and the discrediting of their truthfulness, seen by many as an ominous signpost on the road to fascism.

Similarly, Kushner’s unwillingness to see a Washington Post columnist’s torture and dismemberment as more than a bump in the road for his geopolitical aims was predictable. But it wouldn’t surprise anyone who has been watching Kushner since he purchased the New York Observer and transformed the iconic newspaper into mulch. Some who worked with Kushner, like Elizabeth Spiers (head of the agency I now work at and ex-editor in chief at The Observer—where I also worked) have reported Kushner’s complete disdain for journalistic conventions and the welfare of journalists as people.

The policy expressions of this moral bankruptcy by the entitled rich will be, long term, even more destructive. There’s the massive tax cut for the wealthy that amounts to generational robbery, and the blithe disregard for climate change that let the administration argue straight-faced for suspending fuel efficiency standards on the grounds that we’re already doomed. There was the blatant effort to sabotage the Affordable Care Act and finally, the installation of a credibly accused sexual predator on the US Supreme Court for life after a deliberately crippled FBI investigation.

That investigation, of Brett Kavanaugh, has widely noted echoes in the sham investigation into Khashoggi’s murder the Trump Administration has cheerfully entrusted to the Saudis, who are of course the main and only suspects. Secretary of State Mike Pompeo, on a cursory trip to Saudi Arabia clearly meant to provide cover, told reporters, “I don’t want to talk about any of the facts. They didn’t want to either.” Pompeo reportedly has heard the audiotape of Khashoggi’s torture and killing, but is buying time for the Saudi cover-up by denying it,.

The Saudis, reports The Times, “plan to assign blame to Maj. Gen. Ahmed al-Assiri, a high-ranking adviser to the crown prince.” It’s easy to draw parallels to the Republicans’ “Doppelganger” defense of Kavanaugh, where Republicans like Sen. Susan Collins insisted that the nominee’s accuser, Christine Blasey Ford, must have been assaulted by someone else.

And there we can see the real danger of Trump-Kushner’s style of amoral capitalism: their ability to leverage wide cooperation.

Just as all but one Republican Senator went along and voted to confirm Kavanaugh knowing full well the mirage of the hobbled FBI probe, the US foreign policy establishment has signed on to the fiction of bin Salman the reformer, despite the atrocities in Yemen, the torture or disappearance of several of his cousins, and his hyper-escalation of minor tiffs with allies.

If the murder of Khashoggi shakes loose their devotion to the Saudis, it will be something new.