The Left Is Redefining Foreign Policy. What Does It Mean For Israel? 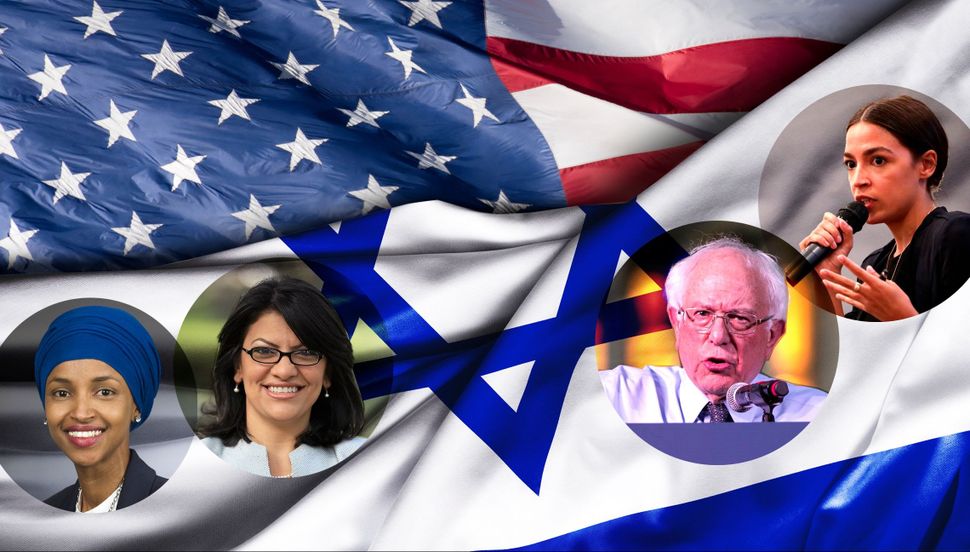 The youngest cohort of voters is pushing the Democratic Party left, inspiring mainstream political candidates to embrace policies once regarded as radical, including Medicare For All, abolishing ICE, and a $15 minimum wage.

But the conversation about what the emerging left’s foreign policy should be is only just beginning.

Bernie Sanders gave a speech earlier this month outlining his vision of a U.S. foreign policy that opposes oligarchy and authoritarianism worldwide. Other proposals have appeared in recent op-eds by Peter Beinart in The Atlantic, Katrina vanden Heuvel in The Washington Post, Daniel Bessner in The New York Times, and Sarah Jones in The New Republic, as well as on the left foreign policy blog Fellow Travelers (in which I am involved) and in my own writing for The Nation.

While left foreign policy is a very broad topic encompassing diverse and sometimes contradictory viewpoints, its proponents share an exasperation with the Beltway foreign policy consensus. This consensus can be summarized as a commitment to American exceptionalism and the right to intervene anywhere in the world in defense of whatever America deems to be its national interest.

American exceptionalism has always been a morally dubious proposition, and in the Trump era it is simply untenable, as no one can claim that America in 2018 is any kind of example to the world.

Left foreign policy is an attempt to break out of the disastrous assumptions that the most recent administrations have maintained about America’s international role.

And few assumptions have been more disastrous than the bipartisan consensus on unconditional support for Israel, regardless of its flagrant human rights abuses.

The Republican Party, which as recently as the George H.W. Bush administration included a realist wing that was sometimes openly critical of Israel, has become fully integrated with the Israeli right in the years since 9/11, as both have drifted further away from anything resembling liberal democratic values.

As for the Democrats, while many of them are personally offended by Benjamin Netanyahu’s contemptuous treatment of Barack Obama and warm embrace of Donald Trump, they are at best committed to the “pro-Israel, pro-peace” position espoused by J Street.

And some Democrats remain well to the right of J Street’s position, including Senate Minority Leader Chuck Schumer, who defied Obama by voting against the Iran nuclear deal in 2015 and who cited the Torah to claim an inalienable right to “our land” at this year’s AIPAC convention.

But even the liberal Democratic position, it’s fair to say, is out of touch both with liberal values and with the reality on the ground.

Emboldened by Trump, Netanyahu’s government has abandoned any remaining pretense that Israel is interested in a just peace with the Palestinians. And even before Trump, the far-right coalition that has kept Netanyahu in power since 2009 had steadily eroded Israel’s reputation as a progressive and secular state, which, while always questionable, was essential to maintaining the sympathy of liberal Jews in the Diaspora.

A reevaluation of the basic premises of the U.S.-Israel relationship is long overdue.

Meanwhile, if there is one foreign policy issue that broadly unites the emerging left while alienating it from the mainstream, it is Israel.

For instance, at last year’s Democratic Socialists of America (DSA) national convention in Chicago, a motion in favor of the Boycott, Divestment, Sanctions (BDS) movement passed with over 90% support, a rare point of unity for an organization prone to internal debates.

The two most prominent socialist politicians in the country, Bernie Sanders and Alexandria Ocasio-Cortez, haven’t publicly endorsed BDS (Sanders has in fact criticized the tactic), but both have voiced sentiments well to the left of the Democratic mainstream; Sanders notably called attention to the human rights of Palestinians during a 2016 debate with Hillary Clinton.

Rashida Tlaib, a Palestinian-American DSA member from Detroit who will be elected to Congress next month (she is running unopposed), has gone further, endorsing a one-state solution and voicing support for BDS activists, if not for BDS itself. And Ilhan Omar, a Somali-American democratic socialist from Minneapolis who is also likely to win a seat in Congress, has referred to Israel as an “apartheid regime.”

But so far, these politicians are the exceptions on the national stage. Even as polls show the younger generation of American Jews is increasingly skeptical of Israel, and even as left criticisms of Israel have become steadily more prominent in the U.S. media over the past several years, in Washington there is an ironclad bipartisan consensus in favor of a special relationship with the Jewish state.

While some maintain that this consensus is rooted in shared values or critical strategic interests, many on the left would point to the powerful influence of the pro-Israel lobby, the lack of any countervailing lobby, and the immense clout of right-wing Jewish and Evangelical donors.

The lowest-hanging fruit is not BDS, which will ultimately succeed or fail as a mass movement, nor the divisive question of whether a two-state or a one-state solution is preferable as a long-term goal. Everyone on the left should be able to unite right now on two essential points: Israel is not entitled to over $3 billion in annual U.S. military aid, and neither is it entitled to the protection offered by a guaranteed U.S. veto of UN Security Council resolutions condemning Israeli policies.

As long as Israel violates both international law and the official position of the U.S. State Department by maintaining any settlements in any part of the West Bank, it should be treated not as a friendly ally engaged in some unhelpful behavior, but as a rogue state violating basic human rights on an ongoing basis.

Either would send an unambiguous message that the U.S. will no longer enable Israel’s colonial project in the West Bank or the blockade strangling Gaza’s economy.

Likewise, the U.S. should stop supporting the brutal military junta that runs Egypt, which receives more aid than any country except for Israel and U.S.-occupied Afghanistan and Iraq.

The U.S. has showered Egypt and Israel with security assistance since the 1978 Camp David Accords, and this money has been used to back both Israel’s occupation and Egypt’s corrupt dictatorship in order to suppress any hope of an independent Palestinian state.

Israel has likewise developed close security relationships with U.S.-allied dictatorships in Jordan, Saudi Arabia, and elsewhere in the region; “the only democracy in the Middle East” seems determined to keep it that way.

But cutting off aid doesn’t mean washing our hands of the Israeli-Palestinian conflict, given both America’s responsibility for the mess it has made and many Americans’ cultural and personal ties to the region. A left-leaning U.S. government should support and empower civil society groups across borders to work for peace and human rights. In particular, it should commit to assisting the Palestinians in both Gaza and the West Bank in rebuilding the basic infrastructure that decades of occupation and violence have destroyed.

Of course, simply proposing all of this won’t make it happen overnight; in all likelihood, any politician who does so will face ferocious opposition in the media and on Capitol Hill.

But the left has an opportunity to reset the terms of the national debate on Israel by introducing moral clarity, something the Democratic Party has lost in its attempt to have it both ways.

Pretending that the peace process is a live concern has allowed a generation of policymakers to avoid confronting Israel’s illiberal drift. For years, politicians from Jimmy Carter to Ehud Olmert have warned that Israel risks becoming an apartheid state, but the truth is it has operated as one for decades, while maintaining the thinnest facade of pursuing a two-state solution. And for years, Democrats have ignored the fundamental contradiction between the humane progressive values they espouse and their unshakeable commitment to the Jewish State.

But Democrats aren’t fooling anyone anymore. The Israeli government understands that Republicans, who don’t even pretend to care about peace, make better allies, while the younger generation of leftists understands that the peace process has been dead for a long time, if it was ever alive at all.

Ending America’s special relationship with Israel won’t necessarily be a popular position, but it is an honest and transparent position, and voters respect politicians who say what they mean and aren’t afraid to describe the world as they see it.

Left-wing politicians have excited young voters by offering straightforward policies on domestic issues like health care and education, and by articulating clear moral truths like Black Lives Matter. Democratic policymakers like to hide behind complexity, but sometimes the problems we face are simple.

In the case of Israel, the problem is the occupation, and the solution is to stop supporting it.

David Klion is a writer in Brooklyn whose work has appeared in The Nation, The New York Times, the Guardian, Jewish Currents and other publications. Follow him on Twitter, @DavidKlion.

The Left Is Redefining Foreign Policy. What Does It Mean For Israel?