Thank You, Alyssa Milano, For Standing Up To Hate In The Women’s March 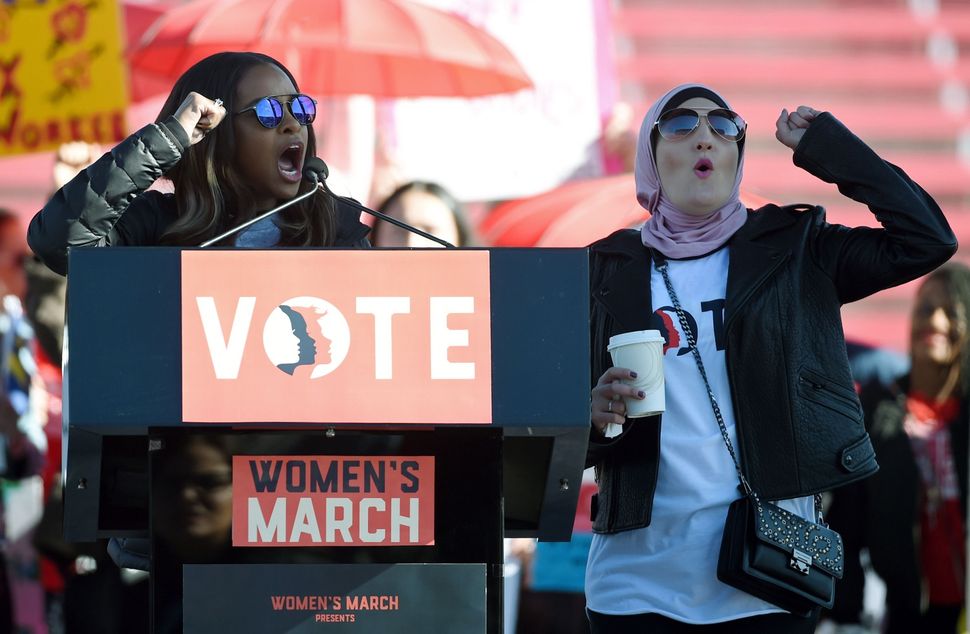 When the actress and activist Alyssa Milano announced yesterday that she would not be speaking at the Women’s March until its leaders condemn Louis Farrakhan, I cried.

Alyssa Milano says she will not speak at the next Women’s March as long as Linda Sarsour and Tamika Mallory remain a part of the leadership and refuse to condemn Louis Farrakhan’s anti-semitism. https://t.co/GvrrZ5fyPy

I cried because it was the first time a major figure stood up and recognized what we Jewish women have been through — the systematic dismissal, gaslighting, and abuse we’ve suffered at the hands of the Women’s March.

It’s been two years since the original, historic Women’s March, that event which had Jewish American women go from planning to celebrate the inauguration of the first female President to fighting for a place in American feminism in the blink of an eye.

From the get go, we were not welcomed in the Women’s March’s definition of those who needed to be protected from oppression. When we raised our voices about our exclusion, we were ignored.

While our friends sang of their feelings of empowerment, we had a queasy feeling in our chests.

But it was only the beginning. Next came Women’s March leader Linda Sarsour’s comments on Feminism and Zionism, which sought to erase the majority of Jews from the feminist movement — including feminist matriarchs like Betty Friedan. It also denies at least 80% of American Jews a place in American feminism.

Then came the reprehensible silence as hundreds of Jewish families faced the threat of bombs at their JCCs, and we became more familiar with the complete and utter silence and contempt for American Jews and our place in feminism, unless it was politically expedient in a singular tweet.

But the worst had yet to come. Next came another Women’s March leader, Tamika Mallory, calling Louis Farrakhan “the GOAT” for “Greatest of All Time.” We were treated to pictures of Women’s March leaders Linda Sarsour, Tamika Mallory and Carmen Perez smiling and posing for selfies with a man that calls Jews satanic. A man who called interracial couples a threat to the security of Black America. A man who runs an anti-gay, ant-trans anti-Semitic hate group.

As they continued to defend their association, Farrakhan doubled down on his assertions that Jews were “Satanic” and “termites.” And Mallory called us “enemies of Christ.”

She published a long essay defending her lifelong association with a hate group with absolutely no regard for the hurt she had caused, centering solely on herself as the wronged party.

Along the way, Sarsour denigrated anti-Semitism as an issue, claiming in a video made for JVP that despite existing for millennia and having a clear set of defined tropes and traits, anti-Semitism was not “systemic.” “Of course, you may experience vandalism or an attack on a synagogue, or maybe on an individual level… but it’s not systemic, and we need to make that distinction,” she explained… to Jews.

Perhaps most unbelievable to me were the attacks on the Anti-Defamation League. As three out of four of the Women’s March leaders defended their longtime association with a hate group, they had the audacity to demand the ADL be removed from Starbucks anti-bias training for its staff.

The ADL, imperfect as it may be, is a storied civil rights organization. To defend the Nation of Islam, which SPLC dubs a hate group, and claim there can be no engagement with the ADL, is to have fully lost your moral compass.

We are suffering, we are frightened, and instead of standing in solidarity with us, the Women’s March has repeatedly denigrated our suffering, our fear, our history, our oppression.

After two years of fighting for the Women’s March to so much as discuss the situation with a honest broker in the Jewish community, I am worn down. I am afraid that the social justice movement will never be able to heal from its embrace of casual anti-Semitism. I am afraid that I have no movement that will stand for me and for my family in the face of an unparalleled era of American Jewish fear.

Then finally a small sweet victory. Alyssa Milano, feminist, one of the leaders of the #MeToo movement, social justice icon, decided to do something. She decided to say something, right at the moment we needed it most, right as we were mourning and reeling and screaming at each other about what to do next and tired and scared out of our damn minds.

I cried when I read it. We had finally won a victory. It wasn’t everything – or anything- we had asked for. It wasn’t institutional change or even an apology. But it was a highly visible feminist leader saying that she saw our suffering – suffering that had been denied by so many on the left throughout the ordeal of the Trump years.

We. Were. Finally. Being. Seen.

At my house we had a ten minute dance party. We put on Beyonce and threw our toddler in the air as she shrieked with laughter. We had finally had one small, sweet victory and it meant the world.

Then I went back to work. I made a new hashtag, #WontMarchWithHate, with a set of asks to build a stronger, more inclusive Women’s March. It calls for concrete action to make this heal this rift and move forward for a stronger American Feminist movement where we are all welcomed.

Let’s have this small sweet victory grow into more, bigger, broader victories until the we have kicked this ancient hatred’s ass, until it is gone from the Women’s March, gone from progressivism, gone from America.

When Alyssa Milano raised her voice for me, I found my hope again for one sweet evening – and I’m unwilling to let it go.

Thank You, Alyssa Milano, For Standing Up To Hate In The Women’s March