No, Linda Sarsour Did Not Accuse Jews Of Dual Loyalty. But The Right Wants You To Think She Did. 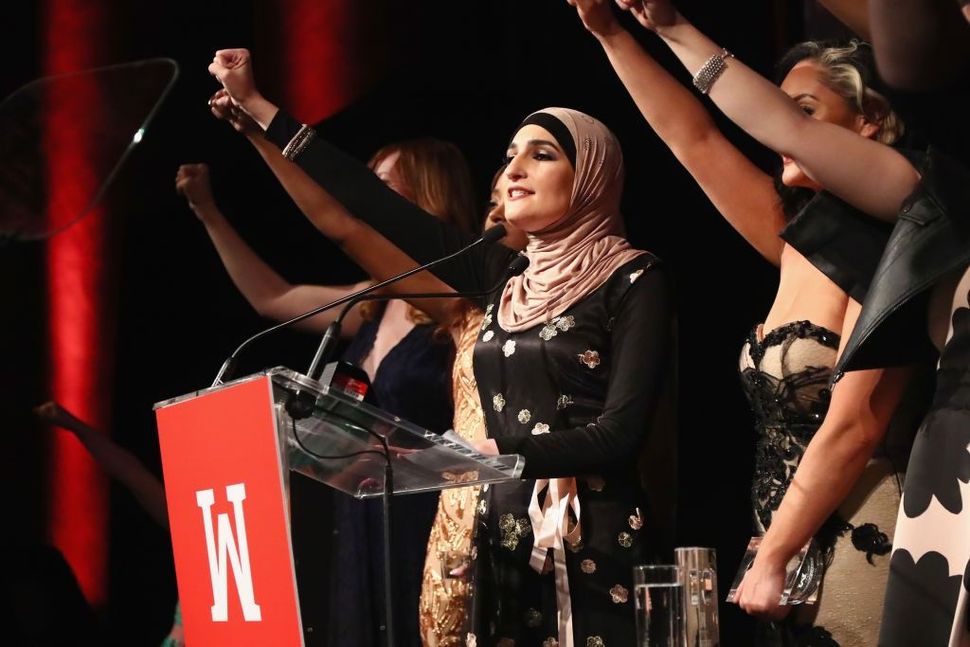 Linda Sarsour speaks onstage at the Ms. Foundation for Women 2017 Gloria Awards Gala & After Party at Capitale on May 3, 2017 in New York City. Image by Getty Images

Linda Sarsour, the Palestinian-American, Muslim, progressive activist and co-leader of The Women’s March, is a lightning rod of controversy.

Her critics will say it is because she fails to live up to her progressive values when it comes to matters of anti-Semitism, and some say she is anti-Semitic herself.

Her supporters will say it is because she is a strong, left-wing woman who wears a hijab, proudly supports the boycott, divestment, and sanctions movement and is firmly anti-Zionist.

Either way, the mere mention of her name is usually enough to provoke a passionate response.

And when she called for support for Congresswoman-elect Ilhan Omar, who Sarsour said she was being attacked by pseudo-liberals who check their values at the door where Israel is concerned, she was quickly assailed for having invoked the anti-Semitic canard of dual loyalty.

But is that really what she did?

After the various controversies around anti-Semitism that Sarsour has been through, two things have become clear.

One is that there are many people lying in wait for Sarsour to make a statement that they can pounce on as anti-Semitic.

And two, Sarsour doesn’t pay those people much mind, so she will continue to be vulnerable to such attacks, whether they are legitimate or not.

For example, when Sarsour passionately and repeatedly expressed solidarity and anguish over the murder of eleven Jews in a Pittsburgh synagogue, her detractors dismissed it as cynically motivated crocodile tears.

And though she has repeatedly raised significant sums of money in response to anti-Semitic attacks, this, too does not move her critics.

Further proof that she simply cannot please her critics came this week when Congresswoman Elect Ilhan Omar drew sharp criticism for allegedly deceiving Jewish voters in Minnesota about her views on BDS. During the campaign, when asked about BDS, Omar said, “I believe right now with the BDS movement, it’s not helpful in getting that two-state solution. I think the particular purpose for [BDS] is to make sure that there is pressure, and I think that pressure really is counteractive. Because in order for us to have a process of getting to a two-state solution, people have to be willing to come to the table and have a conversation about how that is going to be possible and I think that stops the dialogue.”

It seems clear that she was not opposing BDS, but merely questioning its usefulness as a tactic, which is why after the election, when asked about it again, Omar’s campaign spokespeople told the web site Muslim Girl, “Ilhan believes in and supports the BDS movement, and has fought to make sure people’s right to support it isn’t criminalized. She does however, have reservations on the effectiveness of the movement in accomplishing a lasting solution.”

Omar’s two statements are consistent, despite the explicit expression of support in the latter statement that was absent, but not contradicted, in the first. In both, she was merely expressing the common view, shared by the ACLU, that BDS is free speech and is protected by the first amendment. It’s a far less controversial expression than others she made in the past, which were widely publicized during her campaign.

And yet, Omar was accused of misleading her Jewish voters.

Responding to this criticism, Sarsour stepped up to defend Omar. Her organization, Mpower Change, launched a petition with the campaign tag #IStandWIthIlhan.

And Sarsour posted a message on Facebook to promote the petition. In it, there was a sentence that drew renewed accusations of anti-Semitism against her. She wrote that attacks on Omar were “not only coming from the right-wing but folks who masquerade as progressives but always choose their allegiance to Israel over their commitment to democracy and free speech.”

An audience already either suspicious of or convinced of Sarsour’s antipathy toward Jews reacted viscerally, reading this as a repetition of the pernicious anti-Semitic canard of dual loyalty.

Yair Rosenberg, a writer for Tablet Magazine and a passionate critic of Sarsour’s, tweeted “Linda Sarsour is now openly saying that U.S. Jews secretly work for Israel against American ideals, which is a classic anti-Semitic libel.”

More liberal voices than Rosenberg’s also called Sarsour out. Batya Ungar-Sargon, the opinion editor at the Forward, tweeted, “Really, really, really disappointed to see this canard of dual loyalties from @lsarsour. I don’t know if she’s subtweeting my piece which actually defended @IlhanMN but I am pretty upset by this. What a betrayal of the intersectional ideal.”

But let’s slow down for a minute. Did Sarsour really bring up the anti-Semitic, dual loyalties charge?

There is at least one other possibility here, and it is far more likely than the conclusion being so hastily leapt upon. That is that the key phrase here is not “dual loyalty,” but rather “PEP.”

PEP, an acronym for “Progressive Except for Palestine,” refers to the substantial number of otherwise liberal people who find ways to excuse or ignore Israel’s behavior to one degree or another.

The term rankles many American Jews, especially those who support a two-state solution and oppose the policies of right-wing Israeli governments but are devotedly pro-Israel.

It is this group that I believe Sarsour was referring to in her statement, not Jews in general.

And when it comes to PEPs, the term is intentionally meant to include non-Jews as well as Jews.

It is meant to cover the cynical behavior of a politician like Cory Booker, who responded to the massacre of eleven Jews in a Pittsburgh synagogue by backing a nefarious bill in the Senate that, as described by Lara Friedman of the Foundation for Middle East Peace, “reflected an effort to try to police criticism of Israel on U.S. campuses by exploiting claims of ‘anti-Semitism,’ in order to delegitimize and quash criticism of and activism related to Israel.”

While both the Christian and Jewish right wings have lined up powerfully behind Israel, many groups that argue in favor of aggressive Israeli actions and defend positions that deny the basic rights of Palestinians include many people, Jewish and non-Jewish, who support LGBTQI* rights, are feminists, fight racism, support immigrants and work for other liberal causes.

I have met many such people over more than twenty years of activism on the Israel-Palestine conflict. These are people with whom I have broad agreement on many political issues or, at least, have differences that are far narrower on other issues.

In their view, supporting Israel and defending it from criticism are liberal causes. They see Israel as the only democracy in the Middle East, an oasis of liberalism in a sea of oppressive governments.

Many believe that Israel is forced into treating Palestinians as they do, and some also believe that the stories of the harsh life in the West Bank and Gaza are exaggerated.

It is to these folks that groups like Jewish Voice for Peace and IfNotNow — idealistic groups who feel the need to raise a Jewish voice that says that their values can only be genuine if they are applied universally — are trying to counter-balance.

Given the still-raw feelings most American Jews, in all political camps, still have over Pittsburgh, coupled with the latest controversies over Louis Farrakhan, and the unrelenting campaign by the Jewish right to turn the narrative of anti-Semitism away from the alt-right and toward the left, I can understand how Jews — PEP or not — might read Sarsour’s perhaps hastily worded statement as supporting the canard of Jewish dual loyalty.

But they are misreading her words, and that’s got to be confronted.

As real anti-Semitism rises, egged on by the President of the United States, who is shielded in this matter by the Israeli leadership and the Jewish right in the US, we cannot afford to ignore the very dangerous conflation of opposition to Israeli policies with anti-Semitism.

And that, consciously or not, is what is happening with Linda Sarsour.

Mitchell Plitnick is a freelance journalist and blogger, the former Director of B’Tselem’s U.S. Office and former Co-Director of Jewish Voice for Peace.

No, Linda Sarsour Did Not Accuse Jews Of Dual Loyalty. But The Right Wants You To Think She Did.