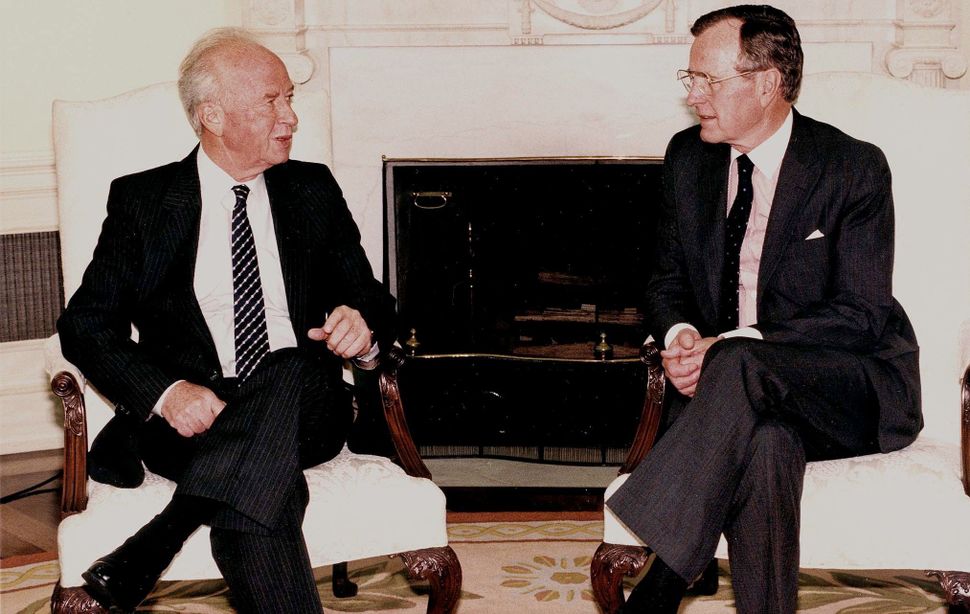 He was accused by the opposing party’s presidential nominee of demanding “unilateral concessions” from Israel and being soft on the Palestinians. His Secretary of State was denounced by some pro-Israel figures as an obsessive hater of the Jewish state who wouldn’t leave it alone.

They led an administration that did not tolerate West Bank settlement growth and made clear the U.S. would not simply continue supporting Israel through a period of expanded building.

I am, of course, referring to former President George H.W. Bush, who died on Friday at age 94, and his Secretary of State, James Baker III.

Perhaps it appears unseemly to pay tribute to the first Bush administration’s efforts to reach peace between Israel and the Palestinians at a time when the prospects for peace are so dismally low.

But as President Trump, Jared Kushner, and Jason Greenblatt begin traveling down this mine-ridden road, it’s worth examining the Bush’s contributions to the peace process. In hindsight, they spelled the practical end to the dream of a Greater Israel encompassing all the territory that was partitioned by the UN in 1947.

While Bush and Baker were determined to jump-start peace talks from the beginning of the presidency, even marginal progress was by no means inevitable. The hardliner Yitzhak Shamir was Israel’s prime minister, at the head of a unity government that would soon become a narrow right-wing coalition similar to the one Benjamin Netanyahu leads today.

And while the Palestine Liberation Organization was undergoing a process of moderation, it had still not recognized Israel’s right to exist or fully renounced terrorism (that would come in 1993). They foolishly supported Saddam Hussein’s invasion of Kuwait in 1991 and celebrated as Iraqi scud missiles fell on Israel, damaging their standing in the United States and in the Arab world.

It’s easy to imagine a more atavistic president, one infatuated with personal loyalty, immediately punishing the Palestinians for their wretched miscalculation and rewarding Israel. Instead, the Bush administration continued to seek opportunities to advance the peace process, even when that meant calling out Israel.

About four months into Bush’s presidency, and two years before the Gulf War, Baker spoke at the AIPAC policy conference. Rather than play to the crowd with the kind of doting performance that has become a staple of this particular venue, the Secretary of State bluntly told the audience that “now is the time to lay aside, once and for all, the unrealistic vision of a Greater Israel” and pursue peace with the Palestinians.

Bush and Baker not only faced stiff resistance from Israel’s government, but from pro-Israel advocates in the United States who saw their actions, including a threat to withhold loan guarantees, as deeply inimical to Israeli security interests.

The main accomplishment of their efforts, the Madrid Conference of 1991, did not result in a breakthrough or a dramatic conclusion of any kind. What it arguably did, however, was publicly break the Israeli boycott of the PLO, which was known to have complete control over the Palestinian delegation at the conference.

Aaron David Miller, a former adviser to Baker, writes in his memoir The Much Too Promised Land, “Madrid produced no agreements, but it broke taboos, legitimized Arab-Israeli negotiations, and provided political cover, time, and space for secret diplomacy to work.”

Madrid opened the door for a still-unrealized vision of two states for two peoples, but it also closed the door on Greater Israel. From that point on, the two-state solution garnered the support of both the Western and Arab states. The Oslo Accords and subsequent agreements established the Palestinian Authority, on which Israel soon became dependent for its security.

As much as certain Israeli politicians pound their chests and pledge their commitment to annexation, no mainstream party in Israel is actually prepared to assume total control of the whole land. Indeed, the naivete of their plans more often involve an assumption that Palestinians are willing to permanently live with the very sub-state arrangements created by Oslo to govern themselves in Areas A and B of the West Bank.

We may never achieve a final peaceful outcome to the Israeli-Palestinian conflict. But in the event a two-state solution is achieved at some point in the future, due credit should be given to Bush and Baker for their persistent determination in prodding Israel to recognize reality.