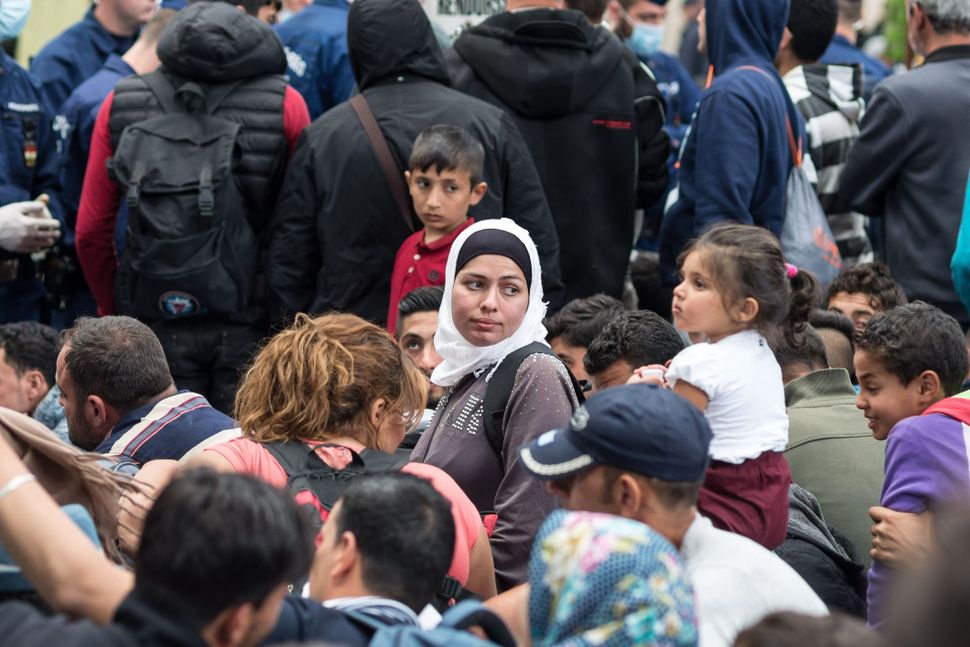 Some years ago, I was discussing the history of Jews in Poland with a Polish academic. He pointed out to me that while anti-Semitism has certain unique characteristics, in pre-war Poland it was part of a web of inter-ethnic conflicts that also included Ukrainians, Lithuanians, and Germans, to name a few.

Timothy Snyder makes a similar argument in “Bloodlands,” his harrowing book about Central Europe under Hitler and Stalin. The Holocaust was a massive crime, with singular characteristics overwhelmingly directed at Jews. But Jews were not the only victims, and the Holocaust was one among many genocidal acts of murder and ethnic cleanings.

I was reminded of the above conversation and Snyder’s book by the renewed evidence of anti-Semitism in Europe. This Monday, the European Agency for Fundamental Rights published a survey of people living in European Union member states who identify as Jewish.

Once again, European Jews don’t feel safe in their own countries. An overwhelming 90% of the respondents to the survey said they felt that anti-Semitism is growing in their country, with 30% reporting harassment.

Perhaps the most chilling statistic is that one in three avoid Jewish events or sites out of fear for their safety. A similar number has considering emigrating.

The EU report is a grim confirmation of last month’s CNN poll on anti-Semitism in Europe, which instead of polling Jews polled the non-Jews amongst whom they live. The results were staggering.

1 in 10 respondent professed to having “unfavorable attitudes towards Jews.” 1 in 4 Europeans believe that Jews have “too much influence” in both finance (of course) and “conflicts and wars across the world.” A significant minority of Britons, Poles and Hungarians believe that the world is more than 20% Jewish; it’s actually around 0.2%.

The CNN poll didn’t only demonstrate that significant amounts of Europeans hate Jews; in fact, on the list of minorities that Europeans hate, Jews scored lowest.

As usual, anti-Semitism is present and frightening. But it’s one of many forms of nationalist bigotry. And this time, they have largely eclipsed the hatred of Jews.

This is because European anti-Semitism is directly linked to ethno-nationalism, the idea that a “nation” means a particular people in a particular place, what the Germans called “blood and soil.” Ethno-nationalism is also behind the immigration crisis, with European governments often choosing to cage migrants, or let them drown, rather than helping them and integrating them. It’s what’s behind the semi-autocratic regimes in Poland and Hungary; to some extent, it’s behind Brexit.

And it’s not just Europe. Ethno-nationalism gave us Trump. Putin’s been adept at exploiting it, too, conflating the Russian nation with the Russian Orthodox Church and invading Ukraine on a flimsy pretext of protecting ethnic Russians. China, which has enjoyed unparalleled growth, is also turning toward policies with strong echoes of blood and soil.

The thing about ethno-nationalism is that you can’t define what you are unless you know what your are not. So it’s no surprise that anti-Semitism is on the rise again in Europe, due to its long history of othering Jews.

The thing it’s crucial to remember is that it’s not only the Jews. In fact, the one issue that seems to unite ethno-nationalists around the world is how much they hate Muslims. Even China is getting in on the act, detaining perhaps a million(!) Uighurs in re-education camps. (Muslim ethno-nationalists hate other kinds of Muslims.)

The American commentariat tend to isolate anti-Semitism, to put it in a kind of mental quarantine, hence the clichéd use of “virulent.” They seem to consider it a unique strain of hatred, almost unrelated to any other kind of bigotry. (Nowhere in Bari Weiss’s recent column about the CNN survey does she mention European attitudes towards other minorities.)

I am a Jew, and I have experienced anti-Semitism. I would not diminish its individual nature or its importance.

But maybe it’s time we expand the view. It is one form of bigotry among many, and the reasons for it, to some extent, are linked to the reasons behind other forms of bigotry.

We all seem to have forgotten what blood and soil leads to: not only genocide but genocides, and unimaginable destruction and suffering.

Gordon Haber is the author of the short story collection ‘Uggs for Gaza.’