The Women’s March Is An Abusive Boyfriend. It’s Time To Break Up. 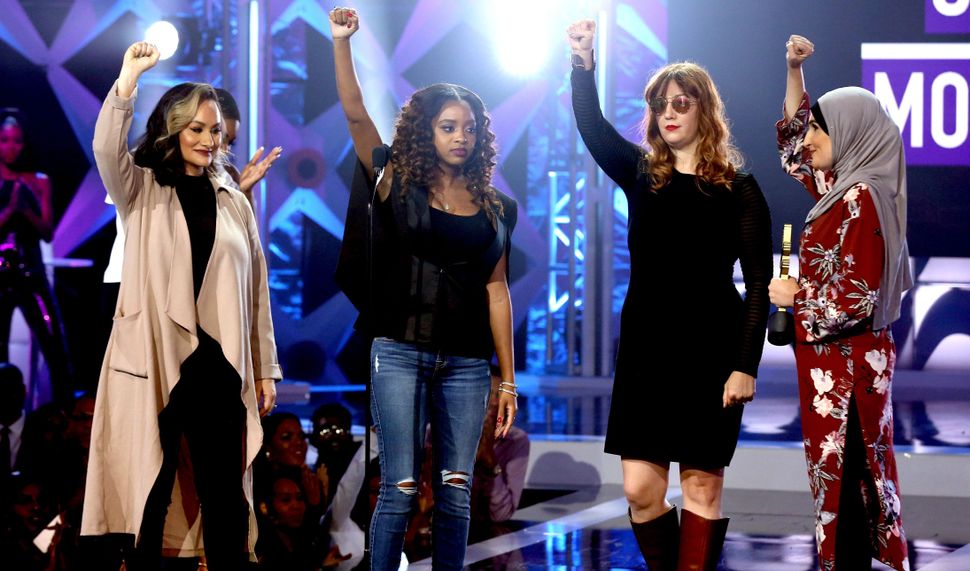 Criticism against the Women’s March has been percolating in Jewish spaces for a while now. From March leader Tamika Mallory’s closeness with Louis Farrakhan, the anti-Semitic leader of the Nation of Islam, to the March’s failure to include Jewish women in its “Unity Principles” to the recent revelation that Mallory and another leader, Carmen Perez, blamed Jews for the slave trade, the Women’s March has struggled to reassure Jewish women of their place.

In the wake of all this spilling into the mainstream media, many calls for the leaders of the March — Mallory, Perez, Linda Sarsour and Bob Bland — to step down. Instead, the Women’s March revised its Unity Principles to include Jewish women. And according to a representative from Women’s March Inc, they will be extending the leadership to include a board of around twenty women, including Jewish women.

To many Jewish women I spoke to, the change was too little, too late. Given that the national co-chairs are never going to go, we must.

I’m calling it: The Women’s March can’t be saved.

The trust is too broken. There has been too much doubling down, too many dogwhistles tweeted out and left un-apologized for. Under the current leadership, many Jewish and LGBTQ women do not feel safe in this organization. We need to accept that some never will.

True, there have been statements that condemn anti-Semitism and homophobia. Sarsour has personally apologized numerous times for the pain the Jewish community has felt.

But Mallory remains adamantly loyal to a hate group she’s spent decades attending events at, which is enough to disqualify her from ever gaining our trust in the first place. She hasn’t moved an inch on her relationship with the Jewish community, hasn’t apologized for saying she “has the same enemies as Jesus,” continues to associate with homophobic anti-Semitic religious leaders like Bishop Swan, and remains unwavering in her victim blaming.

Just last week she told the New York Times that “we’ve all learned a lot about how while white Jews, as white people, uphold white supremacy, ALL Jews are targeted by it,” a statement many interpreted as itself anti-Semitic — not only for the statement in itself, which many Jews agree with, but because Mallory opted to call white Jews out on their privilege when asked about her anti-Semitic behavior.

It’s also true that some of the criticism of the leaders has been hateful. Sarsour especially has often been the target of sheer bigotry; she’s been pelted by false claims that she is a Muslim plant trying to inflict Sharia law on America, lies that her brother was a terrorist, and a hundred more rumors that have nothing to do with the criticizable actions she’s taken.

Yet it’s undeniable that Sarsour is both the Women’s March leader who’s faced the most unfair alt-right abuse as well as the only one who has made any effort to apologize. I believe she is the only one who ever will.

For Jewish and LGBTQ people, Women’s March Inc is like a bad boyfriend. At first, they were everything we wanted. But then some bad habits kept creeping up. We tried to talk about it, tried to reason, tried to foster growth. We signed petitions, we begged, we yelled, and we cried. They gave us half-hearted apologies and didn’t change. Now, we’re two years into this relationship and so many of us are still unsatisfied. So it’s time to say “Thank you — next!” to the Women’s March.

The Women’s March is one institution. It’s not the women’s movement. In fact, none of the Women’s March co-chairs had a emphasis in feminist organizing before they took on Teresa Shook’s vision for marching on Washington in 2016. Bland is an ethical fashion designer. Mallory’s background is in fighting for gun control and Black Lives Matter. Sarsour led Arab and Muslim foundations. Perez helps incarcerated youth.

By marching, we made these women feminist leaders. They need us more than we need them.

It’s time to move on to a better relationship with organizations who get us, to better groups that are not just selling t-shirts and pussy hats. The Women’s March has forgotten what it’s supposed to be about — women.

But there are amazing drama-free relationships we can have with institutions that do that. Instead of rebounding with marches like our old ex, let’s hook up with Planned Parenthood, Emily’s List, RAINN, Time’s Up, Women’s Prison Association, and End Rape on Campus to start.

We can even continue our love for advocating for marginalized women. As of now, the Women’s March Inc Unity Principles profess to defend “Black women, Indigenous women, poor women, immigrant women, disabled women, Jewish women, Muslim women, Latinx women, Asian and Pacific Islander women, lesbian, bi, queer and trans women.” But they don’t have a monopoly on doing that.

Support Black women through Essie Justice group, a nonprofit organization that aids women with incarcerated relatives and centers Black ladies, or Girl Trek, which encourages black girls to have more access to exercise. Fight for indigenous women with Sistersong, which fights for their reproductive justice. Disabled women have advocates at the Special Olympics, United Cerebral Palsy, The Arc, and the Federation for Children with Special Needs. Poor women need the help of Distributing Dignity and I Support The Girls, which provide bras and feminine hygiene products to those who can’t afford them.

We must help trans, bisexual, queer and bisexual women, and people who do not identify within the binary, and PFLAG, The Tyler Clementi Foundation, The Trevor Project, and JQ International are here to help.

We even have our own National Council of Jewish Women and Jewish Women International, which keep our ladies physically and economically safe.

These other leaders aren’t writing Facebook rants about their frenemies like they’re the president of the 8th grade. They don’t hang out with hate groups. They don’t try to get us to excuse the inexcusable, pin women of color up against Jewish or LGBTQ critics, and most of all, their organizing comes out of love for oppressed women, not hate for our oppressors.

A movement that existed solely to oppose Donald Trump cannot outlive him. After the Trump administration is gone, women will still be hungry for change. There are organizations that can better satisfy us. The Women’s March is a yearly event. Fighting for social justice is a daily act of love.

So, put on a break-up playlist. In abandoning the Women’s March, you haven’t given up on your love for activism; you just realized it wasn’t a match.

The Women’s March Is An Abusive Boyfriend. It’s Time To Break Up.