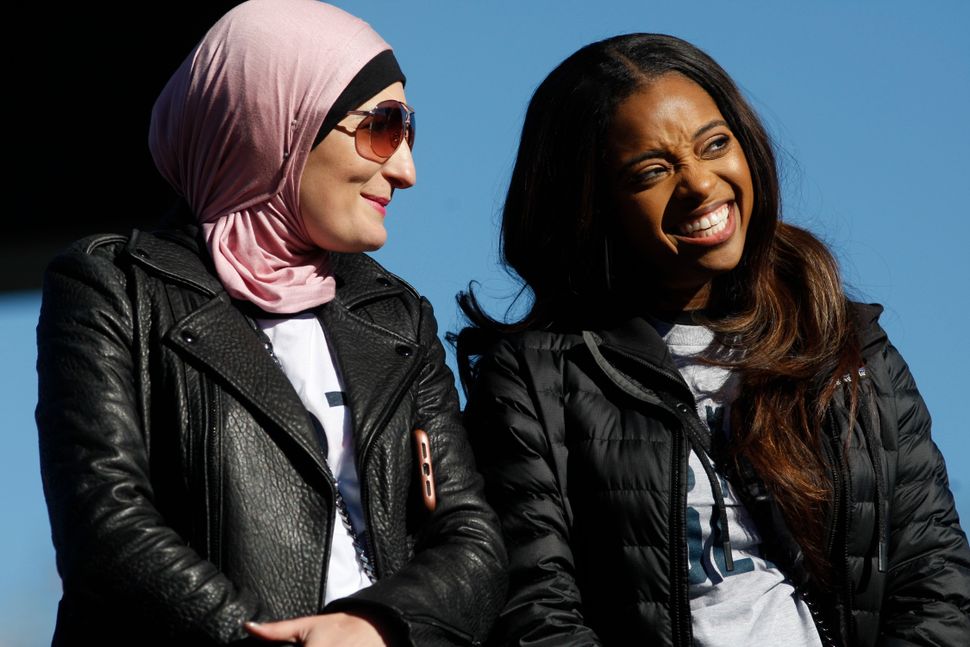 Last week, news broke that actress and #MeToo amplifier Alyssa Milano would not attend the next women’s march due to its leaders’ failure to dissociate with misogynist and anti-Semitic homophobe Louis Farrakhan.

The story brought renewed attention to the controversy, causing the Women’s March to give a second, blame-shifting statement regarding Louis Farrakhan’s open bigotry against Jewish and LGBTQ people.

Women’s March leaders stand against anti-Semitism in all its forms: pic.twitter.com/KLC3W4zZ2H

“Women’s March wouldn’t exist without the leadership of women of color, and we stand with Linda Sarsour and Tamika Mallory. Women’s March leaders reject anti-semitism in all its forms. We recognize the danger of hate rhetoric by public figures. We to say emphatically that we do not support or endorse statements made by Minister Louis Farrakhan about women, Jewish and LGBTQ communities,” the statement reads.

“It’s important to remember that many on the right are thrilled to use any tool they can to divide and undermine our movement,” say the Women’s March.

But it wasn’t the right who asked Milano to comment on the Women’s March’s associations with Louis Farrakhan.

I’m a reporter for The Advocate, the country’s largest LGBTQ publication. The publication is as liberal as it gets; it covers feminism daily and has an editor who specifically covers the issue.

I asked Milano about the Women’s March because Louis Farrakhan is an open enemy to queer people. In 2006, he said, “It’s the wicked Jews, the false Jews, that are promoting lesbianism, homosexuality.” And just this year, he said “Jews were responsible for all of this filth and degenerate behavior that Hollywood is putting out, turning men into women and women into men.”

Collectively, the Women’s March leaders have refused to apologize for praising him and have overlooked his vitriolic hatred of the marginalized communities their intersectional movement claims to represent.

Why is the Women’s March ignoring these details? Why are they blaming the right when the criticism is coming from Jewish and LGBTQ liberals?

Because by painting their critics as hateful right wing nuts or privileged white ladies, they don’t have to hold themselves accountable. Instead, they can shift blame for partaking in bigotry, claiming anyone who won’t tolerate budding up with queer-phobia and anti-Semitism is either an alt-right troll or white feminist.

It’s demonstrably not true. Days before our interview, Milano was harassed on a panel by a far-right conspiracy theory disseminator Laura Loomer.

Laura Loomer asked Alyssa Milano to disavow Linda Sarsour for her support of Shariah Law, and she wouldn’t do it. It’s interesting where “feminists” draw their lines at actually protecting women….. pic.twitter.com/Qay12N54Hd

During our interview, Milano denounced Loomer as someone on the right looking to divide and undermine the women’s movement.

“I don’t even want to give that moment a second breath,” she told me. “Just the fact that Laura Loomer is being considered a journalist to me means that she’s been given enough airtime.”

Milano and I agreed Loomer’s criticism of Sarsour was based in Islamaphobia and racism. Then I brought up the valid criticism of the Women’s March that it has not appropriately divorced itself from a hate group. That’s when Milano said she was disappointed with Sarsour and her comrades for not calling out and addressing Farrakhan’s bigotry.

After Debra Messing, a Jewish woman and longtime ally of LGBTQ people, tweeted out that she stands with Alyssa, Tamika Mallory and Linda Sarsour shared articles published on Medium defending their refusal to directly distance themselves from Farrakhan, whose decades of hate-mongering have earned him his own page on the Southern Poverty Law Center’s archives of horrors.

Their thesis? White women are the problem, not Farrakhan.

Sarsour then wrote up a manifesto about white women and how they should be better allies to organizers of color — a giant subtweet to Jewish critics.

Yes, Messing and Milano are white. But they are only the most visible critics of the Women’s March co-presidents, not the only ones.

Black voices, too, have respectfully begged the Women’s March to do better.

Trans activist Ashlee Marie Preston, who called out Caitlyn Jenner on her white feminism and is a champion for LGBTQ people of color, has directly asked Mallory to cut ties with Farrakhan regardless of what he’s done for the Black community.

“Tamika I think the world of you—However, you had an opportunity to speak up for us in response to Farrakhan’s separatist ideology,” Preston tweeted out in March. “Instead, you bowed out; and that makes you complicit. Anti-semitism, transphobia, and homophobia is trash.”

Tamika I think the world of you—However, you had an opportunity to speak up for us in response to Farrakhan’s separatist ideology.

Instead, you bowed out; and that makes you complicit.

Anti-semitism, Transphobia, and homophobia is trash.

She then posted a video on Facebook captioned “No friend to anti-Semitism, homophobia, and transphobia can possibly be a friend to me,” and explained, “The reality is, at the end of the day, you cannot be an ally if you are an ally to the people who are harming us.”

“This is a larger part of the conversation about how the African-American community still continues to cherry pick which black lives are important and which one’s aren’t,” Preston asserted, referencing the intersection of LGBTQ and Jewish black people. “Personally, I think Louis Farrakhan is trash, fight me.”

Sarsour and Mallory are trying to tell their followers that the Jewish boogymen are coming to attack them because we’re Republican white racists.

But their critics are also Jewish black people who’ve stood up against white supremacy in Jewish spaces. Nylah Burton, one of the most prominent Jews of Color who has straight up called out racism in the Jewish community and asserted that white Jews must acknowledge the privileges they receive, criticized the Women’s March ties to anti-Semitism in an op-ed for The Forward entitled “To My Black Brothers And Sisters: I’m Black And Jewish. Farrakhan Is Bad For Us All.”

Ben Faulding, who is also Black and Jewish, also explained in these pages why it’s imperative the Women’s March let go of Farrakhan.

“He exploits the economic depression, resentment and anger of blacks to leverage his own power and status,” Faulding wrote. “He uses the language of liberation and the language of demagoguery in tandem. He is a poverty pimp. No civilized discourse or progress can move forward with him, or anybody who associates with him.”

If anything, it’s the Women’s March who is centering white voices, not their critics.

They are co-opting the realities of white feminism and right-wing bigotry to erase Jewish and LGBTQ people and say our dignity is not worthy of their defense. Instead, they keep on patronizing Jews, claiming anti-Semitism is not the biggest threat, so let’s let it slide!

“Apparently I am the biggest problem of the Jewish community? I am the existential threat, apparently?” Linda Sarsour literally said that at an anti-Semitism panel, a panel that 21,000 people signed a petition arguing that she shouldn’t speak on.

The articles Mallory and Sarsour posted in their defense argue that Farrakhan is not the biggest problem Jews face, because neo-Nazis are.

“We all know the real cause of violence and oppression of our communities. This is well-documented and inspired by vile rhetoric coming from the Trump administration and from members of the Republican Party,” the Women’s March claims in their statement.

Being less of an anti—Semitic, queer-phobic threat than the monsters who marched at Charlottesville is an abominably low bar.

Their argument is literally, “Listen, we aren’t neo-Nazis; isn’t that good enough?”

What is good enough is an apology. Not just to Jews, but to the LGBTQ people that Farrakhan demonized.

It is the allies to both communities like Debra Messing and Alyssa Milano, who used their voices to stand by people more vulnerable than them, who are the true intersectional feminists and allies to communities they don’t belong to. Sarsour, Perez, Mallory, and Bland are not.