Pittsburgh’s Lessons For America In 2019 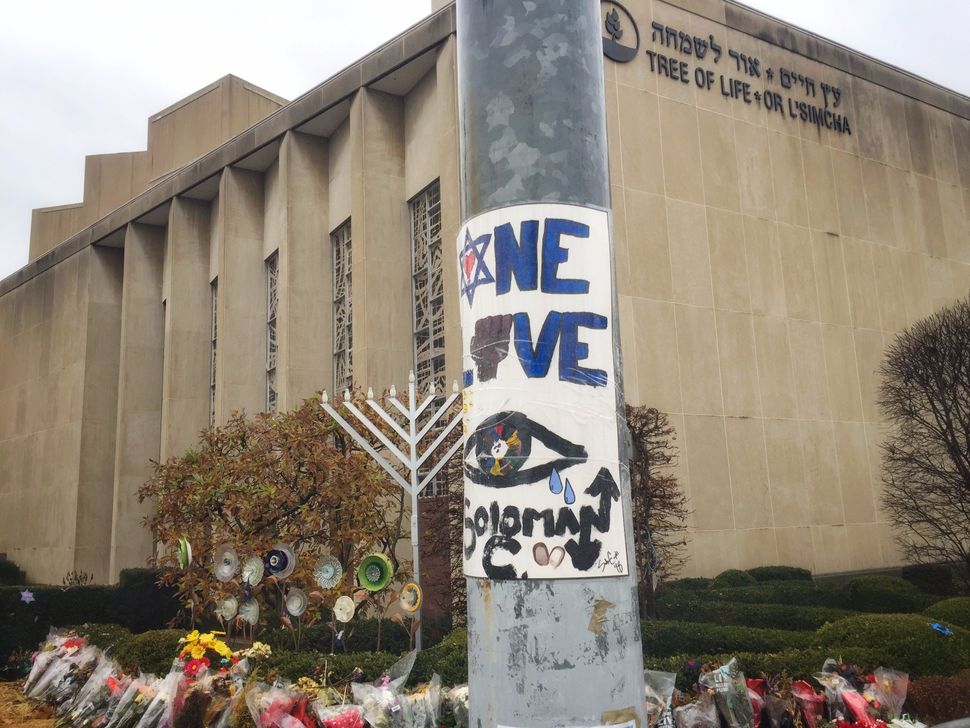 On New Year’s Eve 2018 the rain came down on Pittsburgh’s Squirrel Hill as if to wash away the tragic memories of October 27.

The mass shooting at the Tree of Life*Or L’Simcha Congregation synagogue was the most deadly anti-Semitic attack in America in recent years. But it led to an outpouring of solidarity from the whole city of Pittsburgh. 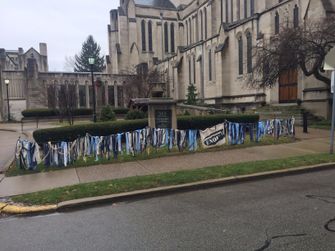 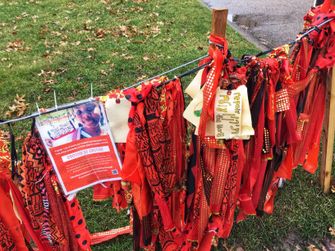 From the “We Love Our Neighbors” poster on the Children’s Institute opposite the synagogue, to the bedraggled ribbons around the “ENOUGH” on the fence of the Calvary Episcopal Church a mile away, signs of the city’s solidarity are still in evidence two months later. 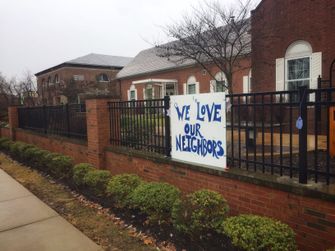 Still bandaged, closed and covered in commemorations for the slaughtered congregants, The Tree of Life*Or L’Simcha Congregation sits opposite the Children’s Institute on the intersection of Shady Avenue and Wilkins Avenue. 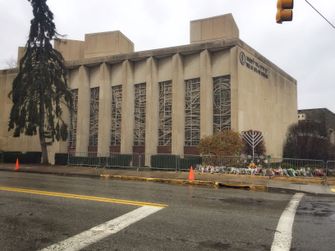 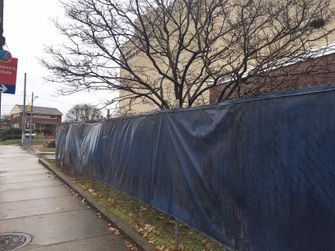 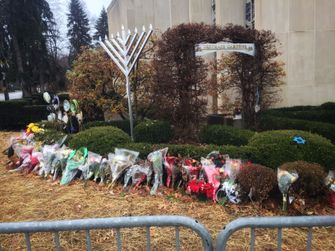 From a block west, Murray Avenue reaches down to the Jewish Community Center where survivors and mourners found succor in the aftermath of the shooting. Along that avenue, telephone poles and bushes hold knitted stars of David. 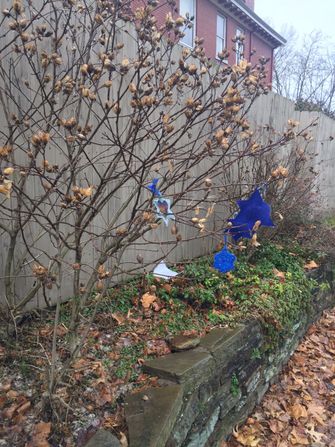 Pittsburgh stars of David in bushes. Image by dan friedman

Like flowers or government stamps they stand proud despite the damp near many houses that also proudly sport the Pittsburgh “Stronger than Hate” signs of unity. 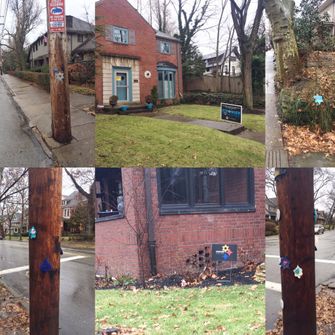 It’s difficult to explain the power of the transformed Steelers symbol to people who are not from Pittsburgh. This is a one-football-team, sports-mad town where on game days everyone, but everyone, wears black and gold. The Penguins, Pittsburgh’s ice-hockey team made a beautiful video of unity that they played to the full crowd before puck drop at their next home game, but the Steelers are the life-blood of Pittsburgh. Replacing the gold star on the Steelers logo with a Jewish star is a quintessential act of civic inclusion. 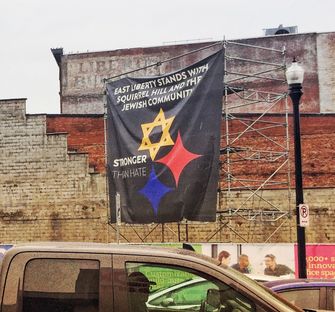 And so it goes. Along the main drag of Squirrel Hill, the shops of Forbes Avenue between the JCC and Shady Avenue display a variety of signs along the theme of “Stronger Than Hate.” From the cafe, to the smoke store, from the Coldstone Creamery to the bagel store, life continues, but so does remembrance. Leaving Squirrel Hill you reach the next neighborhood of East Liberty. Billowing slightly in a construction zone at a significant intersection stands a 20 foot high poster of solidarity: “East Liberty stands with Squirrel Hill and the Jewish community.” 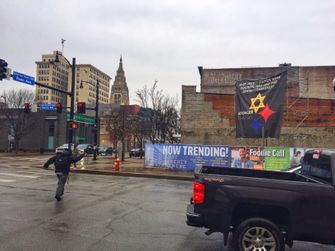 Yes, America has some internal disagreements and yes it has some difficult decisions to make about its political future, but it remains a country built on an ideal of justice that can unite behind decency and fellowship. Despite the best efforts to inflame hatred by certain politicians, foreign powers and bad actors on social media, the tragedy of October 27 still only represents a tiny minority of sick white men.

While the year upon which we embark will no doubt see national organizations promote instruments of mass death, political groups attempt to persecute vulnerable communities and certain individuals use the tools of liberty to stoke the fires of bigotry for personal gain, there are myriad of signs — even from the epicenter of tragedy — that mainstream America gives these actions no sanction.

Let us hope that 2019 will truly see a land where everyone, as George Washington quoted in his letter to the Jews of Newport, Rhode Island, “everyone shall sit in safety under his own vine and figtree, and there shall be none to make him afraid.”

Maybe in 2019, America will learn from Pittsburgh that truly we are “Stronger Than Hate.”

Pittsburgh’s Lessons For America In 2019