I Was Sexually Harassed On Bernie Sanders’ Campaign. And No One Cared. 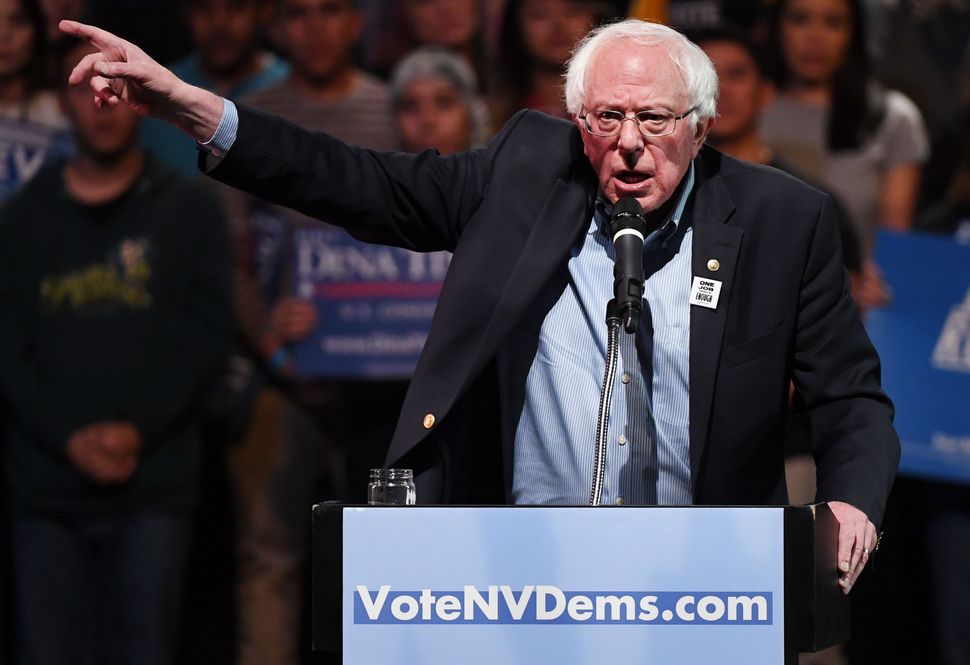 The morning of the 2016 New York Democratic primary, a local voter named Ray came by Bernie Sanders’ South Bronx campaign headquarters where I was volunteering. He asked for a few T-shirts from the campaign.

A few minutes later, in a back corner of the office where I had gone to fetch him the T-shirts, he stepped toward me, grabbed me by the back of the neck and began stroking me up then down from the back of my head to just under my shirt collar.

I froze, dumbfounded. Two or three long seconds later, I heard my own voice spit out one word: “Stop.”

The author on the day of the 2016 primary. Image by Courtesy of the Author

He continued groping me until I pulled away, and sprinted back to my desk in the front of the office.

Ray took his time, though, leisurely ambling to the snack table to pick up, then unwrap, a lollipop. He sucked on the candy while he walked across the office toward the door. He whispered sexually explicit language in my direction as he passed me. Then he chuckled to himself and left.

It seemed like a fairly average case of sexual harassment. But I thought campaign staff should know about it. I assumed that if it had happened to me, it was probably happening to others, and the campaign would want to know.

Last week, Politico uncovered an internal Sanders campaign document alleging staffers had botched addressing sexism and harassment in 2016. The New York Times followed up with a report that exposed other instances of sexual harassment, which had been poorly addressed.

I was not surprised.

In the days after my encounter, I discovered it was impossible for a volunteer to find protocols for dealing with harassment of any kind, or the names, titles, and contact information for the personnel. I spent day and night calling and emailing dozens of campaign representatives to find out how to report it, but no one answered.

After I decided to report the incident, I started looking for a campaign staffer.  I found one — a friendly but naive 23-year-old from a far away state. I approached his desk and told him about the harassment within earshot of everyone in the room.

When he heard the words “sexual harassment,” his boyish smile fell slack and his eyes grew wide. The campaign, he told me, had a zero-tolerance harassment policy. He told me I could fill out an incident report, and thanked me for bringing the matter to his attention. Then he asked me who had done it.

When I told him it was Ray, the guy who had come in to get the shirts, he appeared flummoxed.

“If it was a voter who harassed you,” he said, wrinkling his brow, “then there’s really nothing we can do.”

I was stunned. I told him I was sure that a national campaign like this one would certainly want — and was likely required by law — to make some kind of record of any harassment incident. I also warned him for his own benefit that telling someone reporting harassment that “there’s nothing we can do” is a huge liability for his organization, and a recipe for getting fired from any job.

He seemed to listen, but he never gave me the incident report. Before I left for the day, as a consolation, he offered me his email address and told me to send him my account of the event so he could pass it on to his supervisors.

I sent the email and never heard back from him or his boss.

On my train ride back home the day of the incident, my bravado faded, and I performed the requisite self-hate rituals that every woman is socialized to do after being harassed:

It’s my fault for not fighting back—surely a kick to the kneecap or at least a scream would have been justifiable while his hand was around my neck. I was so stupid to go into a dark room alone with a stranger, so I deserved this humiliation. And why, oh why, did I embarrass myself by letting the entire office hear my complaint?

But after 24 hours, my self-loathing metabolized into anger, and then curiosity: What actually was the campaign’s protocol for reporting harassment?

I scoured the internet to find the Sanders campaign’s harassment policy, and found nothing. I searched in vain for a name and contact information for some type of human resources person; also nothing.

After a few hours of frustration, I decided to reach out to the supervisor of the staffer I had told, whom he had promised to forward my complaint to. But when I searched online, it was impossible to find out his name or title. So I decided to call or email someone over his head, but again my search met the same dead end.

Soon, I resorted to emailing random Sanders staffers—basically anyone whose email address I could find anywhere on the web. I tried a guy named Tony Anthony who was listed as Statewide Field Director on the website p2016.org, and another named Robert Becker, who, according to LinkedIn, was a Deputy National Field Director.

Each brief note I sent said the same thing: that I had been sexually harassed while volunteering for the campaign, and I wanted to report the incident to the proper person.

No one ever responded.

Finally, almost a week after the initial incident, a friend suggested I change my strategy. Rather than working my way up the hierarchy, she reasoned, why not try to talk to someone at the top?

I thought it was worth a shot. I emailed Sanders’ campaign manager, Jeff Weaver, with the note I had already sent to dozens of his subordinates.

A day or two later, I got an email from a guy named John Robinson which included my own email to Weaver. Robinson introduced himself as the Sanders’ campaign chief operating officer. He invited me to give him a call on his personal cell phone, and thanked me for following up. “We need to make sure our workspaces are free of any form of harassment,” he wrote.

I wondered why I had never heard of this man. His name and title, let alone his role as harassment mediator, were nowhere to be found on the internet.

I called Robinson the next day and recounted my entire story—the harassment incident, the initial brush off in the Bronx and then the difficulty finding out any information about the campaign’s harassment policy. He listened patiently and heartily apologized for my experience.

I asked him how often he deals with harassment cases within the campaign as the COO.

He told me he considered himself a behind the scenes kind of manager. He liked it that way, and purposely kept a low profile.

I asked him about how he could adequately deal with harassment cases when no one could get in touch with him to report them.

He said the channels of communication must be working properly, because my complaint had gotten to the right person in the end: himself.

I told him he was mistaken, that none of the staff people I reached out to had done anything with my complaint, and that I had emailed Jeff Weaver directly.

I went on to tell him that from my point of view, there appeared to be no process for reporting harassment, and that I intended to write a letter about my experience to the editor of my local paper.

Then things got a little tense. He interjected to assure me, once again, that there definitely was a harassment protocol, but he was sorry that, in my case, it looked like it had not been followed at the local, state, or national level of the campaign.

Before we hung up, he told me that he would use our conversation as an opportunity to review the harassment protocol at the next staff meeting and remind every one of them exactly what to do when someone makes a report.

He also assured me that he would discuss my case with Bernie and Jeff Weaver.

I don’t know if Robinson ever followed up on his promises in 2016 — I tried to reach Robinson by email and phone for this story, but never heard back — but I now know that my instincts that the campaign was not willing to protect its workers, both paid and unpaid, were correct.

While Sanders’ new Senate campaign sexual harassment policy looks like a step in the right direction, I worry that this debacle could happen again.

Bernie Sanders himself still seems to regard sexual harassment in his campaign as a minor concern, which is the same problematic attitude I encountered when I tried to talk to his staff about it back in 2016.

“I was a little bit busy running around the country, trying to make the case,” he told CNN’s Anderson Cooper when asked why he didn’t know about the allegations.

This answer is at once a weak excuse and a disturbing revelation, and it should call Sanders’ leadership capacity into question among every Sanders supporter, myself included.

From my own experience, I know that there is no good reason he should not have known about the harassment given that the two highest ranking members of his staff knew, at least, about my story and the lengths I went to get someone to listen.

Editor’s Note: The Forward has reviewed the author’s emails to campaign staffers, Jeff Weaver, and John Robinson, and notes from the phone call with Robinson. Neither Weaver nor Robinson responded to requests for comment from the Forward.

Virginia Jeffries is a reporter and student at the CUNY Graduate School of Journalism in New York City. She was born and raised in Pittsburgh’s Squirrel Hill neighborhood.

I Was Sexually Harassed On Bernie Sanders’ Campaign. And No One Cared.