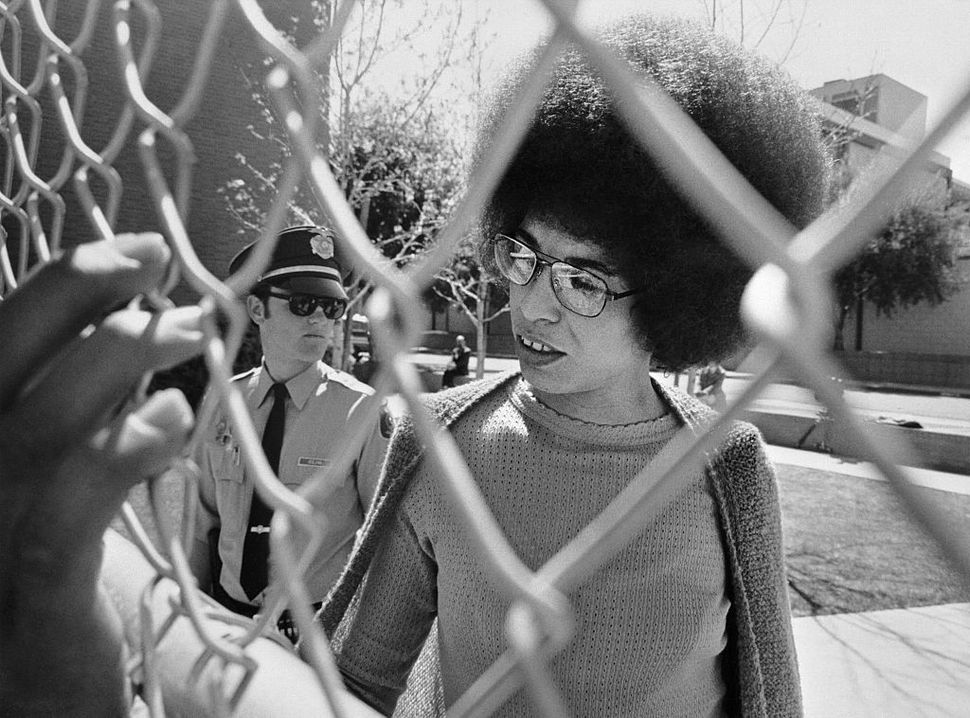 Picture released on April 1972 of US communist militant Angela Davis arriving at the court for her trial , in San Jose. Angela Davis was acquitted on charges of murder, kidnapping and conspiracy arising from the 07 August 1970 shooting in the same courthouse, in which a judge and three other people were killed. Image by Getty Images

In 1908, New York police commissioner Theodore Bingham wrote an extended piece for The North American Review. It was entitled, “Foreign Criminals in New York.” In it, Bingham derided his own city’s immigrants, whom he labeled criminals “of exotic origin.”

While Bingham clearly viewed all immigrants with suspicion and contempt, he reserved his most savage venom for “Russian Hebrews.”

“Among the most expert of all the street thieves,” wrote New York’s top cop, “are Hebrew boys under sixteen.” According to Bingham, this was no accident. It was due, rather, to a cultural pathology among Jews. “[Hebrew boys] are being brought up to lives of crime.” Bingham concluded, “The juvenile Hebrew emulates the adult…. twenty-seven percent of those arraigned at Children’s Court being of that race.”

The Jewish community was, unsurprisingly, outraged. But it wasn’t clear that they could do anything with their outrage. Until that point, many uptown Jews were hesitant to take on the New York power structure (unless, tellingly, it affected one of their own, like when Saratoga’s Grand Union Hotel turned away Jewish banker Joseph Seligman).

This time, the attack was on the “unwashed” Yiddish-speaking downtown Jews. What could be done?

A lot, as it turned out. As a result of an organized Jewish outcry in newspapers like this one and Tageblatt, Bingham was forced to retract his claims, and apologize for his “mistake.”

Today, it’s hard to imagine a public official making such claims about Jews. First of all, Jewish boys are no longer considered as part of a separate race; “Russian Hebrews” are today seen as white Jews.

And furthermore, Jews have much more institutional power than we used to. And thank God we do. Jewish elected officials, the Anti-Defamation League, Jewish federations across the country — all quickly mobilize to fight Jew-hatred when it, increasingly these days, rears its ugly head.

But sometimes, it seems, we focus that power on peculiar targets — targets that don’t pose any material threat to the Jewish people.

Right now, many mainstream Jewish organizations have set their sights on BDS, the loose affiliation of activists who have chosen to boycott and divest from Israel. As a rabbi who has both worked on a liberal college campus and lived and worked in the Bay Area, I have seen up close that BDS can be a cover for thinly (and not so thinly) veiled Jew-hatred.

But that doesn’t mean that all BDS activists are anti-Semitic. Efforts like targeted boycotts of West Bank products and calls to divest from corporations whose products Israel uses for Palestinian house demolitions — whatever our opinions of these efforts, they are principled and non-violent responses to a painfully intractable political conflict. Some of them are driven by Jews.

Meanwhile, we find ourselves living in a time when emboldened neo-Nazis have committed mass murder in an American synagogue, when European governments have outlawed kosher slaughter, when JCCs and shuls are locking their doors out of fear.

But instead of calling for strengthened hate crimes legislation or pressuring the Trump administration to increase anti-terrorism campaigns against neo-Nazis, we find American Jewish organizations supporting efforts like the “Combatting BDS Act of 2019.”

The passage of this act will not make a single Jew safer, in the United States — or, for that matter, in Israel. So why, as a Jewish community, are we focusing our communal power on targeting political campaigns that — again, whatever you think of them — are constitutionally protected speech?

And, moreover, why should it be “Jewish pressure” that has forced the Birmingham Civil Rights Institute from giving a civil rights award to Angela Davis, as some media outlets have reported? Angela Davis, a hero to millions of African-Americans? Angela Davis, who in four decades of activism has apparently never made an anti-Semitic remark? Is preventing her from being honored really how we want to exercise Jewish power?

As I wrote this, the president delivered a speech on national television, once again ginning up baseless fear of immigrants and refugees. In his speech, he invited his listeners to “imagine if it was your child, your husband, or your wife whose life was so cruelly shattered and totally broken?”

Paradoxically, it’s immigrants whose lives are often broken. That’s why they immigrate here in the first place. In the last century, Jews had our lives “cruelly shattered” in Europe and, like today’s migrants, we came to this country in desperate search for a safe haven. To Jew-haters and xenophobes like Commissioner Bingham, we were “street thieves,” who were “being brought up to lives of crime.”

Now those same epithets are being leveled at immigrants from Latin America.

And, tragically for the Jewish community, it’s been common knowledge that much of this rhetoric has come from a Jewish source — Stephen Miller, Donald Trump’s “senior advisor for policy.”

If “Jewish pressure” can prevent a private civil rights organization from giving out an award, shouldn’t that same pressure be applied to a Jew who seems to be the driving force behind a racist and xenophobic public policy? Especially when the rhetoric being used demonize immigrants is the same rhetoric weaponized against Jews in the last century?

It’s no longer 1908. When Jews are outraged, people listen. We have the power to defend ourselves, the power to influence policy makers, the power to take public stands for our principles and beliefs.