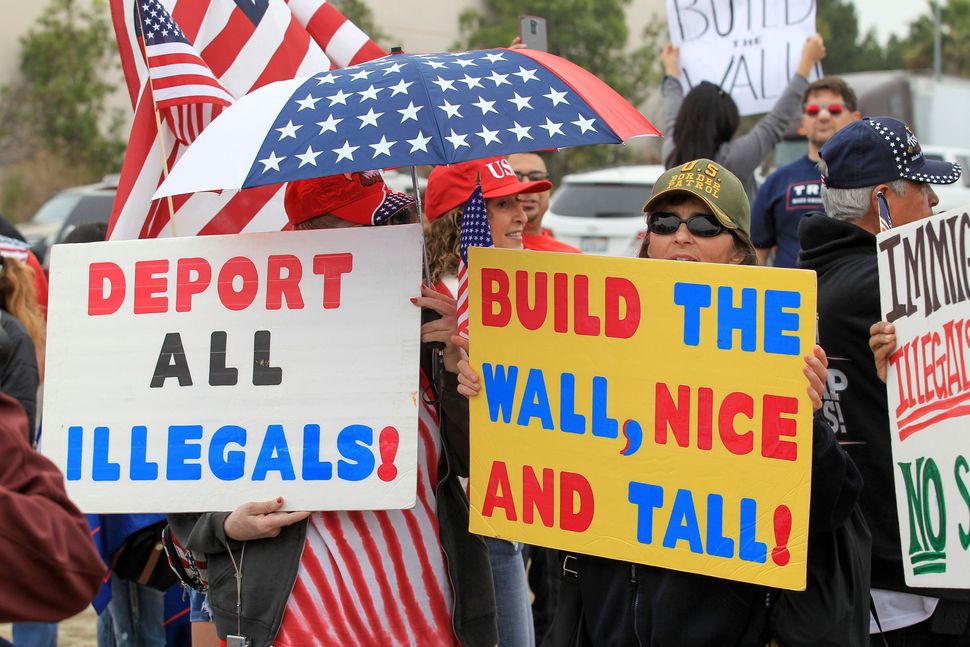 Last night, President Trump spent a handful of minutes spewing falsehoods about the dangers of illegal aliens. He seemed somewhat deflated, not his usually Mussolini-esque self, as he drearily delivered the usual Stephen Miller-composed, combatively factless diatribe with a self-righteousness that can only be described as a classic in the genre of moral turpitude.

The speech was a mélange of grotesqueries. Trump spoke of the worst crimes committed by illegal aliens, followed by the weird case for walls, namely, that rich people have them . “Why do wealthy politicians build walls, fences, and gates around their homes?” He asked. “They don’t build walls because they hate the people on the outside, but because they love the people on the inside.”

Wrong! As Trump might respond to himself. Of course the wall is about hating the other. From the campaign, Trump’s wall was a promise to halt the de-whitening of America that his base lives in racist fear of. And while much ink was and continues to be spilled about how Trump’s base voted for him out of economic, rather than racial, anxiety, the wall always proved the lie to that theory.

And last night, it became clear that Trump’s shutdown, too, was about racism — about keeping immigrants out, even at the expense of jobs, benefits, and even proper sanitation.

With his government shutdown, Trump is making a bet on racism. His bet is that the American people care more about keeping brown people out than they do about their own jobs. Trump is hoping that “economic insecurity” was never actually that, that economic insecurity was always really about racism and that his base will always care more about keeping Mexicans and Central Americans out than they do about their own economic survival.

The worst part of this bet? Trump may be right. We lived under the illusion that Trump voters were working class. But many of them were not. Only a third made under $50,000 a year — and another third made over $100,000 a year. As the Washington Post reported, even among white people without college degrees who voted for Trump, “nearly 60% were in the top half of the income distribution.”

It’s why they haven’t abandoned him, despite the fact that his economic policies have only helped the wealthy, and often hurt the poor. And it’s why he has good reason to believe they wont abandon him over the shutdown, even though it costs more than it would if the government stayed open and ends up costing people benefits and hurts the poor most of all.

So now we wait and see how far Trump’s Ann Coulter-loving base will allow themselves to suffer before they cry uncle. It’s possible that just like Trumpism having no bottom, these people will follow their leader right into a Jamestown-like economic apocalypse which ends in America losing its AAA credit rating and a market cratering to rival the great depression. It’s possible that Ann Coulter and Rush Limbaugh will never release their vice-like grip on the President of the United States; after all, this is their shutdown as much as it is Trump’s, seeing as they were the ones who convinced Trump that the wall was his political hill to die on.

Still, there are some signs that the American people may not actually be as racist as Trumpism needs them to be in order to continue keeping the federal government hostage. A Politico poll shows that 47% of all voters blame Trump for the shutdown, which is good because it’s his fault.

But Trump’s gamble is that the 42% of America who believe his border crisis scam will continue to believe it despite the fact that it’s completely untrue.

It’s impossible to know what will happen next. But the stupidest possible outcome must be the one to bet on.