Nancy Pelosi Is The Anti-Ivanka 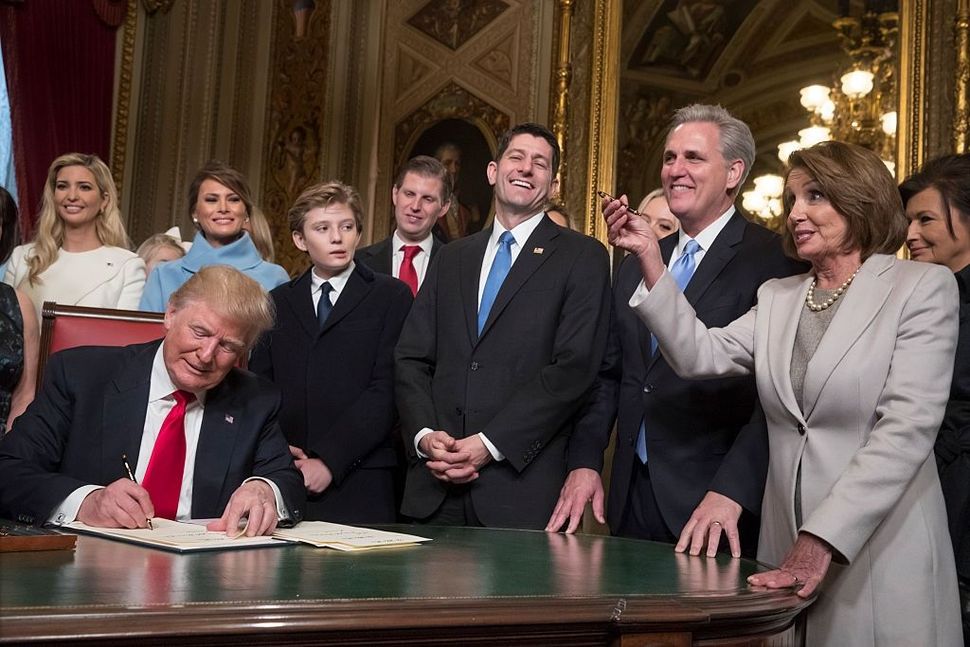 Nancy Pelosi just won a historic victory: She was sworn in for a second term as Speaker of the House. When she won for the first time, Pelosi became the first woman to hold the Speakership. And after leading the Democrats through a blue wave in the midterms, she’s proven her ability to lead.

She’s also proven something else — that she’s President Trump’s worst nightmare. This Trumpian nightmare is best encapsulated by Speaker Pelosi’s response him during a December 12 meeting about the border wall: “Mr. President, please don’t characterize the strength that I bring to this meeting as the leader of the house Democrats who just won a big victory.”

Whether the president noticed it or not, December 12 was an important demarcation line in American democracy. It marked the end of two years of autocratic rule, the end of weak, scared Republicans enabling a barely literate tyrant running roughshod over democracy.

December 12th marked the end of the failing checks and balances that were supposed to mitigate the damage a mini Mussolini like Trump could subject America to.

Pelosi knows that the Americans have given her the gavel with the mandate to hold the president accountable for everything from the kleptocracy to the incompetence to the causal (and not so casual) sexism.

But this isn’t even why she’s Trump’s worst nightmare. To truly understand the threat Pelosi poses, it’s important to look at Trump’s ideal woman, his favorite employee, his daughter Ivanka.

Trump has made no secret of his attraction to his daughter. He said that if she weren’t his daughter, he’d be dating her.

“You know who’s one of the great beauties of the world, according to everybody? And I helped create her. Ivanka. My daughter, Ivanka. She’s 6 feet tall, she’s got the best body,” he said.

But it’s not just her body that Ivanka’s father loves. Ivanka is pretty and blond and malleable and perhaps most important to a narcissist like Trump, a reflection of himself. Ivanka is also less competent than Trump, though that hardly seems possible. Ivanka excels at and not being able to achieve things. Recall her climate “victory” — after organizing five weeks of meetings focused on the Paris Climate Change accords, Trump dumped the agreement and moved on. Then there was her fashion brand, which apparently failed too.

She is the president’s spokesmodel, his blank faced brand representative who, like a filial Vanna White, points lovingly to products like casual racism and not so causal racism that the President tries to sell to the American people.

These are all important services. But the most important thing Ivanka does is she never challenges her father’s decisions. Whether it’s his gross behavior towards women or his racist dogwhistling or his love for the “fine people” in the ranks of the neo-Nazis, Ivanka is silent. The President’s favorite woman just… pretends it’s not happening. Thus, when asked on Good Morning America about her father’s authorization of lethal force on the border, Ivanka said, “I don’t believe that’s what he said.”

.@IvankaTrump to @GMA on use of private email for govt biz & comparisons to Hillary: “There is no equivalency… The fact is we all have private emails and personal emails to coordinate with our families.”

Goes on to say her dad’s concept of “lock her up” doesn’t apply to her. pic.twitter.com/sHxo2LoxiN

Indeed, while Ivanka may not be consistent about her policies or her beliefs, this is the one thing about which she is consistent: her obsession with protecting her father from others and sometimes from himself. She is loyal to a fault, in fact; at 2017’s G-20, Ivanka’s disastrous defense of her father was met with heckling.

Even Trump’s sadistic decision to tear children from the arms of their mothers at the border was met with silence from Ivanka. The toughest she got was after the policy was brought to an end (on paper, anyway). Ivanka then allowed herself to say that jailing children was “a low.” A “low” hardly feels like an actual indictment, considering that he deserved a trip to the Hague.

This is a stark contrast to Nancy Pelosi. Pelosi is not here to flatter Trump’s ego.

On Thursday morning, Pelosi said that she wouldn’t rule out indictment or impeachment. After eating Trump for lunch on December 12, Nancy continued owning him by joking that the wall was compensation for Trump’s non-existent masculinity.

“It’s like a manhood thing with him — as if manhood can be associated with him,” she said in a meeting with House Democrats.

The president likes women who are sexualized sycophants. But Nancy Pelosi is neither of those things. She is a powerful woman who only stands to gain from the fall of the house of Trump.

She is, in other words, the anti-Ivanka.

The irony is of course that Trump did this to himself. By crushing his own party, by ignoring checks and balances, and by trying to undermine democracy, he all but handed Pelosi that gavel.

And by sexualizing women in disgusting ways, he gave a platform to a true feminist icon. He should not have characterized the strength she brought to that meeting on December 12. By doing so, he amplified it.

Nancy Pelosi Is The Anti-Ivanka