Trump Is Using Ivanka As A Prop To Whitewash Anti-Semitism 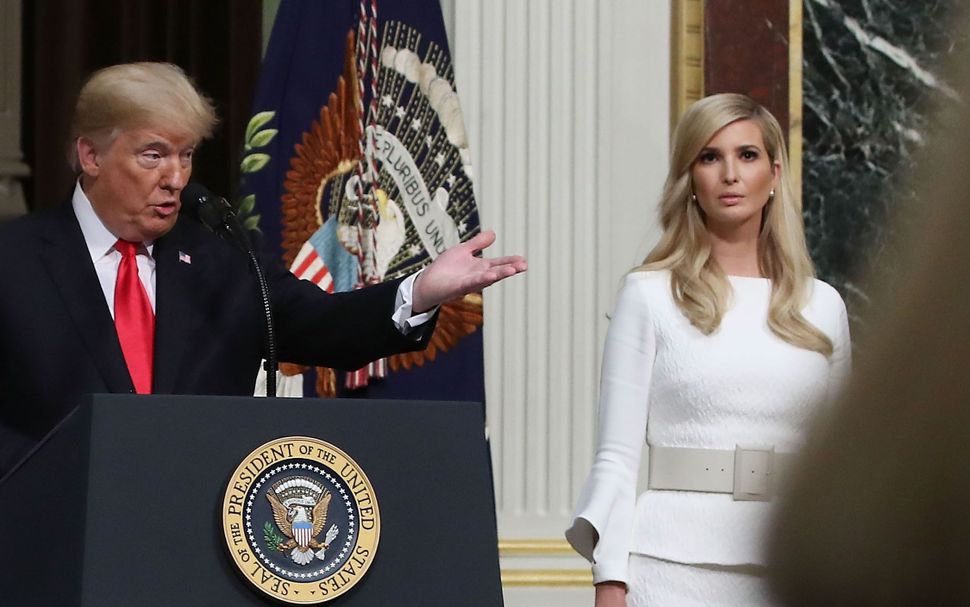 Something you hear a lot from the right when you bring up the President’s penchant for inflammatory language that ignites neo-Nazis is that the president can’t possibly be anti-Semitic because he has a Jewish daughter. It’s a line we have heard uttered by almost every member of the Trump administration at one time or another, as well as from his supporters — including his Jewish supporters — when uncomfortable things come up, like him saying there were “fine people” among the neo-Nazis in Charlottesville, or his white nationalist friend Steve Bannon, or the fact that David Duke sees in him a friend and co-conspirator in the fight for a whiter America.

That’s when they inevitably jump in with the line: “But how could he be anti-Semitic? He has a Jewish daughter!”

After all, Ivanka Trump is widely understood to be the President’s favorite daughter, and he let her marry a Jew — Jared Kushner — and convert to Judaism, ergo he must not be an anti-Semite, or so the logic goes.

It has got to be the biggest logical fallacy of all time.

Not only is Ivanka not proof of her father’s love of Judaism, but she is actually her father’s worst enabler.

That’s what I used to think, anyway, until it was announced that Ivanka would be accompanying Trump to visit Pittsburgh, where a man killed 11 Jews on Saturday. Before today, I used to think of Ivanka as Trump’s Jewish beard. Now, I think Ivanka is proof that he may actually have negative feelings towards Jews.

At 9:50am on Saturday, Robert D. Bowers used an AR-15 to murder 11 Jews as they prayed at the Tree of Life synagogue in Pittsburgh. It was the largest massacre of Jews in American history and not surprisingly, the shooter shared many of the same anti-immigrant sentiments that our president voices vociferously.

Bowers’ profile on Gab, an alt-right social media site, shows an obsession with the Hebrew Immigrant Aid Society (HIAS), a Jewish organization founded to assist Jewish refugees. In fact, that’s the reason he gave for committing his murders: to stop Jews from bringing in more immigrants.

Someone else is obsessed with immigrants not entering the U.S. The shooting took place just four days after the president stood up proudly at a Texas rally and declared himself to be a nationalist, which also coincided with Trump-supporter Cesar Sayoc mailing 14 pipe bombs to the president’s enemies.

The bomb threats, the murder of a black couple by another white nationalist, and the massacre in Pittsburgh were all being laid at the president’s door as the result of his disgusting rhetoric — including by the Pittsburgh Jewish community.

“Many in the Jewish community in Pittsburgh cited what they saw as the president’s divisive rhetoric, which they feel had a role in enabling the violence here,” reported the New York Times.

“He is giving a platform for the closet racists to come out and have a voice,” Steve Gelernter, a Republican who lives in the Squirrel Hill neighborhood of Pittsburgh where the massacre happened, told the Times. He also said he was furious that Trump had not “distanced himself enough from views espoused by white nationalists.” “You never saw any leader speak this way and the country become so polarized,” he said, in a sentiment shared by many.

“For the past three years your words and your policies have emboldened a growing white nationalist movement,” a statement by a Jewish organization in Pittsburgh read. “You yourself called the murderer evil, but yesterday’s violence is the direct culmination of your influence.”

Of course, just ten days before the midterms, Trump couldn’t have this. He tried frantically to change the narrative with a new racist ploy. And when that didn’t work, he realized he had the greatest tool against accusations of anti-Semitism: a Jewish daughter.

On Tuesday, Trump decided to take his daughter and son in law down to Pittsburgh to “honor” the victims of the shooting.

He did this despite the fact that they actually didn’t want him. 71,000 people asked him not to come to Pittsburgh, and the mayor of Pittsburgh, Bill Peduto, also begged him to stay away. “I do believe that it would be best to put the attention on the families this week and if he were to visit choose a different time to be able to do it,” he said.

But what Mayor Peduto failed to realize was that Donald J. Trump wasn’t going to Pittsburgh to honor the dead. He was going to Pittsburgh to launder his anti-Semitism. And the best tool that Trump has in his arsenal is his daughter the Jew. And he and his supporters use her with abandon, just as he used Kanye West as proof that the president loves the blacks.

But why does the president need to keep insisting that he doesn’t hate blacks or Jews? Why the need for these human props?

At the end of the day, Ivanka Trump is her father’s greatest grift: the Jew who enables anti-Semitism, just as she is the woman who enables his misogyny.

Ivanka allows her father to have it both ways — to continue with his bad policy while hiding behind his daughter’s veil.

If Trump had cared for the Jews, he would have honored Mayor Peduto’s request to not come to Pittsburgh.

If Trump had cared for the Jews, he wouldn’t have said, after neo-Nazis marched in Charlottesville, Virginia, “We condemn in the strongest possible terms this egregious display of hatred, bigotry and violence on many sides. On many sides.”

No, Ivanka Trump isn’t proof that her father isn’t an anti-Semite. If anything, she is her father’s tool in his war against the Jews.

Trump Is Using Ivanka As A Prop To Whitewash Anti-Semitism