The Women’s March Failed By Sowing Discord Instead Of Unity 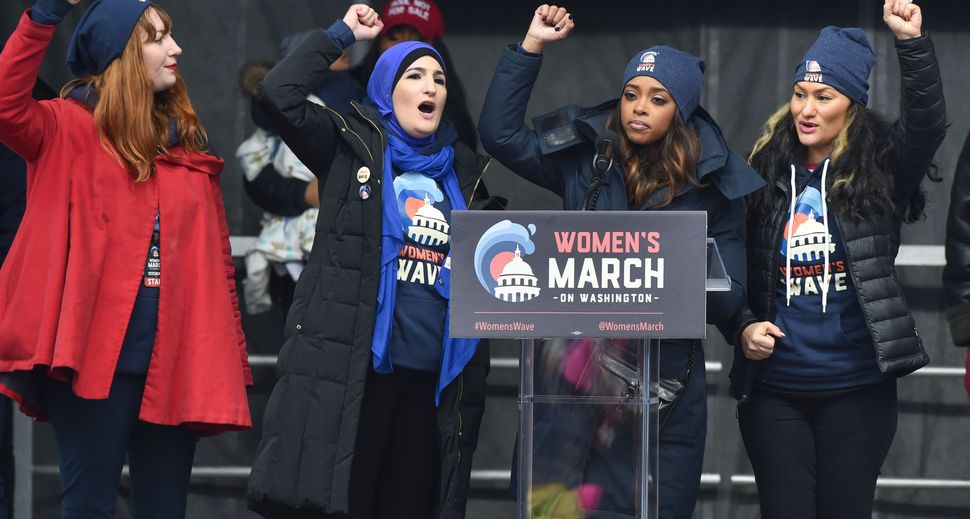 I believe in the power of people to make change – especially women. I have seen women of different religions, ethnicities, backgrounds, socioeconomic levels, belief systems, and lifestyles, come together toward a common goal and make it happen.

That’s why watching the deterioration of the Women’s March has been so painful, both as a woman and — even more so — as a Jew.

For instead of focusing on the 98% they have in common with all women, the “leadership” of the Women’s March, especially Linda Sarsour and Tamika Mallory, insisted on focusing on the 2% that makes us different. And this was their downfall.

By now, Mallory’s refusal to condemn the viciously anti-Semitic words of Louis Farrakahn is famous.

But it’s not just a refusal to condemn Farrakhan that has made Jewish women feel alienated from the March. The truth is, the Women’s March leadership has an obsession with Israel. And instead of being an inclusive space for all American women, it’s chosen to focus on an issue 6,000 miles away, sowing division and discord instead of unity.

Last week, Mallory refused to acknowledge Israel’s right to exist. This was coupled with the inclusion of the boycott against Israel as the only international item in the civil rights section of their new, 71 page agenda.

“One of the biggest threats to speech today are the attempts to silence social movements, including those advocating for Palestinian rights, Black liberation in the United Sates, Indigenous rights and environmental progress,” the document states.

Sarsour has long insisted on her right to boycott Israel and be a vocal anti-Zionist. But this has been amped up of late, with the Women’s March leaders making their understanding and framing of the Israeli Palestinian conflict a default part of their movement, alienating many women and men who want to advance women’s rights without condemning Israel and the Jews (and non Jews) who support its right to exist.

By focusing on what divides them from Jewish women again and again, instead of putting that aside to focus on what unites them, Sarsour and Mallory gave no room for people to work, to learn from the other and come closer together.

By constantly stating their differences, they never allowed for commonality to grow.

By conflating justice in the United States with justice in Palestine, they’ve torpedoed their own efforts, alienating American Jewish women and relying on anti-Semitic screeds to justify it.

And for the life of me, I can’t understand it. Why on Earth have they allowed it to derail their purpose in the US?

The irony is not only that the topic they focus on — Israel, BDS, Palestine — is an issue 6,000 miles away and one they have no chance of affecting.

It’s that here in Israel, we know how important it is to put aside differences and work on a common cause.

Here, Arabs and Jews, religious and non-religious, left, right, and center do that very thing for the common goal of peace.

Take just one example, Women Wage Peace. It’s the largest grassroots movement in Israel whose purpose is to promote a resolution to the Israeli-Palestinian conflict. Today, the movement has more than 40,000 members. Its membership includes women from right, center and left; religious and secular. The movement includes Jews, Arabs, Druze and Bedouin; young and older women; women from the center and from the periphery.

How do they accomplish this? Their mission states in no uncertain terms that “Pragmatism is key”:

“WWP is not an ideological movement; its members reflect diverse ideologies. What is common, however, to all members is the belief that an agreement that is respected and accepted by both sides will meet the diverse needs of Israeli society. Thus despite members’ differences, all are ready, willing and interested in cooperating in order to reach their common goal.”

I saw this first hand in my own city. It’s how we got our current (female) mayor elected after so many years of corruption and neglect. Women — and men — of all different backgrounds and religious levels worked on various projects and in various forms towards a better community for everyone. Sephardic, Ashkenazi, National Religious, Haredi, secular, men and women, native Israelis and new immigrants and even Arabs all worked together toward a common goal leaving behind the things that divided us.

I’ll never forget when Member of Knesset Aida Touma-Suleiman, a Christian Arab woman who headed the Knesset committee for the advancement of the status of women, spent the day with us in Beit Shemesh hearing about how women were being marginalized. When someone began to ask her about cultural sensitivity, she promptly shot it down.

“Don’t talk to me about cultural sensitivity; that is only ever used to justify oppression of women,” she said. “I’m not buying it.”

Touma- Suleiman and the women of Beit Shemesh surely disagree on many things, but on this we were in perfect alignment. So that’s what we focused on.

We set aside all the things that set us apart and worked on what we wanted to accomplish together.

I find it tragic that this women’s movement in the US was hijacked by people who care more about what separates them than what brought them together. And I find that they stole from the people of America a movement that could have pushed society forward.

Linda Sarsour and Tamika Mallory will bring no justice to Palestine and far from bringing justice to the United States, they have sown division among communities, friends and allies.

They have brought pain to Jews around the world. It hurts to see my Jewish sisters and brothers trying so hard to somehow save this movement, to try and say that this March is not the nightmare it has become, to deny that they have been othered, left out and scapegoated. It hurts me even to type these words, but I must.

You cannot win this. You have no chance. If the focus is on what makes you different, you will always lose.

To make a better future for all, we must work together by focusing on what we have in common, not what sets us apart.

The Women’s March Failed By Sowing Discord Instead Of Unity