Ilhan Omar Is Right: Anti-Zionist Jews Don’t Speak For Us 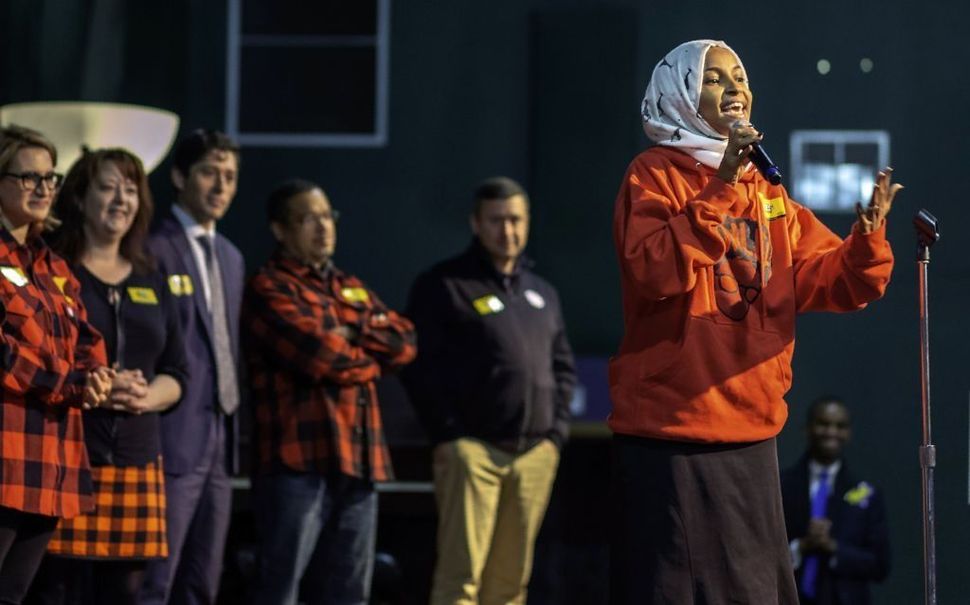 In the wake of Rep. Ilhan Omar unfortunate tweet and apology, a host of anti-Israel Jewish groups leapt to her defense. It was the usual suspects, including the anti-Zionist group Jewish Voice for Peace, the anti-Occupation group IfNotNow, and Jews for Racial and Economic Justice.

These groups were quick to defend Omar on the grounds that she had said nothing wrong — even after she apologized.

.@IlhanMN we have your back. Your leadership and sensitivity are why we stand by you against these bad-faith attacks. Trump and the GOP’s hypocrisy are well on display here. We know that it’s them who put all of us in danger. We won’t be divided. #WeStandWithIlhan

“We have your back,” IfNotNow tweeted at Omar, while JVP launched the “#IStandWithIlan campaign, cheering its success days after Omar’s unequivocal apology. “We Stand Against Anti-Semitism, And We Stand With Ilhan Omar” read a JFREJ open letter.

But anti-Zionist groups rushing to absolve Omar of wrongdoing lack the standing to grant her absolution, for the simple fact that they do not represent American Jewish life and culture. The opposite: They are regarded as fringe organizations by the mainstream Jewish community.

Compare this with Jewish Voice for Peace’s platform. The group recently announced that it is anti-Zionist, which means its membership opposes Israel’s existence as a Jewish State. In other words, contrary to 92% of American Jews, JVP’s members do not support the right of Jewish people to have self-determination in their ancestral homeland.

As for IfNotNow, the group is agnostic on the question of Zionism, making it another example of a group that in no way has the right to speak on behalf of American Jews, a position it ironically acknowledges by focusing most of its messaging on railing against “the Jewish establishment.”

This is how low the Jewish establishment will sink to try to pit Jews and Muslims against each other — the Executive Director of @StandWithUs is promoting Saudi Arabian propaganda about a Muslim feminist leader. https://t.co/6ihq9o9CXL

Not only are they not representative of the mainstream Jewish community, but IfNotNow and JVP routinely stand by people who offend the Jewish community with their blatant disregard for our wellbeing, people like Linda Sarsour and Ilhan Omar and Rashida Tlaib, all of whom have tweeted in ways that many Jews viewed as anti-Semitic. Tlaib accused U.S. politicians of dual loyalties to Israel, a claim Sarsour also picked up when she excoriated “some folks who masquerade as progressives but always choose their allegiance to Israel over their commitment to democracy and free speech.”

They forgot what country they represent. This is the U.S. where boycotting is a right & part of our historical fight for freedom & equality. Maybe a refresher on our U.S. Constitution is in order, then get back to opening up our government instead of taking our rights away. https://t.co/KkmqjR58ZM

These prominent national figures are proud to link arms with their token Jewish friends, like the time Sarsour spoke on an anti-Semitism panel hosted by Jewish Voice for Peace. It didn’t matter to her that over 21,000 people signed a petition asking for her not to participate, noting in a petition that “Linda Sarsour has no authority on anti-Semitism,” and that the “event seems to be calculated to excuse the anti-Semitism that often colors criticism of Israel.” The voice of JVP superseded the voices of the Jewish community at large.

Jewish anti-Zionists whitewashing anti-Semitism doesn’t actually excuse it. And when national figures cherrypick the voice of a marginalized people, it doesn’t show a commitment to listening. It shows that they are willing to tokenize anyone to avoid actually having a difficult dialogue with a community that has been critical of them. Meanwhile, they present those minorities as the majority, rather than actively working with the majority.

Commendably, Omar has recognized this. During a sincere apology on a call with the Anti-Defamation League, Jewish Democratic Council of America, HAIS, Americans for Peace Now, and Bend the Arc, she specifically distanced herself from those who sought to minimize the pain of her tweet.

“I know there are a lot of people who in the last weeks have expressed support in trying to say this isn’t anti-Semitic,” she said, “I do not want to give space or energy to anyone who wants to minimize the hurt.”

Omar herself realized that only working with anti-Zionist Jews is not solidarity with the Jewish community, for which she deserves a lot of praise.

Others have failed this test.

Dear @IfNotNowOrg: You make me feel seen, heard and loved. Thank you for coming over to our #13thDistrictStrong office today to show your support. I am so humbled to have your partnership in serving my residents.

It’s exhausting to see people in power boast that they are allies to all Jews thanks to the approval of tiny anti-Zionist organizations. Those groups don’t even have the approval of most American Jews. If anything, when Tlaib or Sarsour give them a platform, they are speaking over us and handing anti-Zionists a disproportionate amount of power in our name.

This approach is not just gaslighting; it’s pouring gasoline over the wound.

I don’t believe IfNotNow or Jewish Voice For Peace should be censored. Many of their criticisms of Israel and our community are painfully valid. They need a seat at the table.

But it is imperative that non-Jewish leaders not solely speak to them or any extreme group on the opposite side of the aisle.

This doesn’t even mean you can’t fight for Palestinian rights. Most American Jews support two-states; we just want Palestinian self-determination to exist beside ours.

This also doesn’t mean that Jews are a monolith. There will always be disagreements, particularly about the most heated conflict in world history. But there is a consensus around some things, and it’s to that consensus that public figures need to address their apologies — as Omar did. For this, I thank her.

Ilhan Omar Is Right: Anti-Zionist Jews Don’t Speak For Us