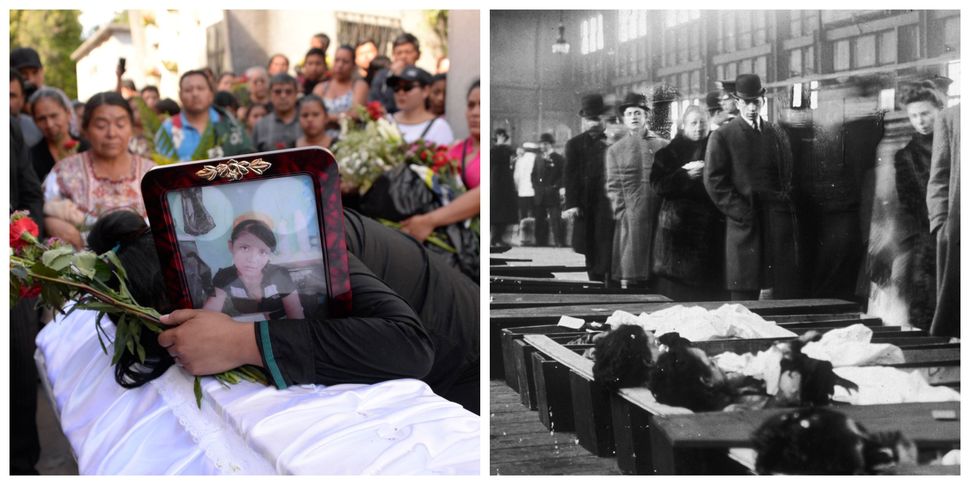 We are coming up on the yahrzeit of a burnt offering.

In 1911, a fire at the Triangle Waist Company factory took the lives of 123 young girls and women. Jewish and Italian immigrants, mostly ages 14 to 23 years old, worked in the factory producing women’s blouses called “shirtwaists.”

The owners of the factory, concerned about theft and “unauthorized breaks,” routinely locked the doors; those locked doors allowing managers to check the women’s purses as they left work.

And so it was that, when a fire broke out in the factory, the available exits were locked. 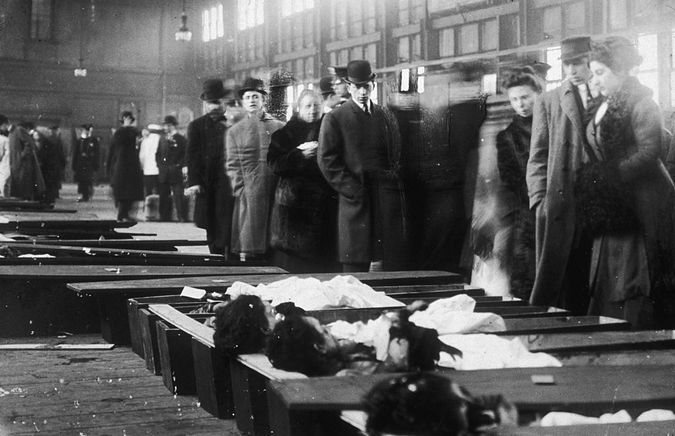 March 1911: People line up to identify the bodies of victims after a fire at the Triangle Shirtwaist Company in New York, in which 146 workers were killed on 25th March 1911. The disaster drew attention to inadequate fire regulations and poor working conditions in the city’s sweatshops. Image by Getty Images

When power and money are valued more than the lives of women and girls, the results are predictably tragic.

Through the work of Jewish and Labor activists, the building where the Triangle Fire took place has been designated a historic landmark by both the city of New York and the federal government.

You would think that we would learn from the meaning of that historic landmark.

I thought of the Triangle Fire last month, when I visited Guatemala. Along with 14 other rabbis from across the country, I was blessed to be chosen this year as a Global Justice Fellow for the American Jewish World Service. While in the country, we met countless inspirational human rights activists and community leaders, true heroes who are fighting for the rights of all Guatemalans — women, sexual minorities, indigenous people — to live together in peace.

In addition to the stories they told of torture, disappearances, and genocide, we learned of 41 girls who died in a fire in an orphanage on the outskirts of Guatemala City. Reports of rape, unsanitary living conditions, and torture plagued the government-run orphanage for years.

In 2013, several staff members at the school were found guilty of sexual abuse. On March 7, 2017, the girls staged a public demonstration protesting their treatment. The next day, a fire broke out in the orphanage. Like at the Triangle factory, the doors were locked.

Was the fire set by the government as punishment? Nobody can — or will — say for sure. 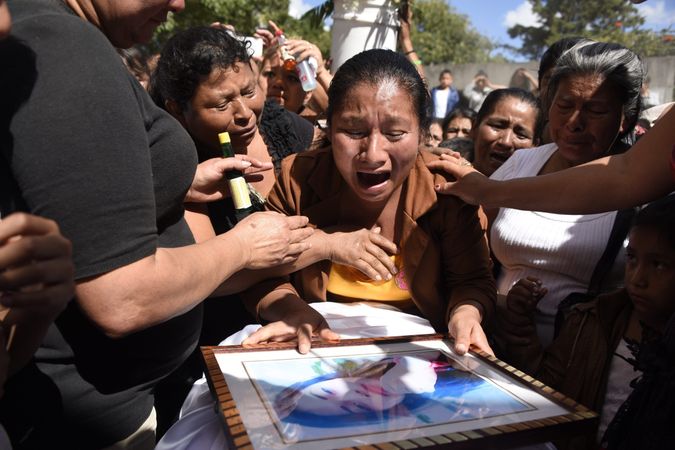 Marta Lidia Garcia cries over the coffin of her 17-year-old daughter Siona Hernandez, who died in a fire at a state-run shelter, during her funeral at the general cemetery in Guatemala City on March 10, 2017. Image by Getty Images

In my work with AJWS, I have learned that this kind of punishment is far too common.

An army-led campaign of massacres, widespread rape, and mass arson in at least 340 villages sent hundreds of thousands of Rohingya into Bangladesh as refugees; according to the UN, it’s a “textbook case of ethnic cleansing.”

In a CNN piece documenting the suffering of the Rohingya, a 20-year-old man named Abul Basar describes what befell his wife and the other women of his village.

“I ran to a nearby hill… and saw [Rakhine militia men] take my wife from the house and rape her. I saw them do whatever they wanted to her. Then 20 people, mostly women, were put inside a house and burned alive.”

At that moment, Basar remarked, “The world went dark for me.”

And these are not the only instances of the use of arson against women whose behavior men find unacceptable. The Protecting Life in Global Health Assistance policy — better known as the “global gag rule” — prohibits US aid from going to foreign NGOs if they support abortions, refer their clients for abortions, or even advocate for the liberalization of abortion laws.

When we value the lives of fetuses over the lives of women, the results are tragically predictable. The same ideology pushing the federal government to restrict access to abortion around the world has been responsible for dozens of bombings and arsons at women’s health clinics around the US. Meanwhile, the gag rule has created a chilling effect for NGOs around the world, who now fear discussing even basic contraception and HIV prevention education, endangering the lives of millions of women and girls across the developing world. 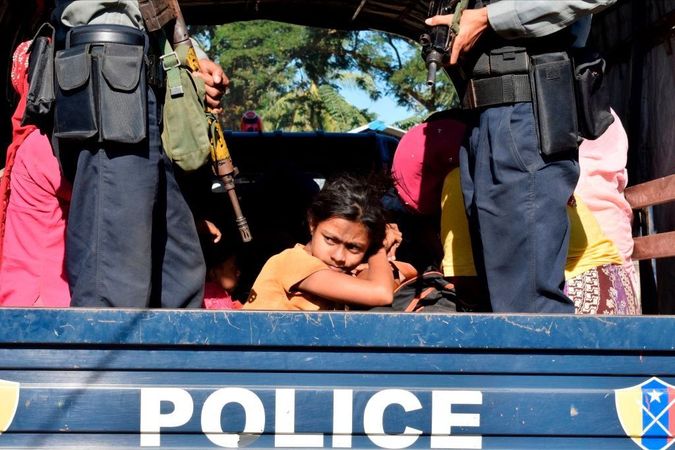 Jewish law, of course, is crystal clear. Pikuach nefesh, saving a soul, takes precedence over the observance of all mitzvot, save for prohibitions against murder, idolatry, and rape.

As we remember the yahrzeit of the Shirtwaist fire on International Women’s Day, as we commemorate Women’s History Month, what an ugly irony it is that US foreign policy seemingly has no regard for the murder and rape of women and girls around the world.

Perhaps you could call that idolatry — the belief that the opinions of men are of greater importance than the souls of women.

As Jews are obligated to stand up for every divine soul on our planet, especially those who currently face the same fires that have consumed Jewish bodies, our cries of “Never Again” must apply to every sweet soul in this world, regardless of ethnicity and gender.

Rabbi Michael Rothbaum is the leader of Congregation Beth Elohim in Massachusetts.