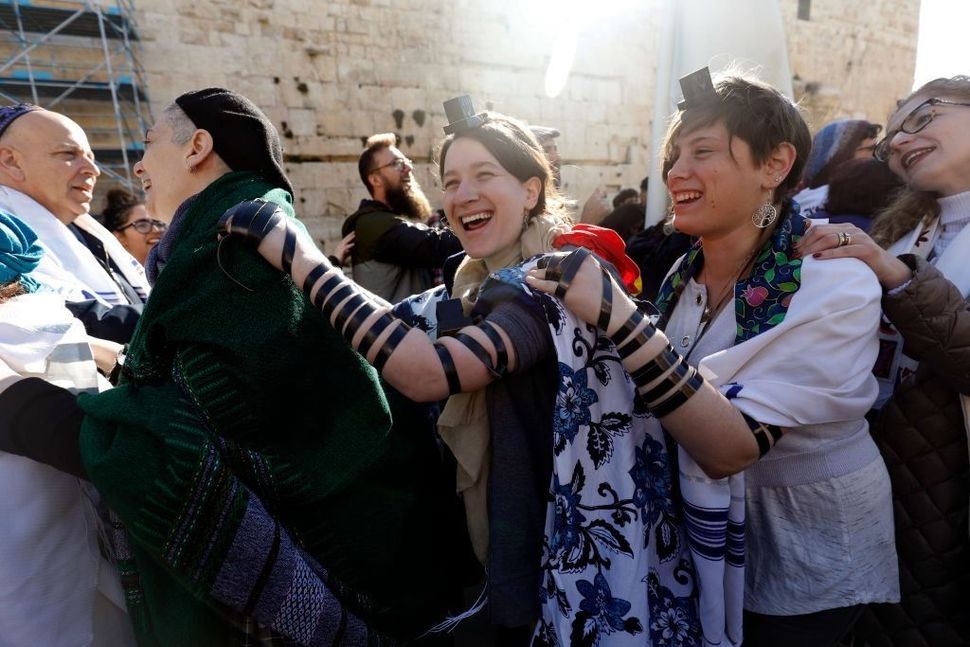 Take a deep breath in, exhale, and congratulate yourself on making it to Friday! Shabbat is almost here. Just in time, it’s International Women’s Day!

This morning, thousands of Jewish women gathered in the holiest place for Jews in the world, Jerusalem’s Western Wall, to pray together in celebration of the 30th anniversary of Women of the Wall, the Israeli social justice organization that fights for women’s rights at the wall. Haaretz reports that the women were violently attacked while in prayer. Both ultra-Orthodox men and women scratched and spat on the praying women, who say that police did not act to protect the women who were being attacked, an accusation the Haaretz reporter at the site confirmed.

We need good news now more than ever. Luckily, Jewish women are that good news.

We bring you a very special installment of our Good News for the Jews weekly feature that focuses on phenomenal women who made the Jewish people proud this week.

Phenomenal firsts: Gadeer Mreeh is set to become the first Druze person to serve in the Israeli Knesset, or parliament. The 34-year-old former reporter told Reuters that this watershed moment won’t be her first: she was the first non-Jewish woman to anchor a Hebrew-language news channel, weathering pushback from inside her own community, when some religious authorities told her parents it was unseemly for her to take such a public job. Mreeh, a Northern Israeli who grew up in the Druze village of Daliyat al-Karmel, is almost certain to get a Knesset seat via Benny Gantz’s Blue and White party, the primary challenger to current Prime Minister Netanyahu’s Likud. Druze, an Arabic-speaking ethnic and religious minority in Israel, make up just two percent of the country’s population. “Now even the religious leaders understand that Druze women can succeed, that we can represent, in a modest and noble way,” she said.

Women literally supporting women: Dana Marlowe, known as the “Accidental Bra Fairy,” is a business executive and mother of two, who just happens to have distributed more than 500,000 bras and 2.5 million personal hygiene products to women who need them. The Forward’s Haley Cohen reports that Marlowe oversees 74 volunteers who collect and distribute bras, tampons, and pads to homeless and needy women in 43 US cities and seven countries around the world with her group, “I Support The Girls.” During the government shutdown, she supplied almost 100 furloughed government workers with feminine products. “I kept thinking about that Pirkei Avot [book of Jewish teachings in the Mishnah] mindset that says ‘you are not obligated to complete the work, but neither are you free to desist from it,’” she said. You can read her full story below.

Women helping women have hope: Agunah literally means “chained” — agunot are women who are chained to their marriages, Orthodox women whose husbands refuse to grant them a “get,” a religious divorce. The many debilitating consequences of this situation for women can include the threat that the women will remain trapped during the years she is able to have children. But egg freezing, a medical service that allows women to preserve an aspect of their fertility, is prohibitively expensive for most, over $10,000 just to start. Here’s the good news: non-profit ORA, the Organization for the Resolution of Agunot, will now offer women egg-freezing options in addition to other forms of support, Hannah Dreyfus reports for the Jewish Week. Dr. Bat-Sheva Lerner Maslow has led the partnership between Manhattan’s Extend Fertility clinic and ORA. “We know that get-refusers can weaponize a woman’s biological clock against her,” ORA executive Keshet Starr told the Jewish Week. For ORA clients, Starr says, “just the possibility of choice — of regaining some sense of agency — lightens the load.”

Valorous women: We couldn’t choose between these three valorous women, so we’re writing about them all.

Devorah Lea Raichman runs a Chabad house with her husband…in the Amazon. The Jewish News Syndicate interviewed her husband, Rabbi Raichman, about the family’s ten years in Manaus, Brazil. We want to shout out to the “Rebbetzin of the rainforest,” who runs a Jewish hub, welcomes strangers into her home, and raises six children in a place where cars stop to give way to monkeys and snakes.

Jewish musician Neshama Carelebach opened up about dealing with her famous father’s legacy since women have come forward saying that Rabbi Shlomo Carlebach assaulted them, sometimes as young girls. “The record came from this moment and I’m so grateful for it, to be alive, to be awake, to be me and to continue to find a way to hear people in pain, to hear from my own pain, to both love and not love my dad in his place far away, and to sing,” she told the JTA.

And Eva Schloss, the Holocaust educator and survivor whose step sister was Anne Frank, did a massive mitzvah this week. She met with some of the teenagers in Newport Beach, California, who played a Holocaust-themed drinking game using cups in the shapes of swastikas. “They didn’t realize what it really meant,” she told the Times of Israel, saying that the teens apologized. “They just thought it was a joke.” Schloss says she believes the students “have learned a lesson for life.”

Torah: In this week’s parsha, Pekudei, artisans continue to craft the holy tabernacle, or Mishkan, and fashion stylish priestly robes, sashes, and golden breastplates. This is followed by a sequence of interior design, setting up a bread plate, and lighting incense. Today, all of these activities are considered traditionally feminine — and therefore somewhat inconsequential — but the Torah considers them to be of paramount importance, and they are done solely by holy, powerful men. When it comes to beauty and detail, the goalposts seem to change depending on whether men or women are in question. How can each of us bring beauty to this unequal world?

This shabbat, find a way to support women.