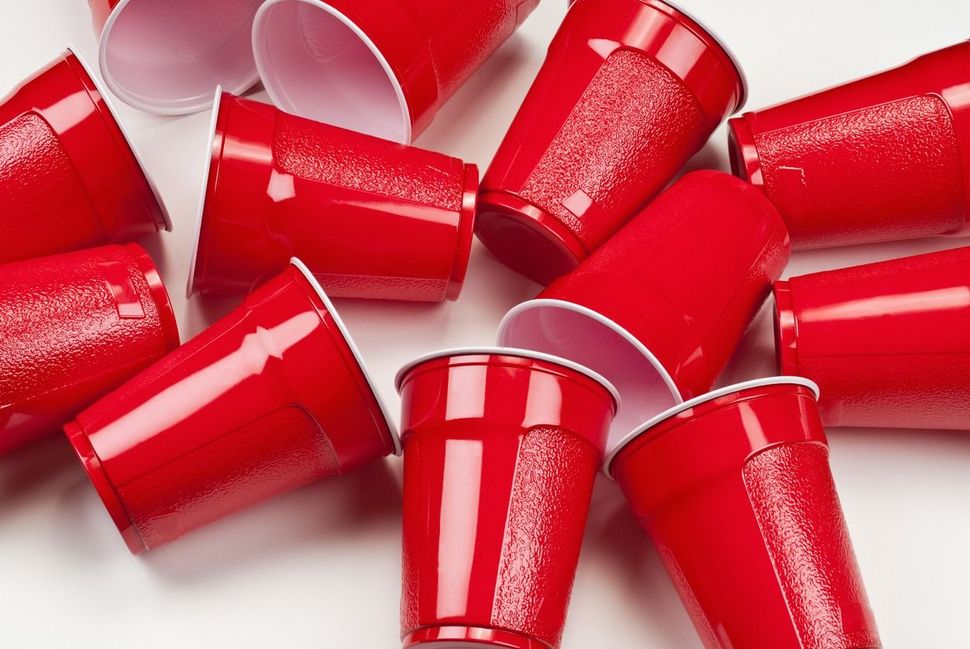 In the grand tradition of the Tiki Brand and the makers of Skittles, the company that produces Solo cups would like you to please not use their product for racist or Nazi activity.

“Our brand is all about helping our fans celebrate food, fun and family responsibly by bringing people together, not tearing them apart,” Margo Burrage, communications director for Dart Container Corporation, wrote to the Forward.

In other words — if you’re celebrating with friends, your cup runneth over. Why bring Nazis into it?

In one of the most expensive zip codes in America, Newport Beach, California, a group of teenagers documented themselves using red Solo Cups to form the shapes of swastikas for a game of beer pong with just a hint of Third Reich flair.

The Los Angeles Times reported that the teens posted images to social media of the ubiquitous cups making a bright red swastika shape, with some teenagers doing nazi salutes.

“We condemn this use of our products and in no way condone or support their use to promote racism, intolerance or violence,” Burrage wrote.

It’s hardly the first time (even in the last year) that American teenagers have proudly and publicly shared images of themselves emulating Nazis — heiling Hitler has somehow been so conflated with teen romance that it appeared this year in a high school Valentine’s Day tribute and in high school prom pictures. But it’s also not the first time that Solo cups, the ultra-popular disposable vessels that have enjoyed a long association with partying in general and beer pong specifically, have been used to take the shape of a swastika.

In August 2017, students at Atlanta’s Lovett School shared photos on social media of a beer pong game they called “Jews vs. Nazis,” in which one team’s Solo cups were arranged in a swastika, the other side’s in a Star of David, the Atlanta Journal-Constitution reported. In that case, one student was expelled and others were suspended. Vice reported that students called the game “Alcoholocaust,” a portmanteau that suggests a level of knowledge such that its creators would know that the Holocaust was not a war between Jews and Nazis, but a genocide.

Two months after the Lovett School scandal, students at the all-girls Catholic St. Teresa’s Academy in Kansas City, Missouri, shared photos of red Solo cups arranged in the shape of a swastika. One such photo was captioned “Girls Night.” St. Teresa’s did not divulge what consequences, if any, the group of students faced, the Jerusalem Post reported.

Those students were not the first to play the game, also known less wittily as “Holocaust Pong.” In spring of 2016, students at a public high school in Princeton, New Jersey, documented themselves playing the game, which included moves like “The Anne Frank.” The move allowed the “Jewish” team to hide one of their cups, until near the end of the duration of the game, the Forward reported at the time.

Instructions for the game surfaced on Reddit in 2013 and 2012. The website The Daily Dot found tweets about the game going back as far as 2011. That date also marks the year Snapchat was launched and the beginning of what would become the dominance of Twitter — it’s possible that Nazis vs. Jews beer pong games date back earlier, but were documented and spread with the rise of social media.

Reddit instructions for the game suggest that its inventors take a selective view of history — the “Nazi” team opens with “‘blitzkreig,’ and each player on the Nazis shoots until they miss, but this is only allowed for the first volley.” Both teams have thirty cups and three players, as if European Jews were also a well organized politically fascist and military entity bent on genocide.

In the case of the Nazi beer pong-playing high schoolers in Newport Beach, Princeton, and Atlanta, their communities are wealthy, heavily educated, and have large Jewish populations. The communities in Kansas City and Cape Coral have smaller Jewish populations and less well-funded schools. Four of the groups used red Solo cups for their games; the students in Princeton used nondescript white cups.

It’s horrifying, but not so surprising, that teenagers want to push boundaries and appear edgy, even if it means treating a mass ethnic genocide lightly. But veteran beer pong players and Holocaust educators alike should come together to remind people — neither mass murder nor the bastardization of classic drinking games should be treated like a joke.