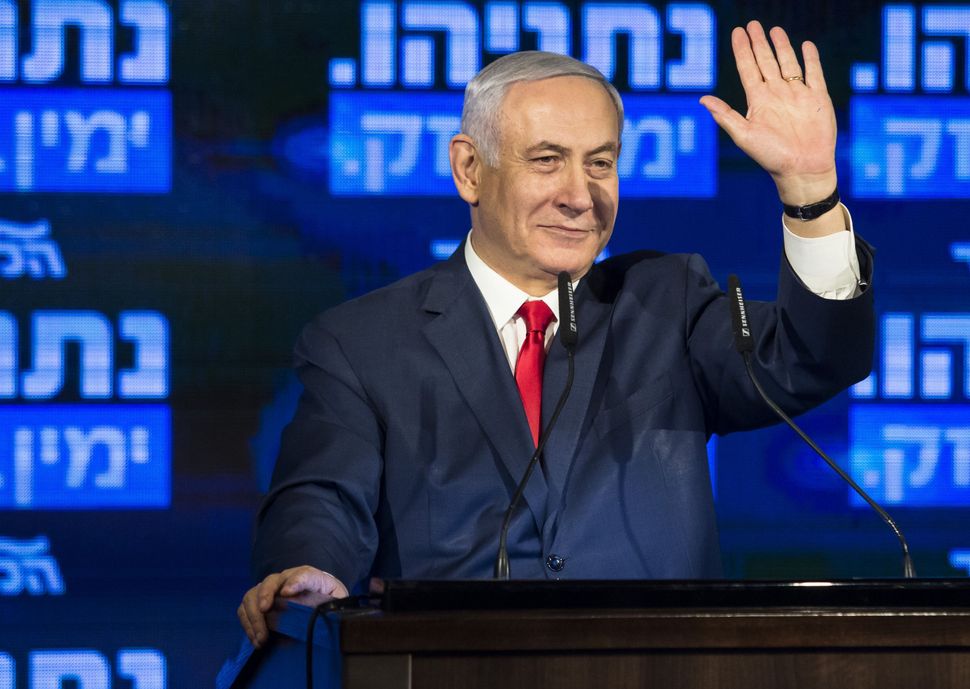 Why would any sane person vote for Benjamin Netanyahu? It’s a question one hears a lot, particularly from dovish American Jews.

Bibi is corrupt, they say. He is racist. He’s been in power too long. He’s ruined relations with the U.S. and turned Israel into a partisan issue. He has transformed the wonderful old Israel of Golda Meir and Yitzhak Rabin into a darker place, unleashing reactionary forces across the globe in the form of his autocratic admirers, from President Trump to Jair Bolsonaro to Viktor Orban.

And look at the alternative, they say. The princely, soft-spoken former IDF chief-of-staff Benny Gantz is the perfect, classy moderate. Why think twice?

Yet despite all this, there is a decent chance Netanyahu will again be Prime Minister after the general election on April 9. And though this may baffle many American Jews, it’s worth trying to understand the underlying logic behind their choice.

To be sure, some Israelis on the far Right are turned on by the rhetoric, the overheated national pride, the flirtation with abomination. But these are not the central issues that drive Israeli voters, nor are they the reasons Bibi keeps winning.

The truth is, most Israelis don’t care about political rhetoric. They’re like American consumers, so infused with advertising that they know how to tune it out and cut through the nonsense. Israelis do care, however, about their neighbors, children, and friends not dying.

Israelis know death is always lurking just on the other side of bad political choices. They have lost people because of politics. And the last time they picked an ex-IDF chief of staff and political novice to run the country, in 1999, they got the Second Intifada, they got coffee shops and buses exploding, they got utter impotence in the face of rampant violence.

People died, real people, whom they once loved but now could only remember.

I still see their faces. Gila was a teenager, a gymnast with Olympic hopes. She wore her dark hair in a single long braid. She babysat my kids in 2001 when I moved to Jerusalem. She was murdered in a bombing at the trampiada in French Hill, where dozens had gathered to hitch rides. The thick concrete bus shelter collapsed on top of her.

Baruch was a guy I played basketball with, muscular, blue-eyed, newly married, a recent émigré from the former Soviet Union. Murdered at the Café Moment bombing attack.

There were those injured, as well. Those permanently devastated from having seen carnage with their own eyes. A woman whose crime was to work as a waitress at that coffee shop on Emek Refaim; a man whose death sentence was averted by missing that bus on his way to work in Haifa, watching it explode after it drove off.

Real people, every one.

These destroyed lives, these national scars, were the direct result of bad political decisions in a dangerous place. How do we know? Because it stopped when Ariel Sharon replaced Ehud Barak as prime minister in 2001. After months and months of being told the IDF was doing “everything possible,” a different prime minister came into office, sent the tanks into Jenin and Bethlehem and Ramallah in 2002, and the dying more or less came to an end.

Most Israelis over a certain age carry that pain, that trauma, into the ballot box.

It’s true that trauma is not always wisdom. And yet, it’s not only Israelis who engage in this. American Jews, too, allow their traumas to dictate where they put their political energy.

Aren’t American Jews, who judge Israeli politics as if their own lives depended on it, traumatized as well? Why are they so much more terrified of the anti-Semites on the American Right than those of the Left? Or by flashes of “fascism” on the Israeli Right than the endless war and poverty that plagued Israeli life when it was ruled by Labor until 1977? And the disasters that followed the 1993 Oslo accords when they briefly came back into power?

Recent, local trauma will tell us a lot more about present dangers than seventy-year-old traumas from other parts of the world. I’d much rather have Israeli security policy dictated by the intifada-traumas of Israelis than the Holocaust-traumas of American Jews.

The bottom line for many Israelis is that they associate periods of Netanyahu’s premiership with relative security and prosperity. And that’s a very big deal.

Because at the end of the day, governing a country is hard under any circumstances, and it’s even harder when you’re trying to keep your citizens safe and prosperous in a part of the world notorious for brutal authoritarianism, and when you’re trying to transition your country from a failed statism to a prosperous market economy. Add into the mix a horrific multi-front civil war across your border to the northeast (Syria), a hundred thousand missiles aimed at you across the northern border (Lebanon), a mess of an Occupation (the West Bank), and a terrorist-run failed-non-state to the southwest (Gaza), and governing becomes really really hard.

And in the midst of all this have been Israel’s achievements over the last decade, and it would be foolish to pretend they had nothing to do with Netanyahu. Booming infrastructure. Tel Aviv’s unrecognizable skyline. Israel’s founding existential natural-resource crises— water and energy— are basically solved.

On geopolitics, Israel isn’t just no longer a pariah; it’s actively courted from Brazil to Beijing. Relations with the Arab world are at their peak. Iran is kept at bay. American recognition of the Golan Heights and Jerusalem is a historic shift fulfilling a consensus Israeli dream. Per-capita GDP is now on a par with France and Japan.

Combine this with a notable absence of IDF reserve call-ups, bus bombs, and mass terror, and the country has done quite well of late.

That’s why, despite that fact that Likud is currently trailing in the polls, Netanyahu is most likely going to stay in office.

That’s why, in an April 1 poll by Israel’s Channel 12, Netanyahu was preferred as prime minister over Gantz by a margin of 53 to 30 percent—a 23-point lead if it were a direct election, with just a few days to go.

This means, however, that if polls continue to show an edge to Gantz’s Blue-White party over Likud, Bibi will most likely take advantage of the final days to say and do things meant to drive far-right voters back towards Likud. And like last time, it won’t be pretty to American Jewish ears.

But it might not even come to that. The truth is, Blue-White could easily lose to Likud. The list they put together, haphazardly in a late-night deal, is not that of a successful governing party. Their top five people are almost comically masculine males. Of them, one journalist (Lapid) and one ex-IDF chief (Yaalon) have some limited experience in civilian government. The other three—two more ex-IDF chiefs (Gantz and Ashkenazi) and a labor union leader (Nissenkorn)—have none at all.

The optics are not good. But neither is the platform: “Neither Right nor Left” is a terrible campaign slogan in its own right, but it’s worse when it’s accurate. Other than being anti-Haredi (which severely limits their coalition prospects from the get-go) and refusing to coalesce with the Arab parties (which are vocally anti-Zionist), their leaders do not seem to share much of a vision for the country—not a strategic one, not an economic one, and not a social one. The one thing they all have in common is a desire to show how different they are from Bibi.

Which is too bad, because they may find themselves having to join his coalition or risk losing any hope of long-term relevance.

And what about Bibi’s corruption? Netanyahu’s supporters see the last two decades as a long string of politicized criminal investigations against right-wing political figures. Ariel Sharon, Tzahi Hanegbi, Yaakov Neeman, Avigdor Liberman, and so on. The fact that so many high-profile cases ended in exoneration (through either dropped charges or acquittal) has deeply undermined public confidence in the State Attorney’s office. Even Ehud Olmert, who served time, was cleared of almost all the charges against him, including those for which he resigned as Prime Minister in 2008.

But more important than that, I think, is the fact that people don’t care quite so much about corruption when the stakes of voting are so high. I remember back in 1991 when David Duke ran for governor of Louisiana against Ed Edwards, a convicted felon. The bumper stickers read: “Vote for the Crook. It’s Important.” Edwards, a Democrat, earned major endorsements from both parties, because the alternative was much worse. He won.

Is Netanyahu corrupt? Some will insist he is, while others defend him. I don’t know him, and I still have faith in Israel’s courts—if not its journalists and prosecutors—to decide.

A more important question is, is Bibi absolutely necessary for the well-being and prosperity of Israelis today? Rightly or not, an awful lot of voters seem to think so. And perhaps American Jews ought to take a deep breath before judging them for it.

David Hazony is the executive director of the Israel Innovation Fund and former Editor in Chief of the Tower.